When I think about extremely successful investment managers, I think of names such as Warren Buffett, Bill Gross, Michael Price, and Bill Miller. The characteristic these gentlemen have in common is that they are (definitely) over the age of 50, which is just fine with me! (Let’s just say that I share that demographic.)  I don’t think nearly as often of those managers whom I sometimes refer to as “hotshots” (sometimes pejoratively).  However, this week I read a story about an investment manager who just reached a pinnacle of success and decided to retire – a professional who hasn’t even yet reached his 44th birthday!

William Sonneborn started his career with Goldman Sachs (GS) at age 22, working in both New York and Hong Kong to help financial institutions to execute mergers and acquisitions. At age 28, Sonneborn moved to the TCW Group, Inc., within which he rose to President and COO, as well as CEO of TCW Funds, Inc.   Evidently, within ten years that became boring, because then he met with Henry Kravis and George Roberts (yes, of Kollberg, Kravis, Roberts Private Equity – now known as KKR) to assume leadership at KKR Asset Management (known as KAM) and CEO of KKR Financial Holdings LLC (KFN). During his five years at KFN, Sonneborn tripled KFN’s “public-markets” businesses!  KFN Board Chair, Paul Hazen, paid tribute to Sonneborn: “He took the reins in December 2008 during the most challenging of environments with the credit crisis in full swing. Under Bill’s exceptional leadership, the company’s share price has increased 15 times in under five years!”

This news grabbed my attention and prompted me to check out KFN as a potential investment. What I discovered is a company that could qualify as Wall Street’s version of a Rorshach Test – what any one person “sees” will be determined as much by that person’s own experience, business philosophy, and investment profile as by the actual “facts” connected with KFN!

Hundreds of thousands of investors have grown to appreciate the tax advantages offered through any one of three business structures that mandate a high level of “pass through” dividends to shareholders each year[1] — Real Estate Investment Trust (REIT), Business Development Company (BDC), or Master Limited Partnership (MLP). However, once a company elects one of those structures, the potential range of investment is restricted. Investors aware of this reality will likely appreciate one of the unique aspects of KFN – it is a limited liability company operating as a partnership[2] for tax purposes, and it operates subsidiaries which function in a similar fashion to each one of the three models referred to above.

This choice makes KFN a true “specialty” finance company, with a very diversified portfolio. Take a look at the mix of its investments:

1)    KFN CREDIT (or “traditional financial company”): this is the arm that functions as a BDC, focusing on financial assets such as below investment grade corporate debt, mezzanine loans[3], high yield bonds, distressed and stressed debt securities, and marketable equity securities.
2)    KFN REAL ESTATE RELATED: obviously, this subsidiary functions like a REIT. Includes both commercial real estate holdings and Real Estate Mortgage-Backed Securities (RMBS).
3)    KFN NATURAL RESOURCES: this subsidiary owns non-operated working and overriding royalty interests in oil and natural gas properties (in the vein of MLPs).
4)    KFN PRIVATE EQUITY: as one would guess, KFN avails itself of the leverage and expertise provided through “parent” KKR & Company (with its 400 analysts): this subsidiary engages in partial ownership of select private equity investments.  It is worth noting that KKR & Co. focuses on the “equity” side of these investments while KFN picks up on the “income” flows related to these investments.

The fact that KFN has intentionally structured itself (as above) in order to maximize its complete flexibility to allocate company assets into those areas most likely to return the optimum balance of return and risk to shareholders during any given period of time.  KFN has tended toward a contrarian investment style – shying away from those investment markets that are currently “hot” in favor of investments most likely to perform moving forward. Most recently, KFN has been focused on assets likely to perform well within an inflationary environment.

As I suggested at the beginning, some investors will be drawn to a company with this sort of creatively flexible investment approach. However, as with any Rorschach Test, other investors will be put off by what they might describe as “too amorphous” a business plan (or not well-defined enough).

KFN has this stated investment return goal:  find investments that provide a return equal to the 10-year Treasury yield PLUS 10%!! So let’s see how KFN’s performance looks on a graph.  Here is a two-year graph of KFN (blue) compared with the S&P 500 Index (brown): 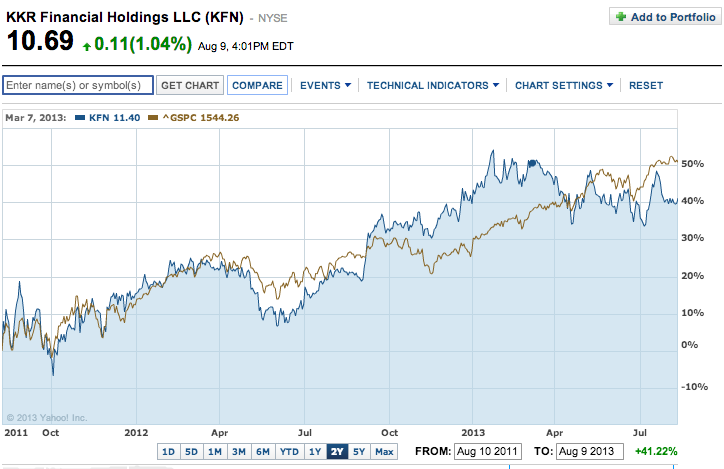 The average observer could note a couple of trends in the above graph:

Beautifully illustrating point 3 above is this graph (a one-month comparison of KFN and the S&P 500): 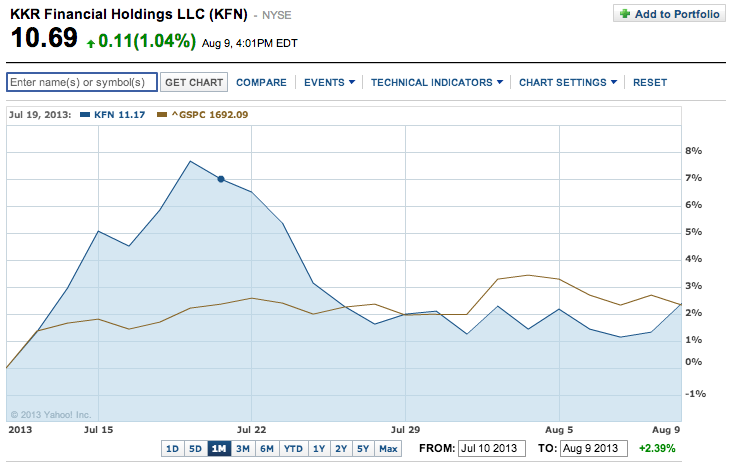 Ironically, as KFN recovered from the May/June swoon prompted by the “Taper Tantrum” interest rate anxiety (resulting from Ben Bernanke comments), KFN illustrated more variability, but ended the one-month period “tied” with the S&P 500!!  If KFN intrigues you, you’ll want to explore its financial reports in more detail. Here is the link to the June 30th 10Q:  http://investing.businessweek.com/research/stocks/financials/drawFiling.asp?formType=10-Q.   You’ll also want to note the fact that KFN has good coverage on its dividend: 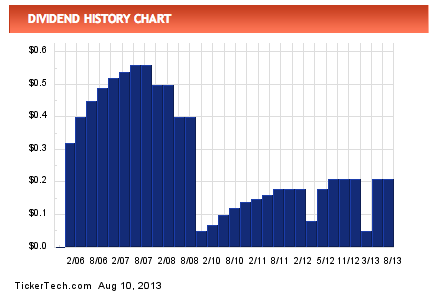 Here is a current two-year graph of KFN showing its 50 and 200 day Simple Moving Averages. It doesn’t need much explanation: 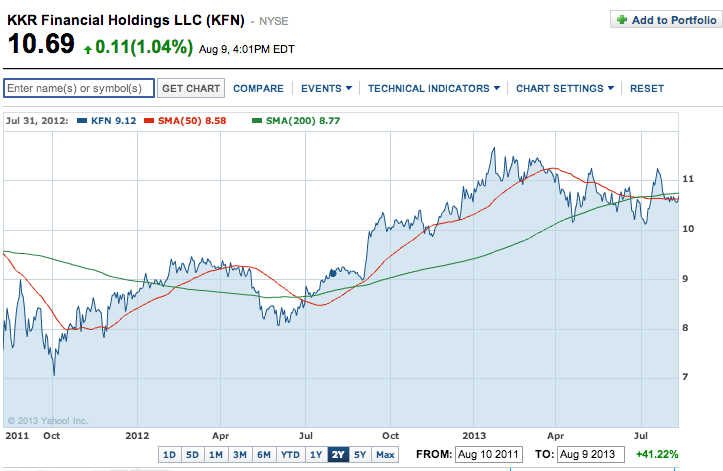 The final question you might be asking is: “With Sonneborn leaving as CEO, who is in line to assume leadership?”

Great question!  Craig Farr has been the head of KKR’s capital markets business since coming on board in 2006. Before coming to the KKR family, Farr worked for Citigroup Inc (C) – where at the tender age of 29 he was promoted to Managing Director of the North American Equity Capital Markets.  Between 2011 and today, Farr’s capital markets segment has accounted for 30% of KFN’s fee-related earnings. That business has grown to thirty-nine dealmakers – who arrange financing for transactions and underwrite stock and bond offerings.

In light of the above, it would appear that the board of KFN has managed to replace one very successful “hotshot” with another. Sure, Sonneborn and Farr are a “far cry” (pun very much intended) from Buffett, Gross, Price, and Miller; but over the course of the next decade, the “investment guru” mantle will be repeatedly passed from the “Boomer” (and older) generation to younger managers (such as Sonneborn and Farr) who have many, many years of potential success ahead of them!

DISCLOSURE: The author has owned KFN in the past, but does not own it currently. Nothing in this article is intended as a recommendation to buy or sell anything. Always consult with your financial advisor regarding changes in your portfolio – either subtractions or additions.

[1] Thereby avoiding “double taxation” – ie. at both the corporate and individual levels.
[2] Investors will receive a K-1 for each tax year invested.
[3] Mezzanine loans are generally a “hybrid” type of instrument:  a loan that includes special features, such as warrants or PIK (Payment in Kind). Because it is not “secured” in the traditional sense, it comes at a higher cost to the borrower, but can be very attractive for newer companies.
[4] http://www.dividendchannel.com/history/?symbol=KFN

Is Vertex Pharmaceuticals Stock a Buy?

Will You Wear a Face Mask to Visit Disney World?