Simply the name itself evokes trepidation among novice traders: Japanese Candlesticks. Then upon delving further into this strange art of technical chart analysis, further angst is felt when discovering the exotic names. 'Enter the dragon', the Bullish Harami, the Piercing Line, the Dark Cloud Cover, the Shooting Star, the Bearish Engulfing Pattern and the Doji just to name a few. But be assured while the names are intimidating, the subject is not and the effort is well worth it. Over 400 years ago in Japanese culture, rice was the currency of the day and the rice markets were dominated by Munehisa Homma. He developed the basics of candlestick analysis that was the staple of technical analysis and carried over to the beginning of the Japanese stock market in 1870. Steve Nison, know as the father of candlestick charting, introduced the western world to candlesticks in 1991 in his classic book, Japanese Candlesticks Charting Techniques.

Before reading further your first question is likely, is it worth it to learn Japanese Candlesticks? Certainly candlesticks are not an infallible chart reading tool but they are well-known to be very accurate, especially when combined with western technical analysis. The information revealed in a candlestick is no different than that of a western bar (open-high-low-close). The difference is that candles are superior due to their visual representation of price action.

Four hundred years of refining the art has led to high probability signals generated by candlesticks. Candles can be represented in single session candles, two session candles, three session candles and more. I refer to 'session' as opposed to 'day' because candles can be used in any time frame from 5-minute charts to monthly charts. Candles are most effective in calling pivot points in the market. When combined with chart patterns, trendlines, moving averages, overbought/overbought oscillators, candles can become extremely accurate.

For the trader first exploring Japanese candlesticks, it can seem quite daunting. There are literally hundreds of candlesticks signals that can be learned. However, in our opinion, less than 20 Japanese candlestick patterns (if learned and applied properly) will incorporate 95% of what you need to know to be consistently successful.

The following is a list of the major signals that if learned, and truly understood will put you ahead of a vast majority of your fellow traders:

Doji (there are several variations of the Doji and it is important to learn them all), Bullish Engulfing Pattern, Bearish Engulfing Pattern, Hammer, Hanging Man, Shooting Star, Inverted Hammer, Dark Cloud Cover, Piercing Line, Bullish Counter Attack, Bearish Counter Attack, Evening Star, Morning Star, Bullish Harami, Bearish Harami, Falling Window, Rising Window. Japanese candlesticks allow the trader to instantaneously assess whether the stock is about to reverse direction, continue the trend or languish. Don't let the exotic names deter your entry into this fascinating world of technical analysis. You will be richer from your experience both intellectually and financially.

If you want to follow a seasoned candlestick trader visit us at www.MarketTamer.com. We have On Demand and Live Classes that show you how to profit from candlestick patterns. To join a dedicated and winning team, visit is at MarketTamer.com 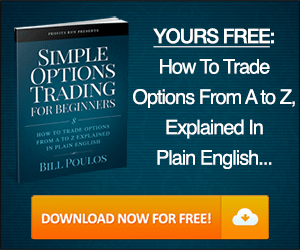 How to Trade Options From A to Z, Explained in Plain English