We all know that, within the equity asset space, we have (for the most part) enjoyed 8.5 months of an upward sloping market.  Most U.S. Index “buy and hold” investors have earned a surprisingly solid return year-to-date (YTD).

In light of that fact, here’s an interesting visual exercise for you. Consider these unidentified graphs – showing most of the YTD performance within each stock: 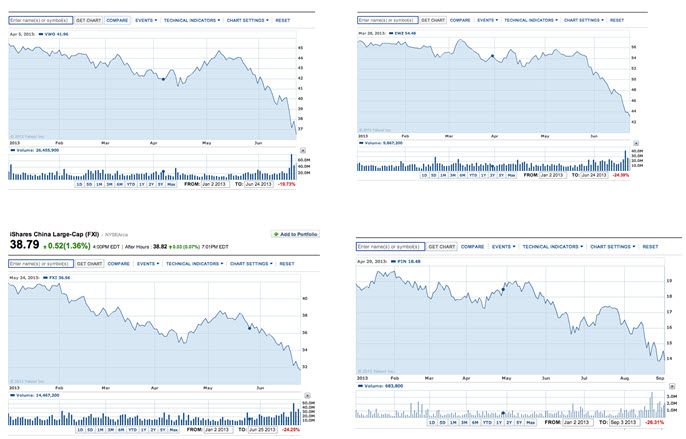 1)    Do any of these stocks look appealing to you?  If “yes”, why?
2)    Can you recognize the broad category of ETF from which these stocks have been chosen?
3)    If I was your financial advisor[1] and was strongly urging that you buy any of these, what would you say to me?… (much more interesting, what might you think?[2])
4)    Do any quotes from any famous investors come to mind as you consider these graphs? 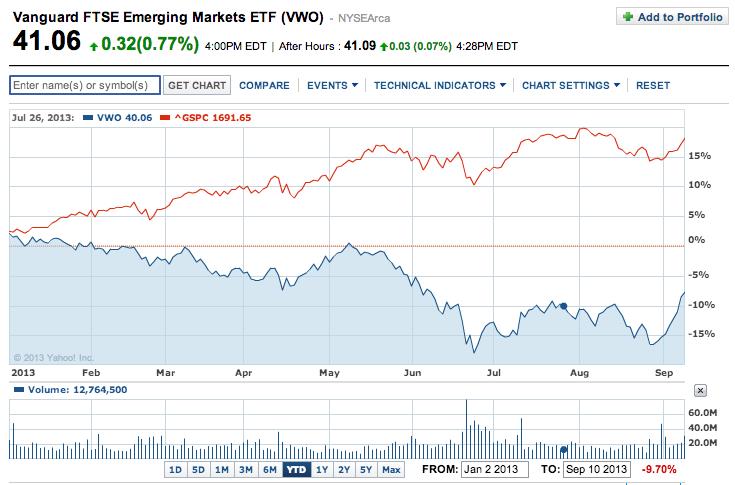 As you can see, these markets have (through August) been nearly a mirror image of one another. As of August 27th, VWO had decreased around 17%, while the S&P had appreciated about 15% — a net difference of well over 30%!

Under those circumstances, it is no surprise that investors have been fleeing in droves during 2013. Between VWO and iShares MSCI Emerging Market ETF (EEM) (the two biggest Emerging Market ETFs), almost $12 billion was withdrawn from those funds between January and August. That ranked those two funds within the top five ETFs in terms of total outflows YTD.

There is an additional dimension that has made the first eight months of 2013 very unusual within the Emerging Market space. Generally speaking, over the course of months, we don’t expect all asset classes within a region to have very poor performance.[3]  However, in 2013, fixed income, equities, and currencies within the Emerging Market space have struggled mightily.  Here is a graph of iShares JPMorgan USD Emerging Markets Bond (EMB) compared with that of the Barclays Aggregate Bond ETF (LAG).

Another idiosyncrasy within this space in 2013 has been the fact that, on a strictly fundamental basis, the Emerging Markets have retained powerful advantages vis-à-vis the developed world: lower sovereign debt levels[4], above average economic growth prospects, bountiful natural resources, and a vibrant, youngish labor force! That is an impressive list!  So what changed in 2013? At least the following:

1)    Many economies within the Emerging Market space are quite dependent upon the Chinese economy – a major trading partner for countless “EM” countries, and China has had a challenging year relative to economic expectations;
2)    Of course, “EM” nations are also dependent upon exports to the U.S. and Europe, so any “whiff” of economic slowdown in China, Europe, or the U.S. is “trouble” for “EM” stocks;
3)    Because the financial “liquidity” of “EM” economies and the total “float” of their currencies are several magnitudes smaller than those of the U.S., China, or Europe, whenever interest rates rise, currencies become volatile, or there is any “big uncertainty” hanging overhead, the “EM” currencies, bonds, and stocks can become extremely stressed.

a.   Illustrating the “liquidity” challenges for many “EM” markets, Bloomberg reported that foreign institutions have pulled over $8.4 billion from just Indonesian, Korean and Thailand stocks this year due to indications of slowing growth there.
b.   This month, the venerable Goldman Sachs (GS) downgraded Indonesia to underweight from market weight, and pared Thailand to market weight (from overweight).

4)    Quickly review the charts at the beginning of this article. When did the downturn begin in most markets?

a.   Yes!  The first three stocks began falling in mid April, then picked up downward steam in June.
b.   The others began a fall in the May-June period.
c.   What common link do these periods have?
Answer:         Ben Bernanke
“Tapering”
d.   Put more simplistically, whenever the U.S. gets financial “sniffles” (or worse), the “EM” markets can come down with a very serious cold – even an “infection”.
e.   Finally, illustrating one of the most dramatic investment “falls” of the year, the economy and stock market of India have truly experienced a watershed year – with the Indian Rupee actually hitting an all-time low recently!

What is my special interest in “EM” equities? I am a “died in the wool” Emerging Markets space “bull”. Over the past several months, I have been astounded by the speedy disintegration of some of these markets. I have added to existing positions in certain “EM” ETFs; and I have been sorely tempted to write to you about them, on the basis of my extremely sophisticated and well-articulated investment dictum: “Geez, gimme a break. These markets have fallen way too far, way too fast!”[5]

What held me back? Do you want an honest answer?  It is simple – a lack of the courage of my convictions. It’s one thing to have an opinion that I express in my portfolio. When I am wrong, the only ones who know are my broker and me.[6]

It’s quite another thing when I share my opinion with all of you and I am wrong. At that point, I am not only frustrated (at a loss), but also embarrassed. And that is precisely the point I want to drive home.

Consider these thoughts from some investing “giants”:

“In investing, what is comfortable is rarely profitable.” – Robert Arnott[8]

“Sometimes buying early on the way down looks like being wrong, but it isn’t! – Seth Klarman[9]

If you remember the Walt Disney’s Pinocchio, you surely remember Jiminy Cricket – the talking cricket who accompanied Pinocchio on his travels and served as Pinocchio’s conscience (and often his brain). I sometimes wonder what investing would be like if a miniaturized Mr. Buffett, Mr. Arnott, or Mr. Klarman was perched on my shoulder during open market hours. What would they say to me?[10]

I strongly suspect that any (or all) of them would say: “You know, Tom, you are absolutely right!  Assuming the world economy does not crash again in the next few years, there is no reason to think that the Emerging Market countries will be doing anything less than “above average” economically and within the securities markets. Not only that, but on a relative basis to the S&P, the 32% value displacement thus far in 2013 is pretty compelling! Let’s start investing in them!”

Would I have acted on that advice? You bet I would! I would have been foolish not to. However, there is no investing “Jiminy Cricket” on my shoulder. I have to depend on myself.

And yet, I already know all the things that Mr. Buffett would tell me if he were here… its all in my head and my common sense. Why do I need the “Buffett Voice” directing me?

The key words there are: “… its all in my head…”.  And that cuts both ways. The basic principles are “in my head”, but I need to develop sufficient confidence to “trust” that information “in my head”!

For better or worse, in September we have heard from a “full-sized” Robert Kapito, the co-founder and president of BlackRock (BLK) – the huge international firm that is the world’s largest asset manager. In an interview on Bloomberg TV, he suggests that the 2013 “EM” plunge I have described earlier in this article is potentially a great long-term “value” opportunity. Specifically, he said: “The emerging markets are going to account for about 60 to 65 percent of the world’s growth over the next 20 years. If you are investing for the long term, this is a good opportunity to get reinvested into the emerging markets.”[11]

INVESTOR TAKEAWAY:  First and most important of all, if you are drawn to the apparent “value” available within the Emerging Market space – do not get carried away! Seek counsel before investing and ensure that your allocations within that space make sense within the total allocation of all your investable assets. In addition, use proper risk management! No “value” stock, no matter how beaten down and seemingly close to “bedrock” support, is a “lock” to be a profit maker for you!

Second, with regard to my “Jiminy Cricket” section above, let me offer this simple thought. None of us needs a miniature Buffett, Arnott, or Klarman on our shoulder. It is a nice fantasy – but we already have a great substitute!!  That substitute is a “Trading Plan” – including a strategy or set of strategies and an appropriate regimen of rules, protocols, or risk management parameters within which we execute, adjust, and/or close out our trades!  As long as we know that Plan, believe in that Plan, commit to that Plan, and sustain that Plan — we have all the “Jiminy Cricket” we need!![12]

DISCLOSURE: The author currently has a position in VWO and EMZ (Brazil ETF), as well as in EMM.  Nothing in this article is intended as a recommendation to buy or sell anything. Always consult with your financial advisor regarding changes in your portfolio – either subtractions or additions.

[1] Don’t worry, I don’t want the job!!
[2] What would you call me under your breathe?
[3] For example, U.S. bonds often perform relatively well when stocks struggle, and vice versa.
[4] No Ben Bernanke!
[5] All you investment entrepreneurs out there are hereby put on notice that I have a patent pending on that particular investment system!
[6] And she doesn’t care as long as the commissions stream in.
[7] As in the “legendary Warren Buffett”. He truly is an “American treasure”.
[8] Arnott writes about quantitative investing, including three books on equity management and tactical asset allocation. For an interview: http://www.fool.com/investing/general/2013/01/14/robert-arnott-why-i-feel-worse-about-2013-than.aspx
[9] An American billionaire who founded the Baupost Group and authored Margin of Safety: Risk-Averse Value Investing Strategies for the Thoughtful Investor. He apprenticed under the legendary Michael Price.
[10] Easy now, folks – let’s be kind. It’s not helpful for you to suggest that any of these fine men would call me such bad names!!
[11] For the record, the BlackRock entry in the general Emerging Market space is the iShares MSCI Emerging Market ETF (EEM). That is the second biggest among the EM ETFs.
[12] In the unlikely event you are not already intimately familiar with the Market Tamer “Trading Plan” – please, please email support and ask for the link. It is very easy to find… and tough to beat!

Why Shares of Editas Medicine Dropped 15.5% in November

Why Lucid Stock Is Falling Today