I’m doing something different today. Usually, a more general, no specific trades version of the Seasonal Forecaster newsletter is sent out to get people familiar with this unique approach to trading. My focus on high probability trade candidates have produced 19 winners out of 19 closed trades so far in the past two months, and several more trades are currently open and headed for gains.

People have been contacting MarketTamer asking to see the track record, showing the results grouped by trade strategy. But what I haven’t done is show what a typical newsletter looks like – the analysis, the trade candidates, and the trade tips…. until now.

Here is one recent trade highlight, exactly as it was printed in the January 21st, 2013 Seasonal Forecaster newsletter. After it, I will detail how the trade worked out.

The business environment for homebuilders has been improving. The stocks of D.R. Horton (DHI), Lennar (LEN), and Pulte Homes (PHM), at the bottom of the pile from 2008 through 2011, began strengthening in early 2012. Lennar has risen from below 13 in 2011 to 42. Last Tuesday, LEN reported earnings and is up 3.4% since.

In October through December, PHM was in a trading range, but has recently broken out:

Pulte is due to announce earnings on January 31st, before the market opens. Checking PHM’s price movement around recent earnings announcements quickly convinces me it is risky to hold during those periods. I wouldn’t be comfortable buying just the stock or doing a covered call, let alone many spread strategies. I would wait until after earnings.

Checking PHM on iVolatility.com I find the Implied Volatility of its options is at the lowest point of the past year. When IV is at a low, that opens the possibility for a straddle option play through earnings. This is a lower-risk trade, but lower-probability trade, that makes money if the stock moves. It doesn’t matter which direction. It loses money only if the underlying stock doesn’t move. So does PHM move over earnings?

In checking PHM’s history, I found it was a somewhat quiet stock until 2007. It seemed to change character then. Perhaps institutions didn’t take much interest in it until then.

I checked the prices on February PHM straddles. PHM closed Friday at 20.49, and either the Feb 20 or Feb 21 straddles could be bought for around 1.83 – that would be 8.9% of the stock price. PHM would have to move at least 8.9% or for a straddle to become profitable, if volatility doesn’t decrease (the characteristics of option pricing means PHM would not have to move the same amount in either direction, but using the cost of the straddle as an overall guide is a good rule of thumb).

So the question becomes does PHM have a track record of moving at least 8.9% over the earnings release?

The market is closed today. As of tomorrow morning, there are 7 trading days before Pulte announces earnings, and February options expiration would be 12 trading days after that. I checked the history of PHM from 7 days before each earnings release through 12 days after. PHM has double-digit moves a good percentage of the time: 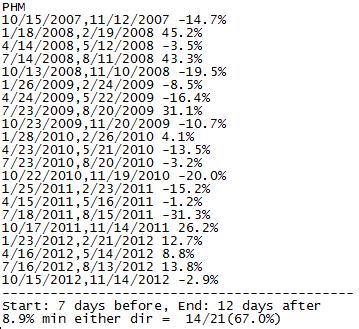 If PHM’s Implied Volatility starts increasing, a straddle trade could quickly become profitable, even before the earnings release.

To raise the probability of success, I recommend exiting a straddle trade as soon as a 20% profit is hit. Right after being filled, I would enter a Good-Till-Cancelled limit order to close the trade at a price that would give me a 20% profit, after commissions.

Stop-losses don’t work well with straddle trades. You have to be prepared to lose the entire amount, so these trades should only be done in small quantities. In practice, I wouldn’t let a straddle end up losing everything. If a few days after the earnings release, PHM hasn’t moved much, I would close the trade and wait for the next opportunity. To gain experience, straddles are easily paper-traded.

How did it work out?

While the PHM February straddle was detailed in the January 21st newsletter, that was a market holiday. On the following day, PHM opened slightly above the previous close, so a PHM February 20 straddle met the requirements. Per the trade strategy, the 20% profit (after commissions) was hit during the day on Monday, January 28th. A 20% profit within 7 days works out to an annualize return of 1,043%.

Of course, there's much more you need to know and many more stocks you can capitalize upon each and every day.  To find out more, type in http://www.markettamer.com/seasonal-forecaster

What’s Up With Hertz Stock Today?

Why COVID-19 Vaccine Developer Dynavax Is Down 6.5% Today