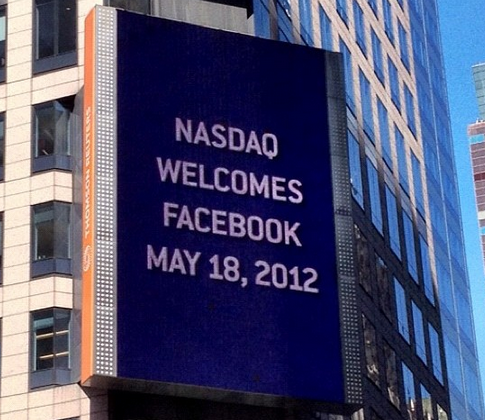 This huge sign should serve as a warning to all investors of the dangers inherent in an IPO!

As we anticipate the approaching Alibaba IPO, I suggest that we reflect upon the realities of a few of the most notable IPOs from recent years: Facebook (FB), Twitter (TWTR), and JD.com (JD). Let’s take a look at them chronologically, from oldest to newest.

We just celebrated the Second Anniversary of the drama that was the FB IPO – on May 18, 2012. It shouldn’t be difficult to remember the full-press hype during the winter and spring of 2012 that led up to that first day of exchange trading for the mega social media giant. In classic form, the underwriters (Morgan Stanley (MS), J.P. Morgan Chase (JPM), Goldman Sachs (GS), and 30 smaller firms) steadily pumped up the offering price of FB to $38/share. That pushed the total “take” from the IPO to $16 billion…  just about $3 billion shy of the largest ever U.S. IPO (Visa (V) from March of 2008).

FB CEO, Mark Zuckerberg, decided to contract with the NASDAQ Exchange for FB’s stock listing. Unfortunately for FB and the exchange, the IPO appeared to be “snakebitten” from the very start – with trading delayed for hours on the morning of May 18th due to a massive electronic systems glitch. As a consequence, NASDAQ officials spent the ensuing months trying to wipe the proverbial “egg off their face”; in fact, 5/18/12 may still be the subject of nightmares for the CEO of the NASDAQ, Robert Greifeld. 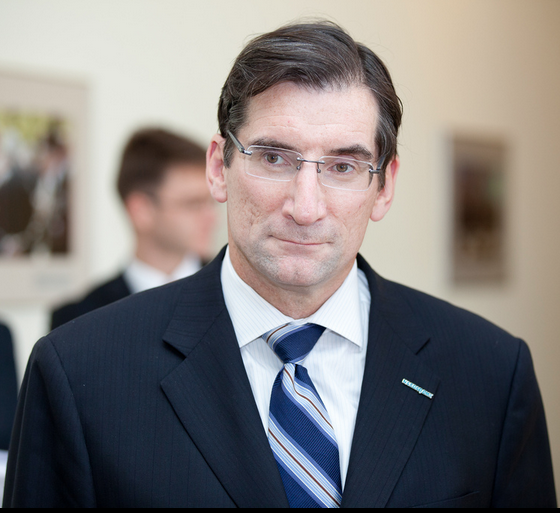 Mr. Robert Greifeld in the CEO of the NASDAQ Stock Exchange, which continues to compete with the NYSE for prime stock listings. Alibaba has not yet chosen the exchange for its IPO; but it is rumored that key Wall Street leaders are pushing for them to choose the NYSE, in order to avoid the snafus that have afflicted the NASDAQ.

Meanwhile, FB investors and management could only look on helplessly, as the stock price stumbled (see the stock chart below): 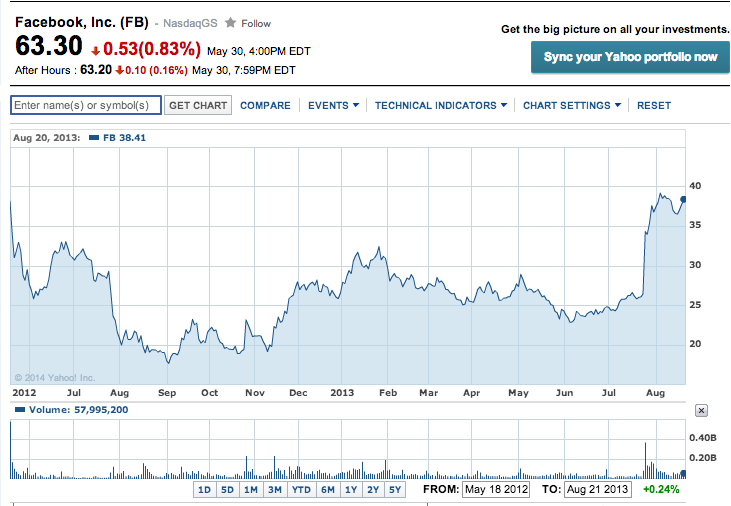 This price chart covers the first 17 months of trading in Facebook (FB).

Note that it wasn’t until the end of August of 2013 that FB moved above the IPO offering price of $38/share on a sustained basis (17 months after the IPO!).

The plain and simple truth is that tens of thousands of FB IPO buyers suffered for those 17 months with a stock that was “underwater” (a stock price below the IPO offering price) – leaving them with what many call “dead money”. Here is another look at the sad tale of FB stock following the IPO (from Wikipedia.com):

Here is a detailed listing of key prices and movements within FB through February of 2014.

The TWTR IPO was “tame”, in comparison, on all counts. There were no first day dramatics. The IPO offering price was $26/share, and the total raised from the IPO was a modest $1.82 billion. Leading up to IPO, Dr. Aswath Damodaran[1] offered detail from his own pre-IPO valuation of TWTR, opining that, at a $17.50 offering price, he would be “Neutral” on the stock; but at $26/share, the IPO would be more than halfway toward a price at which Damodaran would urge investors: “don’t buy”. 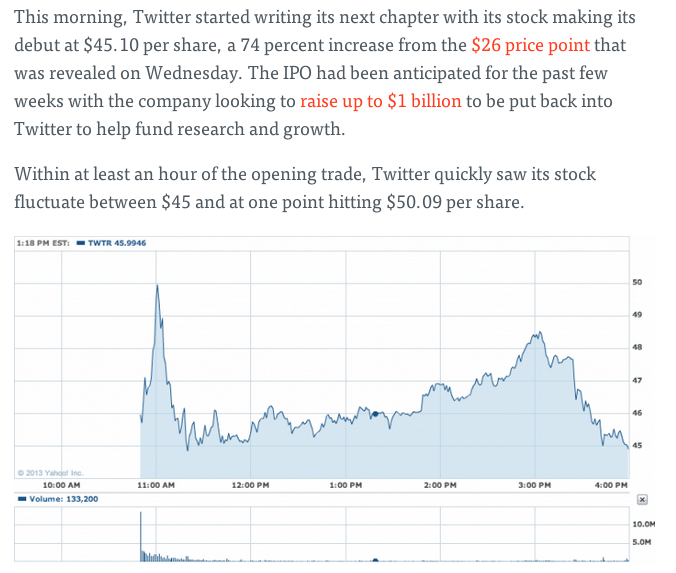 This is a very helpful summary of the first day of trading in Twitter (TWTR).

You can see that trading volume was heavy (113 million), so there were countless buyers who were willing to buy based on “hope for stupendous future growth” rather than based upon reasoned calculations of value.  Note that the first day’s trade was transacted in the mid $40/share range!

How did first day TWTR buyers fare during the following weeks? 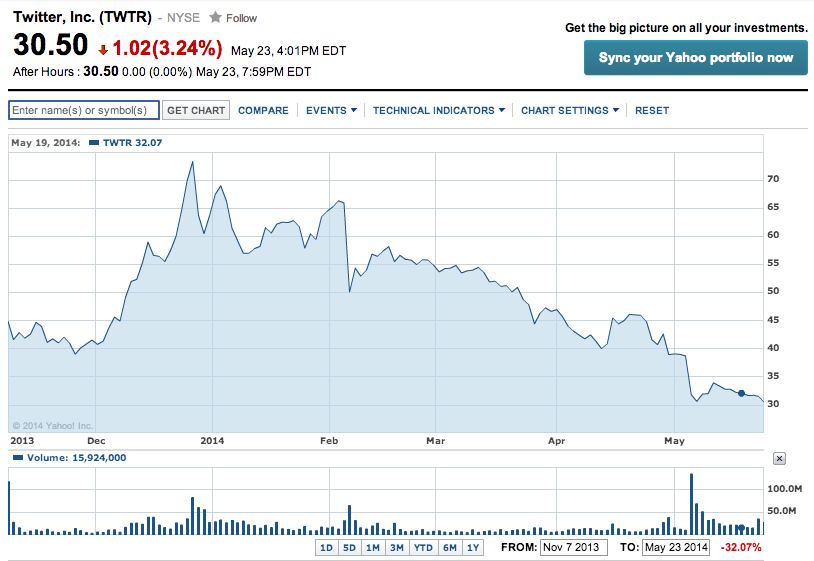 Here is a graph of TWTR stock prices through May of 2014.

If those buyers sold on the day after Christmas (December 26, 2013) they made out like bandits – garnering a return of almost 63% in less than 8 weeks (based on a $45 purchase price and a $73.31 sale price). However, if they decided to hang on for all of that hoped for “stupendous future growth”, they would now be sitting on an unrealized loss of almost 28% (based on the end of May price:  $32.44/share).

With regard to JD.com (JD), “the jury is still out”, since its IPO took place on May 22nd… just over one week before the end of May. 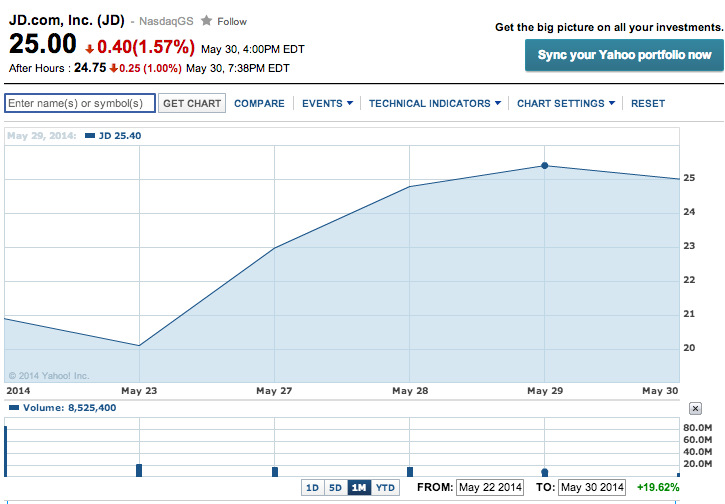 Here is the price graph from the first few days of trading in JD.com

However, as you can see in the graph above, based on the offering price of $19/share, the IPO has clearly received a warm reception by investors. Just (please) keep in mind those steep ups and downs we saw earlier within the stocks of FB and TWTR!

If we have to draw a lesson for investors from these IPO stories, what lesson could we agree upon? The possibilities are interesting. For example, how about this “lesson”:

1) “Beware participating in an IPO, because it can be treacherous!”  That would certainly be true of FB, but how about TWTR? That would depend upon whether an investor was an “IPO Scalper”[2], an intermediate term trader (who could have sold at over $70/share), or a “buy and hold” investor. It is that third type of investor who would be suffering right now.  And of course, it is way too early to make a judgment about JD!

2) A second possible lesson is: “Don’t get involved in an IPO unless you are heart healthy and do well with roller coasters!”  There is no question that trading an IPO stock will test your blood pressure, your nerves, and your patience. Volatility comes with the territory of an IPO, since the dynamics surrounding an IPO are the very epitome and essence of “price discovery”!  Don’t ever participate in an IPO unless you fully expect to experience some whipsaw and lots of movement!

That second lesson might be one upon which we can all agree… however, I want to propose just one more lesson… a lesson with which I can’t imagine anyone disagreeing! Here it is:

3) “The only ‘sure thing’ in an IPO is that the underwriters will rake in millions of dollars in fees and commissions!”   Just consider these little vignettes of underwriter profits:

a) Despite what a disaster the FB IPO proved to be, Morgan Stanley (MS), Goldman Sachs (GS), JP Morgan Chase (JPM), and 30 other (smaller) firms split $176 million in fees!  And that came at a greatly reduced fee rate of just 1.1% [fee reduction is a strategy underwriters use on some big, highly visible IPOs in order to spur additional future business].

b) For the much smaller TWTR IPO, the fee charged was 3.25%… netting a total in fees of over $59 million. Although quite a few underwriters were involved in that effort, we can identify what the “big three” took in of that $59 million:

c) For the JD.com IPO, It has been reported that Bank of America/Merrill Lynch (BAC) and UBS AG (UBS)  were the underwriters, netting a 4% IPO fee. That means that those two giant banks split a nifty $72 million in fees!

My objective in putting this article together was to provide our readers a convenient way to review three quite different IPOs from the past two years.  If you participated in one or more of these IPO events, I imagine that you can recall fairly clearly how you felt along the way. If you scored a big profit – congratulations!  If you were left holding FB during the long 17-month period of being “underwater”, you have my empathy.  And if you are still holding TWTR, I’ll keep my fingers crossed for you!

It goes without saying that Wall Street does not make a point of presenting this type of down-to-earth, realistic narrative regarding the positives and negatives, ups and downs of the Initial Public Offering (IPO).

I hope that, through this article, each of our readers were able to gain a helpful new perspective on the IPO phenomenon, and learned some new details about what really drives the IPO process (from announcement of an IPO through to the days just after the IPO date). At the risk of sounding utterly (and hopelessly) cynical, what drives the IPO process is not “investor enlightenment”. Instead, it is an orgasm of full-court, pedal-to-the-medal “marketing” by the IPO underwriters, as well as their Wall Street colleagues.

In addition, the financial press becomes energized by any IPO that has an eye-popping, attention getting “Story” – whatever that story might be.[3]  We all remember how inundated we all felt by Facebook stories during the months leading up to May 18th![4]  The same “inundation” took place prior to the Twitter IPO.  I suspect that much the same will grace our TV screens, business journals, financial magazines, and Internet business news feeds. The reason is simple: all of these investment news “players” want their share of increased ratings, higher circulation metrics, and elevated advertising revenue that comes along whenever there is a “Story Stock” that captures the imagination and interest of investors.[5]

What results is the plain and simple fact that a lot of financially related concerns rush to the “feeding trough” that is the IPO of an appealing “Story Stock”! So while we can quantify the financial reward that accrues to IPO underwriters (as I have earlier), they are not the only ones who benefit from the barrage of story telling that takes place during the long IPO process. Remember, the process is about marketing… not investor enlightenment!

Finally, as I am certain you have come to understand, participating within an IPO event is not (in any way, shape or form) for the faint of heart. IPO’s involve “buy side” stock promotion at its most extreme[6], and the volatility involved is a whole lot more interesting when you are positioned on the correct side of the trade than if the stock moves sharply against you! (Just ask someone who bought Facebook (FB) on May 18, 2012!)

To borrow the opening tagline from the old (old) dramatic U.S. TV series, Hill Street Blues: “Be careful out there!”

DISCLOSURE: I do not own JD.com stock, nor do I own Alibaba or TCEHY. I have not purchased anything through Taobao.com, TMall.com, or any of JD’s or TCEHY’s e-commerce sites. Nothing in this article is intended as a recommendation to buy or sell anything. Always consult with your financial advisor regarding changes in your portfolio – either subtractions or additions.

[1] Dr. Damodaran is a professor within the Stern School of Business (at New York University). He teaches corporate finance and valuation. He is the author of at least nine books in that field.  He is widely recognized (and respected) as a skilled and insightful authority on corporate valuation. I consider Damodaran “objective” because he comes from academia, specializes in the field, and appears to not be “in the pocket” of any wire house brokerage.

[2] That is… jump into the stock on IPO day and then sell when your profit target is reached, no matter what!

[3] Such as “started in a garage and grew to capture a market” (such as Steve Jobs), or a “can’t miss new technology”, or a “dominant player in an exponentially growing market” (such as Alibaba).

[5] Sadly, some so-called experts have their hands out for “kick backs” if/when they tout an impending IPO.

[6] And sometimes, its most obscene!