It was a beautiful, sunny spring afternoon. I was driving up to Minnesota to pick up my college son for summer break. It was one of those moments when you feel that “all’s right with the world.” Being lulled into complacency is a good thing on afternoons like that!

Suddenly, on my radio, CNBC commentators, sounding stressed and a bit panic stricken, start announcing a sudden, startling, and tumultuous tumble in stock prices – not just one stock or one category, but the entire market! During the minutes that followed, confusion reigned. No one knew exactly what had happened – only the obvious result (prices falling off a cliff). As is their wont, however, in the midst of confusion, CNBC commentators are skilled in speculating as to “why” (or as I put it – they make it all up).

Yes, the day was May 6, 2010 – between 2:45 PM and 3:00 PM (EDT). Ever since that day, that slice of time has been referred to as the “Flash Crash”.  It is disturbing that almost three years later, notwithstanding an official report from the CFTC and SEC and a number of academic and industry studies, we still do not know with absolute certainty what caused those dramatic moments within that slim 15 minute slice of time.

Why do I bring this up now, with the stock market hovering at or around all-time (nominal) highs? I do it for two reasons:

1)    Phase I of a two phase systemic plan to contain the ill effects of excessive, out of control volatility, is scheduled to commence on April 8th, just weeks from now. It is a plan mandated by the SEC almost a year ago and implemented by the Financial Industry Regulatory Authority (FINRA). As is typical with programs emanating from a bureaucracy, the program name is a bit cryptic: “Regulation NMS Plan to Address Extraordinary Market Volatility”.  The plan imposes requirements upon FINRA member firms and “trading centers” to calculate bands of “normal price” for a given stock or index and institute automated systems for the “pausing” of trades in said issue(s) when price moves outside that range.

I find it fittingly ironic that the SEC and FINRA have identified this plan with a shorthand acronym of “LULD” – for “Limit up-Limit down”.  The cause of the irony is based upon the phonetics of the acronym… which I take to be “LULLED”.  The skeptical side of me suspects that FINRA and the SEC would feel the program is a success if it lulls investors into feeling “safer” investing in the markets!

2)    Should we feel “safer”? That is a very subjective question. As I trade, I am struck by the occasional long, overly extended “wick” that suddenly forms on a price candle and then just as suddenly fades – indicative to me of some aberrant activity in the stock. These are frequent enough to keep one conscious of the powerful influence of big institutional buy and sell programs, as well as the impact of “non-executable orders” (orders outside the bid/offer spread) – a prime tool utilized by High Frequency Traders (HFT)  to test market price and gain trading leverage. (This activity is often referred to as “quote stuffing”.)

For those who (like me), here is a great illustration of the impact of HFT and “quote stuffing” provided through the ongoing market data and research firm, Nanex: 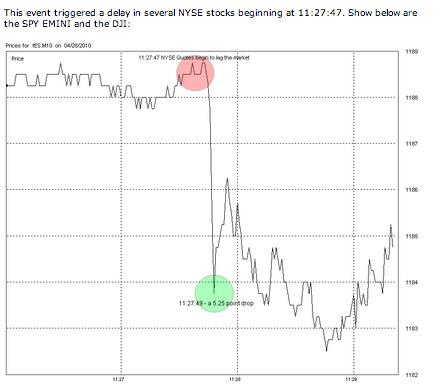 This graph depicts the SPY EMINI price action at 11:27:47 on April 28, 2010, just days prior to the now infamous “Flash Crash” on May 6th. In a sense, these few seconds on 4/28 were a precursor to (and might have served as a warning of) the tremors felt through Wall Street six trading days later! This price gap is what one could call a “cliff”.

As one would expect, a similar, but not quite as steep, cliff appeared simultaneously in the Dow Index: 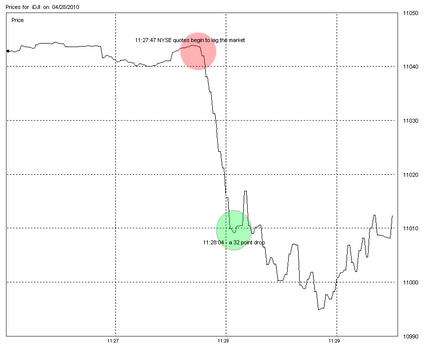 In the next installment of this look back at the “Flash Crash” and a “heads up” to you regarding the impending initiation of Phase I of the FINRA program with the long name that I prefer to refer to as the “LULD” Plan, I am going to remind you of several notable instances of aberrant stock price action that have occurred since May 6, 2010.   In addition, I will offer an over-simplified summary of what that program will involve.

Amazon Is Preparing for Coronavirus Troubles. Should Investors?