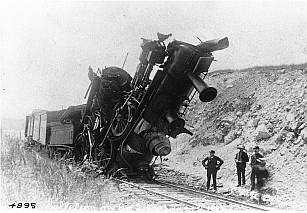 Train travel in the first half of the 1800's was relatively safe. There weren't that many miles of track laid yet, the trains didn't go very fast, and often a pilot engine would precede the train itself – the pilot engine would fall through the weak bridge or be the one to derail*.

But around 1853 the numbers of train accidents and people killed rose sharply. Why? As Robert C. Reed explains in Train Wrecks:

“One of the major causes of the change from safety to danger was cheap construction. American railroads were very cheaply built…”

“The Federal Government actually encouraged flimsy railroad construction through its land grant policy, which gave railroads land and loans only as mileage was completed. As a result the government put a premium on speed in construction and length of track, not quality…”

“Consequently, this cheap, hasty construction coupled with increased traffic and speed after 1852 produced a half century of frightful carnage.”

Compounding the problem was America's use of single tracks for both directions, the use of steel for rails didn't start until the late 1860's, and the lack of standard time (prior to 1883).

Right now, with gas prices near highs and natural resource and commodity production increasing, transport by train is growing. This weekend an AP news article focused on Warren Buffet's switch from insurance to railroads, utilities, and manufacturing.

I'm a short-term trader and this is a site for stock and options training. Why am I bringing up train stocks?

Short-term traders of course want quick hit-and-run trades on stocks like Google. But it is also good to have some trades that aim for either income or longer-term gains – diversifying the short-term portfolio not only in sectors, but in time and strategies as well.

I like to find ‘high probability' stocks – stocks that have a number of factors going for them, and generate income while holding them for longer moves. A favorite strategy of mine is the Diagonal Calendar, which is really a covered call using a LEAPS call instead of buying the stock.

Going through countless charts this weekend, I noticed multiple stocks in several sectors showing strength, many forming good setups for new up-swings. That may or may not happen, but with trading likely to pick up after Labor Day, and an upward bias this time of year in the overall market (once we get past September and early October), this may be a good time to consider these types of trades.

On the rail stocks I noticed they were either in trading ranges, like CSX and NSC, or solid longer-term up-moves, like UNP and KSU. Investor's Business Daily rates UNP very highly and in fact, they currently have it in their IBD Big Cap 20. I see evidence of institutional buying because during the rather steady upswing in UNP since 2009, there are occasional well-above average volume bars on up-close weeks: 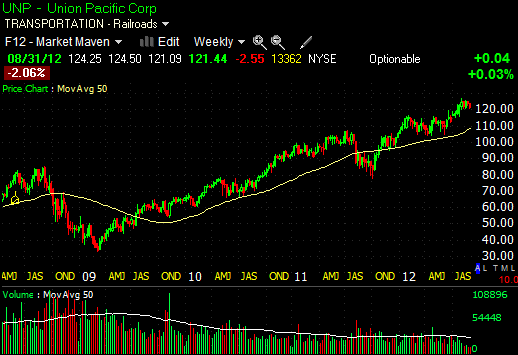 I check UNP's seasonal for confirmation there is an upward bias in the seasonal (the historical track record of UNP stock movement this time of year). It has a moderately strong track record of up-moves over the next six months, suggesting institutions regularly accumulate this stock.

I check their option prices. I see the Historical Volatility, and especially the Implied Volatility, are at lows. This suggests the options are probably reasonably priced. So I investigate a diagonal calendar – buying a longer-term in-the-money (ITM) call and selling a near term out-of-the-money (OTM) call for income. I'm looking to continue shorting OTM calls through the life of the ITM call. UNP has weekly options on it, which makes it more interesting. However the prices on the current Sept Week1 aren't high enough. I'll evaluate shorting a normal September expiration OTM call.

Typing the Friday closing call prices into my spreadsheet, I see that a

could produce a 20% return or more in 18 days, if UNP ends up above 125. This would be due to both the income from shorting the OTM call as well as a likely increase in the value of the OTM call due to the stock rising.

I would of course have to buy back the short call, or roll it ‘up-and-out' before expiration. In other words, this trade would have to be closely monitored and managed, as most trades should be. But by shorting more OTM calls in subsequent months I could capture a significant return over the next five months. Nothing is guaranteed of course, and that's why you need to know how to manage trades once in them.

By taking a chance on timing (that is, selling the OTM call some time after the purchase of the ITM call), the potential profit on the trade can possibly be increased. UNP has fallen back to its 50-day moving average: 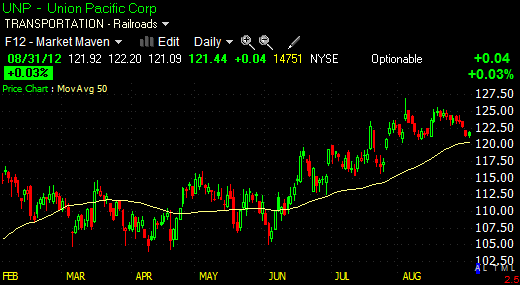 This is usually a good time to purchase the long-term ITM call for such a strategy. Ideally, the stock would resume its upward trend within a week or so. Then selling the OTM call at a higher price (and possibly even a higher strike) will create even larger possible profits.

This strategy worked incredibly well for me on gold mining stocks right after the 2008 crash. The mining stocks were among the first to recover. I was doing covered calls and diagonal calendars on NEM, GG, and AUY, and through timing and short-call roll-ups (buying back the call I had shorted early and selling another call at a higher strike and/or a further-out expiration month), I did quite well.

Aurora Cannabis Was the Hottest Big Marijuana Stock in May — but Will Its Sizzle Soon Fizzle?

Are Moderna’s Coronavirus Gains Over?