Trivia question: What current issue is able to link the current stock market (having finally broken through the old “nominal” high in both primary indices — the S&P 500 and the Dow Jones Industrials), elementary economics, “Saturday Night Live”, and key liberal Democrats and conservative Republicans?

I can hear you thinking – “Wait a minute, nothing unites liberal Democrats and conservative Republicans except an unswerving focus upon re-election.”  But the truth is that the issue of “Too Big to Fail” is currently causing serious waves in Washington D.C.!  On Tuesday, April 9th, Senator Bernie Sanders (Independent – VT) and Rep. Brad Sherman (D- CA) introduced a bill titled “The Too Big to Fail, Too Big to Exist Act”. Perhaps more significantly, Senators Sherrod Brown (D-OH) and David Vitter (R – LA) officially unveiled legislation today that is intended to press for simplified capital ratio calculations and higher mandatory standards for common equity.  Their expectation is that, when passed, their bill will either result in some bank spin-offs, or (at worst) big banks with much stronger financial underpinnings.

1)    It was the over-leveraging of financial institutions (particularly Lehman Brothers and AIG) that brought the U.S. financial system to the brink of collapse in the fall of 2008.  The impact of this systemic crisis was an economic tsunami whose waves so shocked and shook the U.S. and the world that we are still suffering from the “aftershocks”.  Needless to say, within that environment, the S&P 500 Index tumbled 46% in the seven months following Lehman Brothers’ fall (and almost 60% below the 2007 high).

2)    In the months that followed, bank failures and near failures (precipitated by overleveraged balance sheets and non-existent risk control management) were so abundant and persistent that it felt as though the banks were engaged in a game of falling dominoes.

3)    During that seminal fall of 2008, an October episode of SNL offered up a telling lampoon of the takeover of “World Savings” by Wachovia Bank (which later had to be rescued by Wells Fargo). The skit portrayed World Savings CEO, Marion Sandler, as saying: “My wife and I had a company which aggressively marketed subprime mortgages, and then bundled them as securities to sell to banks such as Wachovia. Today, our portfolio's worth almost nothing, though, at one point, it was worth close to $19 billion.”   (http://snltranscripts.jt.org/08/08dbailout.phtml)

That simplistic comedy bit provides an amazingly on-target summary the deathly danger to banks (and shareholders) when bank leaders harbor the illusion that some loans are “risk proof” and that maximizing profitability is the “holy grail” that will ensure their success. The hard lesson thrust upon the banking industry (and the nation) was that certain elementary economic laws are immutable – risk management can never be neglected and financial leverage can most definitely be a double-edged sword!

4)    During the past few years, it has felt as though liberal Democrats and conservative Republicans live in different universes, unable to agree upon essential facts, much less workable policies. However, there appears to be a growing consensus that the U.S. must do something to rein in the size, power, and potential risks inherent in banks that are “too big to fail”. Liberals have long held big banks under deep suspicion, and on an economic and ideological basis, many conservatives abhor the interference of government within the free enterprise system – including massive government bailouts of failed companies.  It is within the budding coalescence of these unlikely “bedfellows” that a non-binding resolution based on the principles promoted through the Brown/Vitter bill passed the U.S. Senate just weeks ago with unanimous support – a rarity these days!

So just how bad is our “big bank” problem? One of the startling revelations that emerged from the recent Cyprus bank crisis was the high ratio of the size of Cyprus bank assets to the country’s GDP – which at over 800% can be accurately described as either outrageous or obscene.  The size of U.S. bank assets relative to GDP is nowhere near that measure.  However, Cyprus did serve to illustrate the importance of monitoring bank size vis-à-vis national GDP, in order to ensure proper proportion, as well as contain undue financial risk.

To that end, consider these two graphs – the size of the six biggest U.S. financial firms relative to U.S. GDP in 2006 (left graph) compared with the same metric in 2012 (right graph; in each graph, total assets of the top six U.S. banks is shaded in blue while the full circle reflects the size of U.S. GDP). Do you see the difference between 2006 and 2012?  “Big banks” have become much bigger relative to GDP!

Over the weekend, I compiled a very non-comprehensive set of data on bank deposit size within ten major U.S. states (California, New York, Pennsylvania, Georgia, Massachusetts, Connecticut, Florida, Arizona, Illinois, and Michigan) based on data from http://www2.fdic.gov/.  I entered deposit data from the biggest 14 banks for 2000, 2003, 2006, 2007, 2008, 2009, 2010, 2011, and 2012.  I then graphed the changes in market share (within those regions) among the top five, three, and two banks over those years. The results were illuminating. 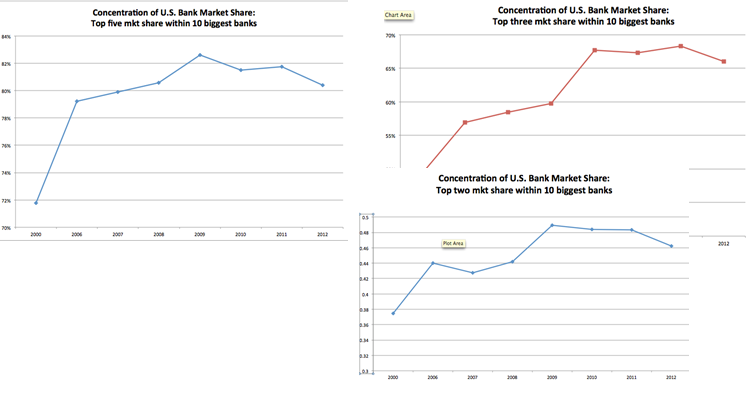 However, considerably more illuminating was the list of bank names that appeared within the “top ten” during one or more of those early years, and yet no longer exist, such as: LaSalle Bank, Bank One, Washington Mutual, Fleet National, First Union National, and (of course) World Savings and Wachovia. The biggest bank in 2000 was Bank of America – which at that time was a full 70% larger than Chase. In 2003, Wachovia “came out of nowhere” to move into the fifth spot, moving up to third by 2006! What a contrast to the configuration of banks today!

Viewed from the perspective of 2013, the decisions and policy actions of the U.S. government in 2008 (and afterward) constitute a paradox.  U.S. finance officials (those “in the know”) believed that they were on the brink of systemic collapse. Therefore, they faced a dilemma that was (in effect) really a “Hobson’s Choice”.  Right now, many of you are scratching your head thinking: “What? A dilemma that is really a Hobson’s Choice??  I’m lost!”

No problem! On the surface, it might appear that Henry Paulson (U.S. Treasury Secretary), Ben Bernanke (Federal Reserve Chair), and Tim Geithner (President of the New York Fed Bank) had a choice between 1) bailing out big finance firms about to fail, or 2) just letting the free markets play out and adjust to economic developments. That would be a “dilemma” (two alternative choices). However, in reality, not doing anything would have resulted in financial chaos and the potential collapse of multiple banks in the U.S., Europe, and Asia – an economic calamity that would inevitably do incalculable financial harm to an unacceptably large number of innocent depositors and investors around the world. No politician or government leader is prepared to take responsibility for that. Therefore, in their own minds, they were given only one effective choice – just as Thomas Hobson’s customers were only provided one (effective) choice in 16th Century England.

Therefore, the paradox of U.S. financial policy in 2008 was this: confronted with the almost certain (and imminent) collapse of several “too big too fail” financial companies, the government grasped at the seemingly easiest solution – serve as a facilitator (through subsidies) to help already “big” banks (Chase, Wells Fargo, Bank of America) becoming “mega-banks”.

In this light, the newly re-energized political efforts in Congress to remedy the “big bank problem” is, in effect, an effort by the government to “get the Genie back in the bottle” that it “let loose” when it repealed the “Glass Steagall Act” (from the 1930’s) in 1999 and then served as the key force in creating “mega banks” in 2008!  It will be fascinating to watch how this ongoing economic and political drama plays out in the months and years ahead.

Why Oceaneering International Stock Rose as Much as 10% Today