Where do you think you’d have to go to witness this incredible feat of prestidigitation and legerdemain: suddenly, magically, mysteriously make $7 trillion disappear?

In order to help you answer the question, allow me to clarify a bit. The $7 trillion does not really go away; it is still there, huge as ever. The key thing is that it has been made “invisible” to any and all of those whose wellbeing might depend upon actually seeing it!

OK. I sense that you are puzzled.  After all, $7 trillion is a humongous amount of money. How can it be hidden?

Our suspicions naturally jump to Washington, D.C., which specializes in playing games with numbers. (Case in point: Obamacare was approved under the premise that it could cost $1 billion to implement; now the Congressional Budget Office reports that the figure will be somewhere between $5-10 billion!)  Congress regularly plays games with their budget numbers — games so egregiously deceptive and illogical that even the infamous Chicago mobster, Al Capone, might have been ashamed to approve them himself! Congress “hides” billions of dollars all the time – all without a blink of the eye or a tear of remorse. But we all have to admit that $7 trillion is far beyond even Congress’ legendary skills!

No, friends! Congress is not where you go to witness the disappearance of $7 trillion!  For a feat like that, we must turn to those who specialize in high stakes money games: big U.S. banks!!

The vice chairman of the U.S. Federal Deposit Insurance Corporation, Thomas Hoenig, reported in a mid-February interview that U.S. banks are twice as big as they admit to being!  This image was so stark that the Bloomberg News reporter who chronicled the interview likened Hoenig’s statement to the message that appears in the subtle warning on automobile side-view mirrors: “Objects are bigger than they appear”! 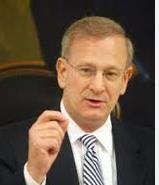 IMAGE: The photo to the left is Thomas Hoenig, former President of the Kansas City Fed Bank and current vice chairman of the FDIC!

In fact, Hoenig’s concerns about banks are so strong that it sounds as though he thinks a warning label should be placed on each bank building and stock report: “this bank is bigger than it appears!” Of course, I would add: “… and may be hazardous to your financial health”.

The cause of the current misleading impression about U.S. bank size is U.S. accounting standards. Those standards allow banks to record a smaller portion of their derivatives[1] than European banks are required to report; in addition, the U.S. standards allow banks to keep most mortgage-linked bonds off their books. The absence of these items from U.S. bank financial reports therefore offers a misleading impression regarding bank financial risk. As Hoenig warns: “Derivatives, like loans, carry risk. To recognize those bets on the balance sheet would give a better picture of the risk exposures that are there.”

So where does the $7 trillion figure enter into this story? If U.S. banks were forced to comply with international accounting standards for derivatives and the consolidation of mortgage securities, third quarter data points show that JP Morgan Chase (JPM), Bank of America (BAC), and Wells Fargo (WFC) would double in asset size, while Citigroup (C) would leap 60%!

Instead, because these U.S. banks “get a pass” from the international standards, U.S. rules allow them to erase approximately $4 trillion in derivative related assets and about $3 trillion in mortgages packaged into securities – hence $7 trillion in total!

There are several significant implications related to Hoenig’s revelations. If U.S. banks were required to comply with international standards:

1)    JPM, BAC, and C would become the world’s three largest banks. WFC would be the 6th largest.

Why is this revelation from Mr. Hoenig important to you and to the country?  If you’ll think back to the period between 2005 and 2008, the overleveraging of U.S. financial institutions was pandemic. “Easy money” was being made in real estate and mortgages and derivatives – and each bank wanted (more than) their “share”. Pressure was brought to bear on mortgage and derivative sales forces to sell more and more and more. There was such a sense of momentum and success that bank executives lost their focus on two essential “basics” of banking: risk assessment and risk control.

The result (as we know) was economic disaster. When mortgages started going sour, resulting in property values falling, aggravated by more mortgages going into delinquency, causing more property values falling… a tragic, snowballing cycle downward was triggered. Money started getting tighter as banks struggled with growing financial pressures. By September of 2008, the cycle moved out of control and became more like an avalanche. Two developments from those days are Illustrative of that avalanche: 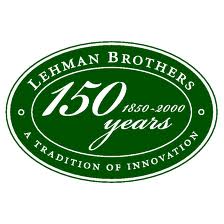 1) Lehman Brothers’ CEO Richard Fuld let the company move its leverage ratio steeply upward, from 24:1 in 2003 to 31:1 by 2007. That meant that Lehman was a profit monster early on, but soon became overextended. Increased leverage meant that a decline in the value of Lehman assets of a mere 3-4%resulted in the complete wipeout of Lehman’s equity. Making matters ever so much worse, Fuld had authorized hiding as many of Lehman’s problem balance sheet items as possible through accounting gimmicks. Lehman could be a “poster child” of the tragic consequences of leverage and dysfunctional, deceptive accounting.IMAGE: The Logo to the left is that of Lehman Brothers. One reason it will never celebrate a 200th year is that it “innovated” in hiding key problem assets from investors and analysts!2)    A second case in point is American International Group, Inc. (AIG), which had been (by far) the primary insurer of mortgage securities and related derivatives, resulting in this accelerating avalanche hitting it with so many oversized obligations that it tottered on the edge of failure — until the U.S. Treasury rescued it with a $182 billion bailout. So here we have another “poster child” that illustrates the daunting risks of which Thomas Hoenig has warned us!

IMAGE: the image below illustrates the risky nature of AIG’s business… risks that we only fully appreciated after it nearly collapsed!  (Credit: http://www.mcclatchydc.com/2009/03/18/64275/aig-chief-tells-congress-we-had.html#.UZBanuCbppY)

Perhaps you are thinking: “Why haven’t we moved the U.S. bank accounting standards to match the international standards?… After all, that is absolutely the only way that institutional and individual investors can make informed decisions about the relative value of U.S. banks and foreign banks!”

If you thought that, I salute you!

Unfortunately, those in charge of bank standards and regulation must be graduates from the same school of “effective leadership and policy-making” that trained the current members of our U.S. Congress. Over a decade ago, members of the U.S. Financial Accounting Standards Board and the International Accounting Standards Board pledged to bring these bookkeeping systems into conformity. It took them four years to start meeting. And now, despite six years worth of talks and negotiations, they remain as divided as ever.

Following the financial crisis and feeling pressure to do something, the U.S. accounting board agreed that banks should mark all loans and debt securities to market values (not just the ones held short-term). That sounds like great progress, since it reflects sound, transparent accounting and improves effective risk management! However, after a brief period, the board abandoned the policy. The reason: intense lobbying against the policy by U.S. banks!  Not too long thereafter, the U.S. accounting board came very near to adopting Europe’s approach regarding accounting for derivatives.  That was another very encouraging sign of transparent and responsible accounting. Alas, once again the board abandoned this change due to rabid lobbying by bank leaders.

Allow me to illustrate the truth of what I have suggested, as well as the reason the banks are fighting so hard to control (manipulate) the process: 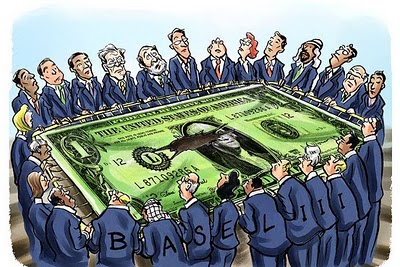 2)    During the past two decades, U.S. banks have complied with a “U.S. version” of that ratio – which requires U.S. lenders to have capital equal to 4% of total assets (as determined by U.S. accounting standards.

3)    Before you breathe a sigh of relief, consider this. If these banks were required to be measured by international standards, the result would be:

4)    Obviously, if the U.S. were to adopt international standards, they would be required to transform their accounting standards and significantly shore up their capital risk ratio by raising more capital (diluting their per share stock values).

5)    The U.S. banks parry criticism leveled at their capital risk levels and overall risk management by making unsubstantiated assertions such as this – that their much improved control mechanisms for loans initiated by them and then turned over to Fannie Mae and Freddie Mac (to be incorporated into mortgage bonds) renders totally unnecessary any need for them to set aside reserves for potential repurchases.

6)    As an invaluable counterpoint, the president of Accounting Policy Plus (a consulting firm), Esther Mills observes: “There was clearly a failure by certain institutions to appropriately assess the liabilities before the crisis. Are there enough liabilities going forward for the billions of mortgages being transferred?”  If anyone questions Esther’s credentials, she is a former accounting executive from both Morgan Stanley (MS) and Merrill Lynch (now part of BAC)– so she “knows that of which she speaks”! 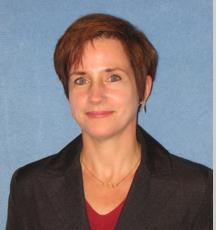 IMAGE: The photo to the left is Esther Mills, president of Accounting Policy Plus (credit: http://accountingpolicyplus.com/)

No one knows how this will all play out. For that, we will just have to wait and hope (and perhaps pray). We definitely know that Thomas Hoenig, whose access to all the “inside data” available to the FDIC (the very entity responsible for insuring bank deposits), is extremely concerned about the risks banks are carrying. Making the situation considerably worse, Hoenig knows that our banks are twice as big as they appear – because they’ve been given full permission to make $7 trillion totally invisible to all of us who “need to know”.

It will be a travesty if Hoenig’s warnings are ignored and then, years later, become validated through some new banking crisis. If that happens, perhaps we need to replace toothless accounting boards with an “enlightened dictator” immune to lobbying pressure from banks. Then we would get the fully transparent, appropriate, and effective accounting and risk control standards we need and deserve!

[1] Financial contracts whose value depends upon the variable value of stocks, bonds, currencies or other securities; two parties agree to swap cash or collateral at the end of a pre-determined period.

Looking for Yield? These 5 Top Stocks Pay More Than 5%.