There are some people who can't give you a simple explanation to save their life. You just glanced over at your bookcase, didn't you, so you know what I mean.

Over the years I've looked for the simplest ways to filter trade possibilities, aiming to increase the likelihood of success of the trades I do make.

For example, I don't like to make bearish or short bets when the overall market is due to set a short-term cycle low. I've updated and shown the S&P 500 chart several times over the past year. Here is the chart I had in the August 23rd newsletter, suggesting that a cycle low was due in the S&P (the low did occur 4 trading days later):

Cycle analysis of this sort doesn't predict exactly when the low will be, or even if one will definitely occur within the near future. But over time, it averages out to be a good way to increase your chances of success by going with only bullish trades when a likely short-term cycle low has just formed, and going with only bearish trades when the market is likely due for a low within the next couple of weeks.

I say ‘it depends'. On a rising stock, index, or ETF, I usually focus on the pivot-point lows to identify the start/end of cycles. When the chart is going through a longer downtrend, I find the pivot-point highs more accurate for identifying cycles.

The other question I try to answer is ‘how far will this move likely go?', and here is where I will try to make it simple.

The S&P 500 formed a cycle low eight trading days ago. It was more or less on schedule from the late August cycle low. In general, I don't want to enter new bullish trades if the overall market (or the individual stock I'm evaluating for a trade) is due to roll over, that is, due to set a short-term cycle high and then head towards a cycle low.

There are two ways to look for an answer to this question. One is based on time. If the S&P (or individual stock you are looking at) averages about 6-7 calendar weeks per cycle, and it's been about 2-3 weeks since the last cycle low, then the market may be due to form a high followed by a pullback leading to the next cycle low (cycle highs are seldom centered between cycle lows – they tend to be close to the cycle end on up-trends and closer to the cycle start on down-trends, but this is not an exact science).

The other way is to analyze distance. Again, not an exact science, but it doesn't have to be. I was looking at the S&P 500 chart. I made sure it was in Logarithmic' scale mode. I won't go into the reason why here other than to say it makes this technique slightly more accurate. You can Google ‘why use logarithmic scale for stocks' if you are curious to learn more. But to be truthful, this is a very rough, simple technique for getting a feel for how much more of a move may be coming in a stock, and it works well enough in Arithmetic chart mode as well as Logarithmic mode.

I noticed that the 6 most recent up-moves off a cycle low, for the S&P, moved approximately the same distance on my chart screen. I grabbed a 3×5 index card to use as a simple ruler. I noted that the late November 2012 through late December move covered two ‘lines' on the 3×5 card: 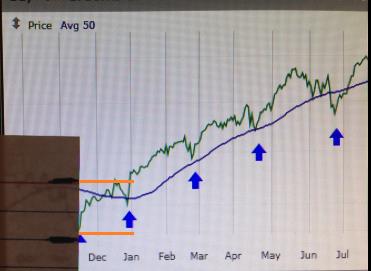 I measured the next period, the late December 2012 through late February 2013, and found roughly 2 lines of movement again: 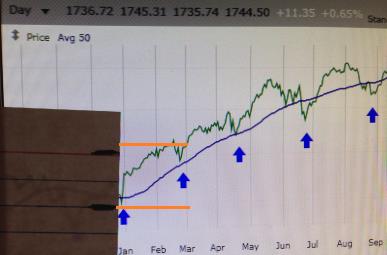 I went through the next 3 cycles and found they too gained about ‘2 lines of a 3×5 card' on each up-swing.

My ultimate goal was to evaluate the recent upswing. Using my 3×5 card, I see it has traversed about two-thirds of a ‘2-line' move. Of course there is no guarantee this move will be similar to previous moves, and therefore will stop around the ‘2-line' point. But because of the human nature factor and the psychology of crowds, market swings can often be regular and rhythmic. 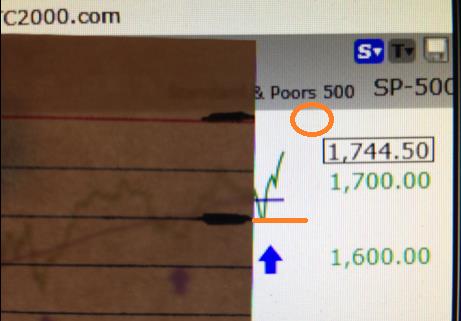 With the S&P 500 having already moved about two-thirds of other recent moves, I feel the probabilities of further success with bullish trades have diminished for the near future. I can, and will be looking for individual stocks that are just coming off cycle lows or the bottom of trading ranges. After all, this current upswing can go quite a ways – it doesn't have to stop around the ‘2-line' point. But the odds of a significant further up-moves in stocks that already have logged most of their typical moves has fallen. The odds of an overall market pullback are increasing. I don't like to trade against the odds.

Why Shares of Editas Medicine Dropped 15.5% in November

Why Lucid Stock Is Falling Today