In Part I, we reported on the huge swing downward in the market’s interest in and support of gold prices so far in 2013. Gold-based ETFs have seen the biggest outflows of funds in their history, and the swings in the price of gold have been head-turning.  A look at the chart of SPDR Gold Shares (GLD) since the start of the year is telling: 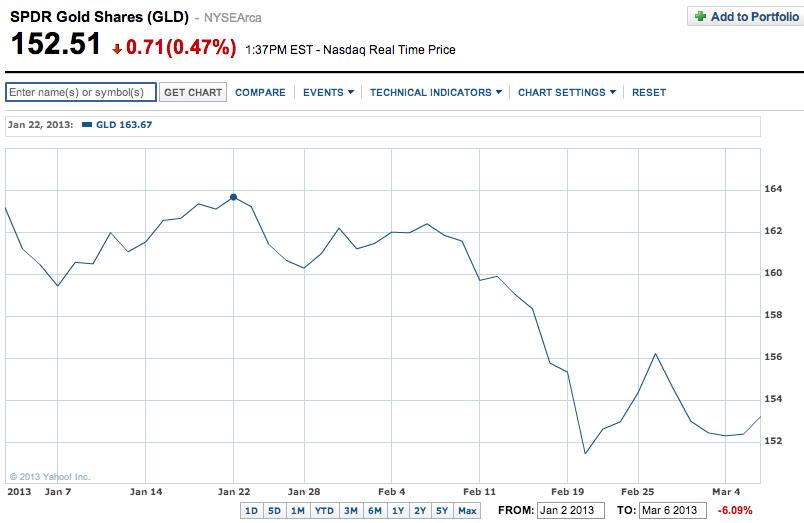 Graph by Thomas R. Petty, C.F.P., based on data from YahooFinance.com

In Part I we offered a “simple” explanation regarding the downward price of gold – namely, it has moved “out of favor” unlike at anytime since 2008. In this part, we will offer a bit more complex view regarding the trend of gold prices.

The longer-term view: in sharp counterpoint to all of the above, it is worthwhile to note that, as big institutions and countless investors give up on gold, powerful countervailing forces are at still at work. There continues to be growing recognition by world experts that the dollar has become problematic (see the International Monetary Fund 2011 review of the dollar as a reserve currency: http://money.cnn.com/2011/02/10/markets/dollar/index.htm ), especially since the Federal Reserve’s balance sheet has ballooned beyond recognition, subjecting the dollar to accelerating inflationary declines. For a stark picture of the magnitude of the Fed’s “easy money” policy, take a look at this graph: 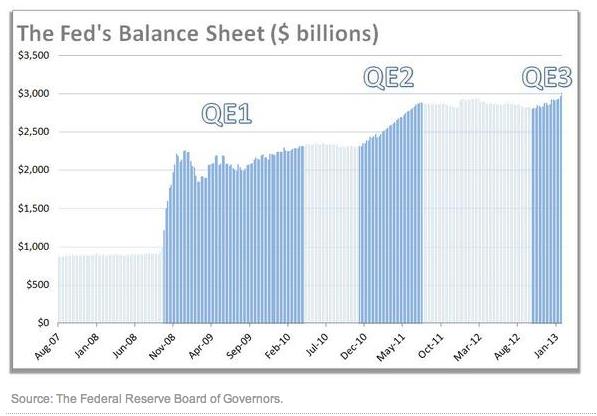 GRAPH of the U.S. Federal Reserve Balance Sheet. It has tripled since November of 2008.

Indicative of the transformative power of this Fed easing, combined with European Central Bank easing (to rescue the chaotic state of European economies), is the uncharacteristic decision this year by Japan to “open up the monetary spigots” on the Yen, if only to maintain the competitiveness of Japanese exporters. The world is becoming, quite literally, “awash” with paper currency.  During his “Humphrey-Hawkins” testimony in late February, Fed Chair, Ben Bernanke, was tactful (if evasive) in responding to a charge that the Fed is engaging in “currency wars” – devaluing the U.S. Dollar in order to increase exports and reduce the cost of high U.S. debt: “This is not a beggar-thy-neighbor policy; it’s something that stimulates our trading partners!”

Pardon me for my skepticism! No matter what the “intent” of Fed easing might be, the compelling effect of QE has been to make U.S. exports cheaper and to lower U.S. federal borrowing costs!  More importantly, countless expert economists point to the annals of history with regard to the inevitable result of currency debasement: “inflation”, perhaps even out-of-control inflation.  Apropos to inflation, almost everyone agrees that gold has historically been an inflation hedge, since (unlike paper money) there is a relatively fixed limit to the supply of gold.

In this light, Frank Holmes (CEO and CIO of U.S. Global Investors) commented on a finding by Macquarie Research recently.  Macquarie reports that the current correlation between the Fed’s balance sheet and the price of gold is markedly high – sitting at 0.93.  Holmes wrote:

“The firm found that for every $300 billion expansion in the balance sheet of the U.S. government, there was a $100 an ounce increase in the price of gold. When you factor in the Fed’s current bond purchases totaling $85 billion per month for the next nine months, the central bank will be adding $765 billion in new assets…By this measure alone, gold would rise approximately 16% over the next several months.”

My personal perspective is that central bankers, despite public statements to the contrary, recognize the pernicious effects of super-easy monetary policy. That is as good an explanation as any for the steady accumulation of gold by numerous governments. For example, Russia and Kazakhstan increased their gold reserves each month between October 2012 and January 2013 (per data from the IMF). Azerbaijan purchased gold bullion for the first time in over three years; South Korea lifted its gold reserves by 24%; and China continues to grow its gold reserves, in large part because its incredibly huge $3.2 trillion in foreign reserves is only 1.7% in gold (compared to an international average of 10%). Overall, the World Gold Council reports that central banks raised their gold purchases by 17% during 2012 – the most since 1964; and the Council believes that this trend will continue in 2013.

Obviously, neither I nor anyone else can, with utter confidence, predict the price of gold. Currently, we see a raging battle in progress between gold “bulls” and “bears”. It is obvious that “investor” appetite for gold has, to put it mildly, “cooled” considerably.  I suspect the short to intermediate term price of gold will continue to vacillate back and forth for quite some time (much to my frustration). However, any sizable negative economic event in the coming weeks or months could rather quickly reverse the downward trend.

It is the longer-term view that seems clear to me. With regard to the future price trend of gold, if I was forced to choose between the wisdom of Goldman Sachs or that of the world’s central bankers, I feel secure in committing myself to follow those with the best view of the “big picture”.  Needless to say, I will not be following the advice of Goldman Sachs. Instead, to paraphrase the words of “Deep Throat” from Watergate fame, I will “follow the money” of central bankers!

DISCLOSURE: I am long GLD, SLW, GDXJ, and IAG. However, the short-term trends have humbled me and convinced me to significantly pare back my holdings.