Anyone who, like me, is a long-term precious metals bull has been a great candidate for a sales pitch touting the clinical tests of an incredible new pain relieving pill. The fakes, feints, and foibles of gold prices during the past few months have been head-spinning. In fact, the regular clash between bulls and bears in the gold market was particularly vivid during February. For example, look at this chart of SPDR Gold Shares (GLD) prices between February 6 and February 20: (Graph by Thomas R. Petty, C.F.P., based on data from YahooFinance.com)

On Monday, February 25, Wall Street powerhouse Goldman Sachs released a highly publicized report that declared the death of the twelve year bull run the commodity has enjoyed – cutting its three-month forecast for gold from $1,825/oz all the way down to $1,615, with a twelve-month target of $1,550. Goldman based its forecast reversal upon its opinion regarding an improving U.S. economy and excerpts from the minutes of the prior month’s Federal Reserve Board meeting – within which several members voiced a preference for the slowing down of the Fed’s current $85 billion per month bond buying “Quantitative Easing” (QE) program. The Goldman report noted that a number of big league gold investors (including George Soros and Louis Moore Bacon) have significantly reduced gold holdings, and it warned: “Our economists believe that the downside risks to their forecasts have diminished while the uncertainty about the size of QE3 is high. We believe that a shift has occurred over the past few months with conviction in holding gold waning quickly.”  Those who, like me, view Goldman Sachs with suspicion, could opine that Goldman was a little late with their “call”, since GLD had already fallen 7.4% from its January high of $163.67. Only time will tell whether or not their call is “on target”.

However, on the day after the Goldman report was released, an increasingly outspoken Fed Chairman, Ben Bernanke, defended monetary easing in no uncertain terms while presenting his annual “Humphrey Hawkins” report to the U.S. Senate Banking Committee. Bernanke emphasized the still fragile state of the U.S. economy and the importance of fostering employment growth. Answering a question about the seemingly counteracting impact of an expansionary monetary policy and a “contracting” fiscal policy (Fiscal Cliff; Sequester; etc.), Bernanke replied: “I just think that to some extent, the fiscal decisions being made are mismatched with the timing of the problem.” Commenting on stock market performance, Bernanke offered his view that “stock prices don’t appear overvalued”. Further, he sees only limited risk of an equity “bubble” because earnings are high. (Note that the Dow is trading at about 13.8 times earnings, vis-a-vis 17.1 at the 2007 peak and 25.9 in January of 2000.) With all due respect to the Fed Chair, I offer the warning that “high earnings” may well not offer adequate risk reduction for many, given the unique set of economic variables we currently face. Illustrating this very point, while Bernanke was testifying, the world was absorbing news from Italy that its voters had elevated an “anti-austerity” coalition to power – pointing toward the likelihood of continuing European financial easing (to compensate for out-of-control spending).

Finally, in what may have been Bernanke’s most disingenuous statement, when asked if he was a monetary “dove” or “hawk”, he replied that in some respects, he was a “dove”, but his record on inflation is “the best of any Federal Reserve chairman in the post war period”.  No matter what your level of esteem might be for the Fed Chair, the bottom-line impact of his testimony was a sharp rise in the price of gold! Here is a graph of GLD’s price chart between February 20 and February 26: 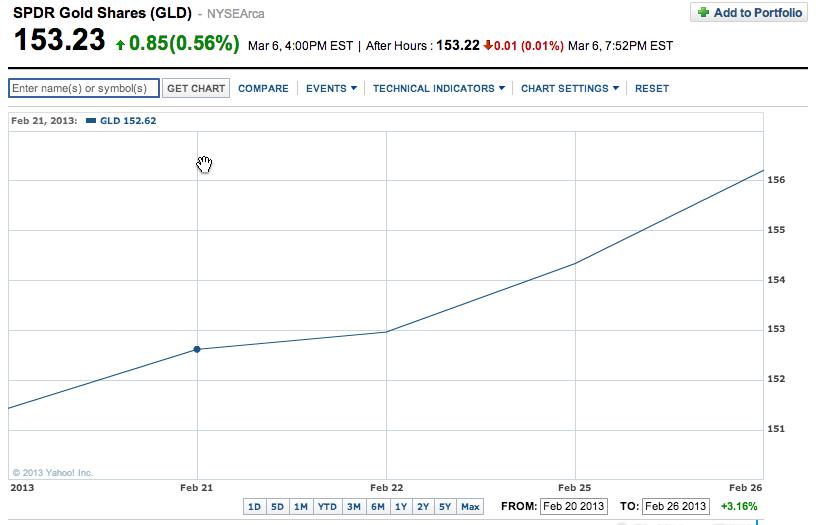 Graph by Thomas R. Petty, C.F.P., based on data from YahooFinance.com)

So what is going on with gold?  I suggest that the answer is both simple and very complex. The simple answer:  within some of the best-known investment circles, gold has simply lost favor.  Statistical reports show that the net level of institutional investments in long-term gold at the Comex is at the lowest level since December of 2008.  A March 1st report from Barclays PLC indicates that gold ETF’s were on the verge of recording their weakest month on record.  A later report from IndexUniverse reports that investors have pulled $5.4 billion from SPDR Gold Shares (GLD) since January, powering GLD’s price downward by almost 6% during February. Redemptions from other gold ETFs have been heavy, as well. To that very point, Jason Kephart of Investment News offered this eye-opening data: “A record $4.1 billion was pulled from gold ETFs in February, the largest single month of net outflows for the group ever. It’s almost twice the previous high — $2.6 billion in January 2011!” http://www.investmentnews.com/article/20130305/BLOG03/130309963#

We will pick up with the more complex explanation regarding gold price trends in Part II.

DISCLOSURE: I am long GLD, SLW, GDXJ, and IAG. However, the short-term trends have humbled me and convinced me to significantly pare back my holdings