This image below shows the INTEL DH61AG “Apple Glen” Motherboard. It is just one example of past Intel innovation.  Back in 2009-10, home theater machines struggled to overcome issues like poor integrated graphics performance, power consumption, thermals, noise and size. Thanks to Intel, most of those issues were addressed by January 2010, through the release of a new processor codenamed “Clarkdale.”  Based on a 32nm process, they were the first modern CPUs to incorporate an on-die GPU — that Intel called the “Intel Graphics Media Accelerator HD”. (Image licensed by Aleutia, through Creative Commons (on flickr.com)). 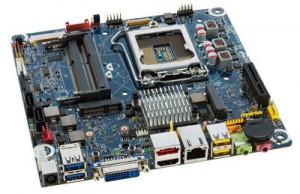 One of the biggest investment stories through the second half of 2012 was a steep decline in the perennial semi-conductor powerhouse, Intel (INTC).  From its May 2nd high of $29.18 through the end of the year (12/31/12), the stock declined over 29%.  The full-year performance was a much less disappointing 16%.  In contrast, the largest semiconductor ETF, Market Vectors Semiconductor ETF (SMH), gained 4.8% on the year; while during the final six months, as INTC got crushed, SMH only lost 7.4%.

What accounted for this huge discrepancy between the performance of the segment’s traditional leader, INTC, and the semiconductor space as a whole? Two simple words: 1) smartphone, and 2) tablets.  Here are is a telling view of the dramatic growth of smartphone sales in the U.K: 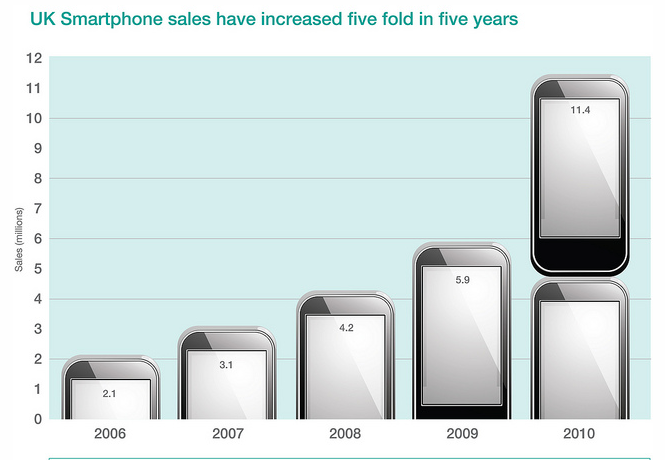 In the “smartphone sales” chart, we can examine the explosive growth in that market, as well as the operating system “market share” of each year’s sales: 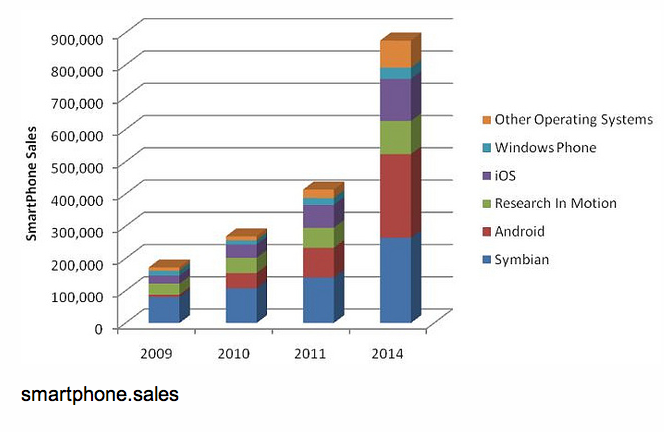 In the “KPCB Mobile Subscription Growth” Chart, we see that even though the U.S. experienced 28% growth in this quarter, there was exponentially greater growth in India, China, Turkey, and Brazil) 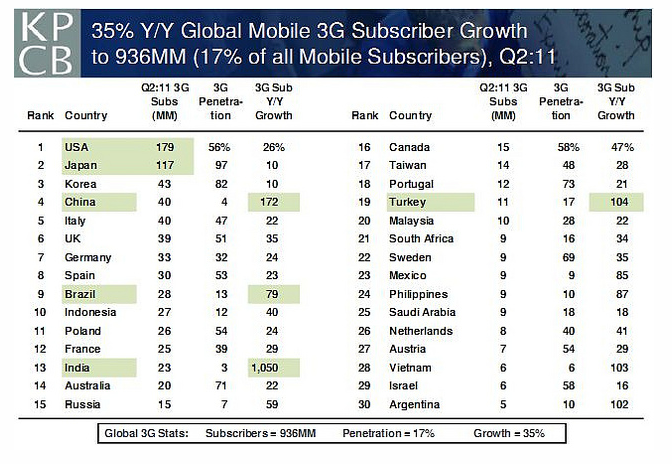 The “saturation” level within the smartphone market will not be reached for some years yet, as the graph below demonstrates. 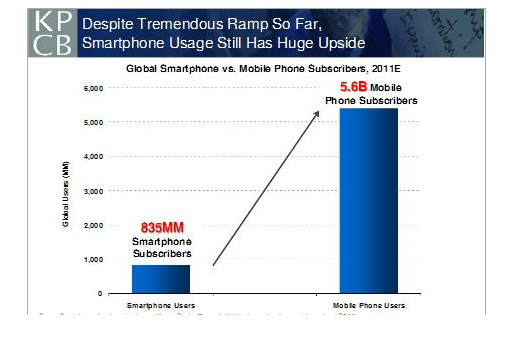 The fundamental “case” against buying INTC stock has been that INTC is, by its own admission, far behind the curve in the chip market for tablets and smartphones – which requires a significantly different chip for optimal power and performance, compared with the standard chips used within the standard desktop and laptop PC.  So the fundamental issue with INTC is that, despite its reputation as the premier manufacturer of quality PC chips (millions of people can instantly recall the two key parts of INTC’s longtime promotional campaign – the “Intel inside” logo and the distinctive three notes that accompany it in commercials), INTC has fallen behind in the “mobile chip” market (for tablets and smartphones).

INTC’s dominance in the PC market has served it well during the era when PC’s provided the primary   access to the internet and efficient computer applications. However, the PC era is fading, while tablets and smartphones are on a steep upward ascent. This “technology transition” was symbolized powerfully during 2012 when Oracle Systems (ORCL) (a prime provider of parts for smartphones and tablets) surpassed INTC in stock market capitalization.  The chart below (Courtesy of YCharts.com) shows that this telling transition took place in June of 2012: 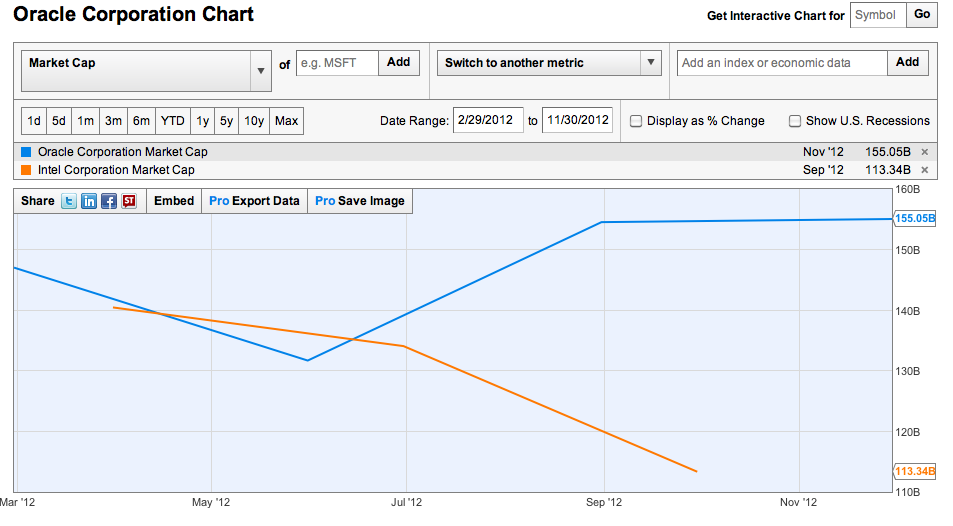 Along much the same lines, the stock performance of ORCL during 2012 (up approximately 30%) contrasted dramatically with INTC’s 16%: (Courtesy of YCharts.com) 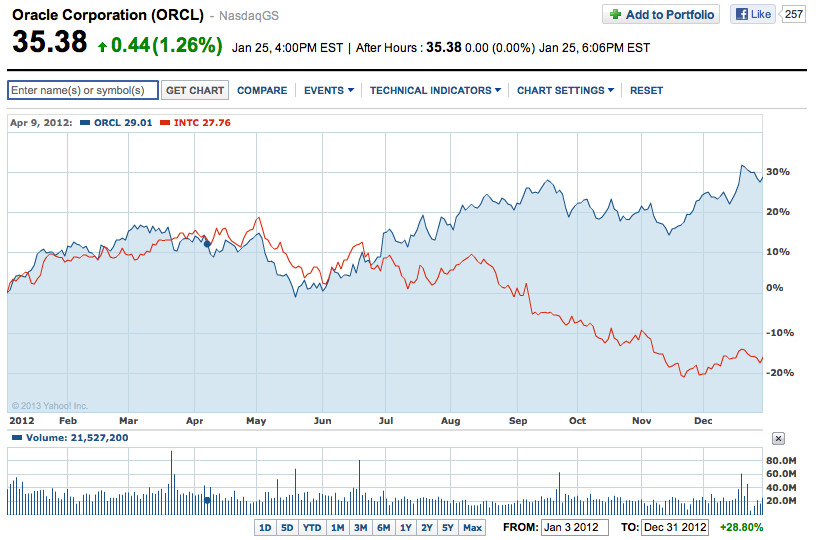 Therefore, as stock analysts and commentators offered their analyses of INTC during the past six months, two different views emerged: 1) INTC stock has lost its “mojo”; its PC/laptop business is fading quickly; it is too far behind the competition on smartphones/tablets; there are better places for your investable dollars; and 2) INTC is a superb, financially solid company with a proven record of succeeding during periods of technological transition and with unmatched R&D resources; its 4.3% yield will help you profit as you wait for it to ramp up for the “mobile platform” market.

I always find it fascinating when any particular commentator presents her/his opinion about INTC as though there is no alternative opinion that makes sense. The truth is that each investor has a unique “risk/reward” profile.  For those who want a “growth” stock, INTC is not the optimum choice.  However, for conservative investors who appreciate financial strength and a demonstrated history of excellence within a very cyclical industry, INTC could be a great choice.

Let me briefly summarize my own understanding of the underlying points that buttress each view:

It is obvious from the above why “growth oriented” investors and managers are negative on INTC equity.

a) INTC admits they have had a disappointing year and are in the process of “catching up” on the chips demanded by the mobile market.  However, within the very cyclical semiconductor market, INTC has experience recovering from lower cycles.  Here is a chart of INTC Q Revenue Growth YOY (Chart courtesy of YCharts.com) 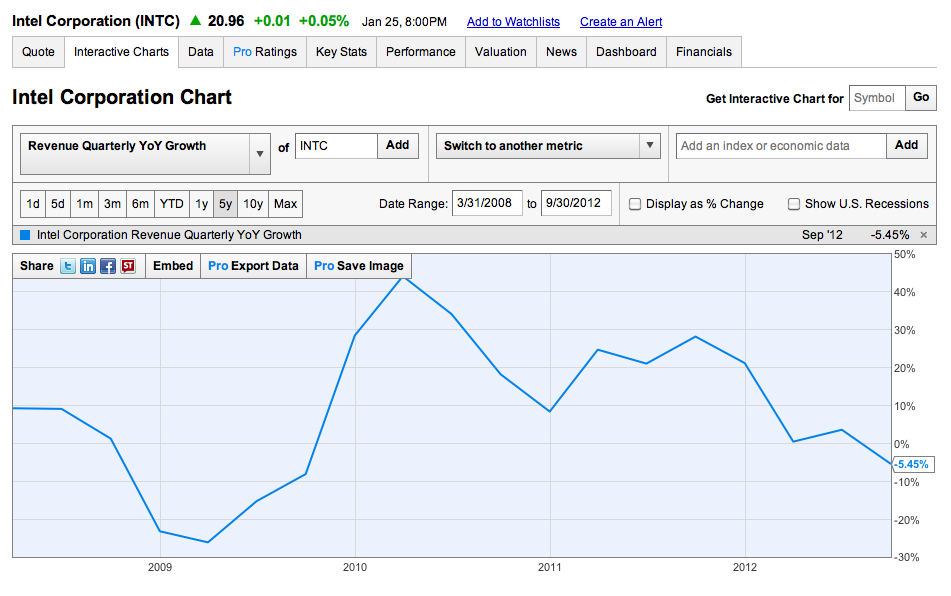 And here is a chart of INTC Net Income: Trailing 12 Months (Chart courtesy of YCharts.com) 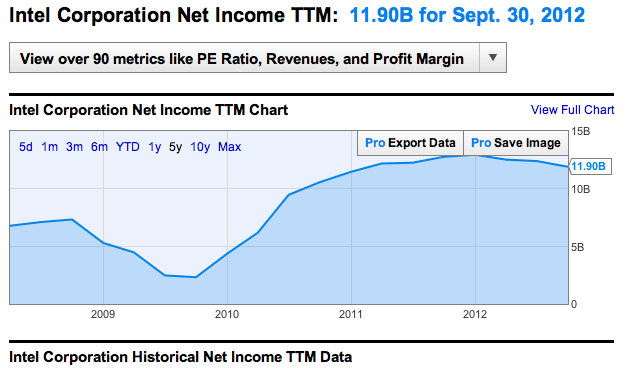 I readily grant that the 2008-10 cycle was primarily the result of the “great recession”. However, this pattern of cycles has been typical of semiconductors as they move from cycle to cycle.

b) INTC has consistently proven its exceptional prowess at developing newer, faster chips with strong competitive advantages. As you know, in accord with “Moore’s Law”, the number of integrated circuits on a chip doubles every two years.  That is a challenging rate with which to keep pace; but INTC has managed to keep pace for decades. The transition in size/power currently in play is from 28 nanometer (nm) “upward” to 20 nm and 14 nm. However, the market expected a much higher performance jump in the 20nm chips than it delivered. Therefore, the current focus is on the 14 nm chip that offers battery power improvements between 40-60% when compared to the 28 nm chips. This is the very reason that INTC liquidated old inventory and is jacking up its capital spending budget… both integral parts of its plan to “move to the head of the class” in the newest chips. It is worth remembering that INTC has been “counted out” during prior tech cycles, and in each instance has successfully sprung back to its tradition of excellence.

c) INTC has a strong PC Client Service segment that continues to grow, with expectations of increased server business, especially in China. 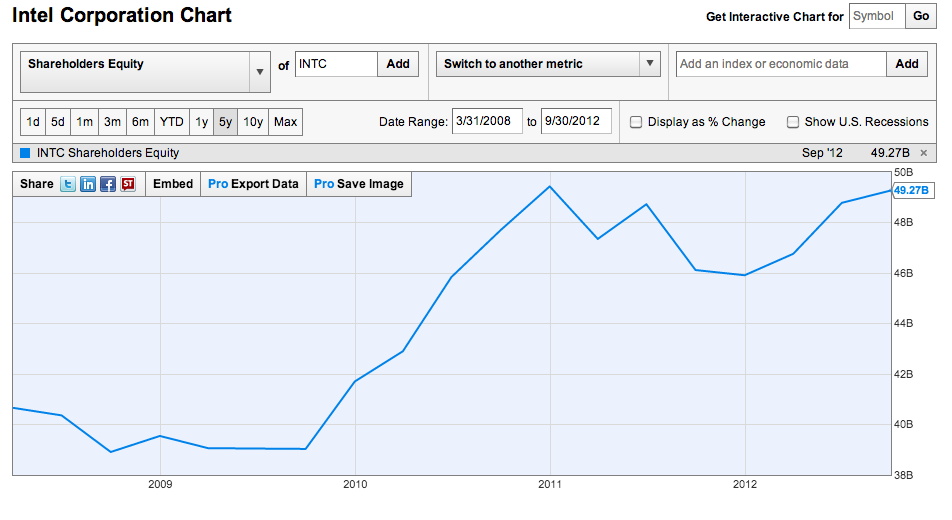 d) INTC continues to grow its smartphone chip business. More impressively, it will introduce its “Haswell” product in the next five months, with the largest generation-to-generation battery life improvement in

e) INTC is solid financially and has been very shareholder-friendly – combining a great yield with systematic share buybacks. This chart illustrates the result – rising shareholder equity (Chart courtesy of YCharts.com).

f) INTC is no slouch in generating revenue – drawing in almost $1 billion/month through most of 2012.

g) INTC intends to keep growing and prospering. In fact, it just received permission to open a new $4 billion plant in County Kildare, Ireland, from which it will design the next generation of 14 nanometer processors. A little “luck of the Irish” won’t hurt them, either.

h) It remains very profitable, as reflected in these “Return on Equity” “Earnings Yield”, and PEG Ratio charts (Charts courtesy of YChart.com) 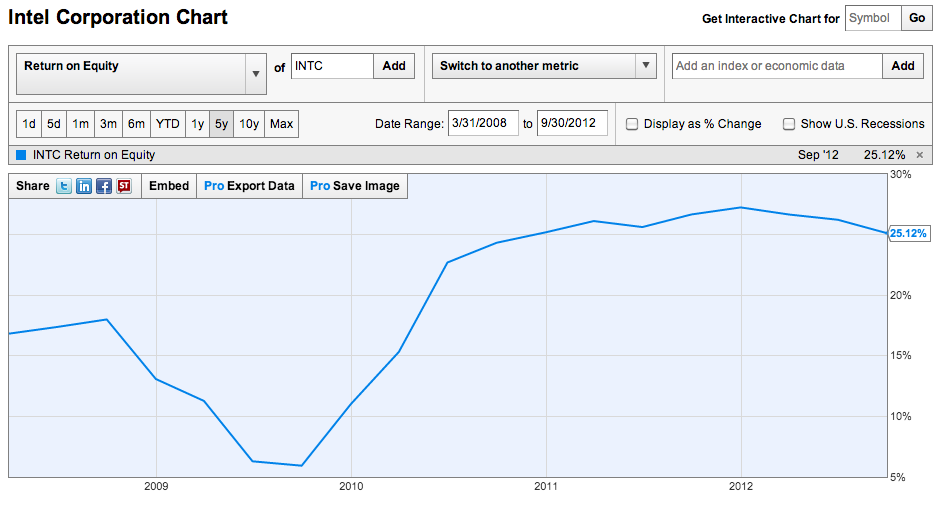 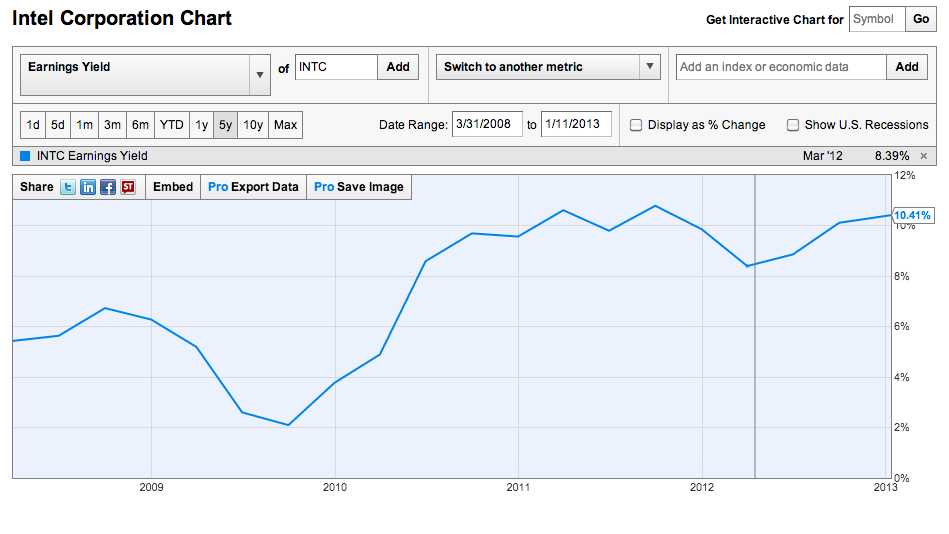 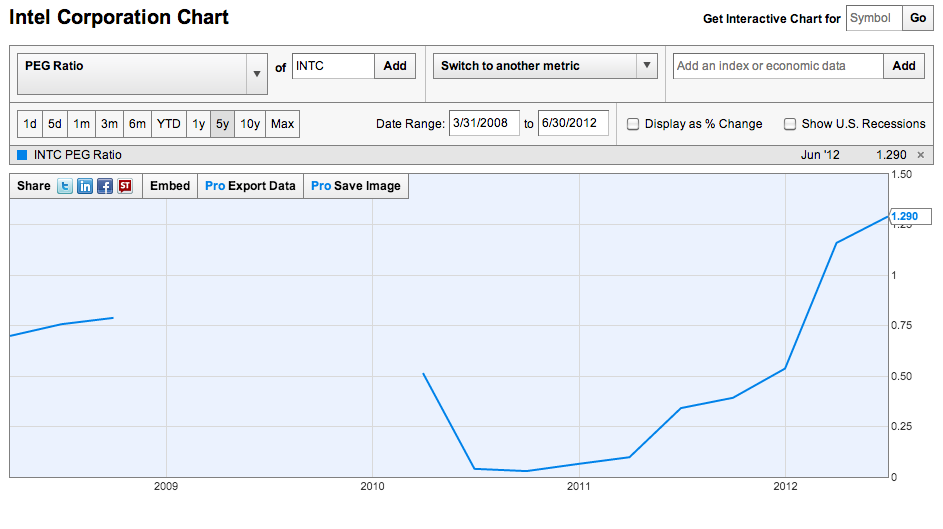 h) If everything goes INTC’s way in 2013, here are Alphonso’s “best case scenario” figures, compared with 2012:

The above is truly a “rosy picture” view; but in the unlikely event that everything goes perfectly, it would be an impressive year.

i)  Finally, for those who value socially conscious corporate actions, earlier this month (January 10th) INTC released a groundbreaking report on “Women and the Web”, developed in cooperation with the U.S. State Department’s Office of Global Women’s Issues. The report offers eye-dropping data demonstrating an egregious Internet Gender Gap around the world. It calls for coordinated action to double the number of women/girls who have online access within developing countries from the current 600 million to 1.2 billion during the next three years!  http://newsroom.intel.com/community/intel_newsroom/blog/2013/01/10/intel-announces-groundbreaking-women-and-the-web-report-with-un-women-and-state-department

There you have it – an attempt to offer a concise summary of most of the arguments in favor of buying, holding, or selling INTC. My personal opinion is that all of these points have validity. Therefore, the crux of the decision regarding the merits of INTC hinges upon each investor’s financial goals and priorities.

Why fuboTV? Because Cord-Cutting Assumptions Are All Wrong

Can the Pfizer and Moderna Vaccines Beat the New Coronavirus Strains?