In Part I, we began a review of the market performance of SPDR Gold Shares (GLD) during the past 14 years. We did this because of the extraordinary bull market in GLD during a twelve-year period that culminated in a peak (closing price) on August 22, 2011 of $184.59, which was followed by a prolonged period of price decline into late June of 2013.

Since June, we have moved upward by about 14.4% (through August 16th). Therefore, millions of eyes hunt for the price of GLD each day – all with the same thought: “Will this uptrend continue, or will GLD fail to keep stair stepping upward (and instead fall backward to new lows)?”

For your convenience and review, here is a “big picture” graph – with the GLD in blue and the S&P 500 Index (^GSPC) in red. 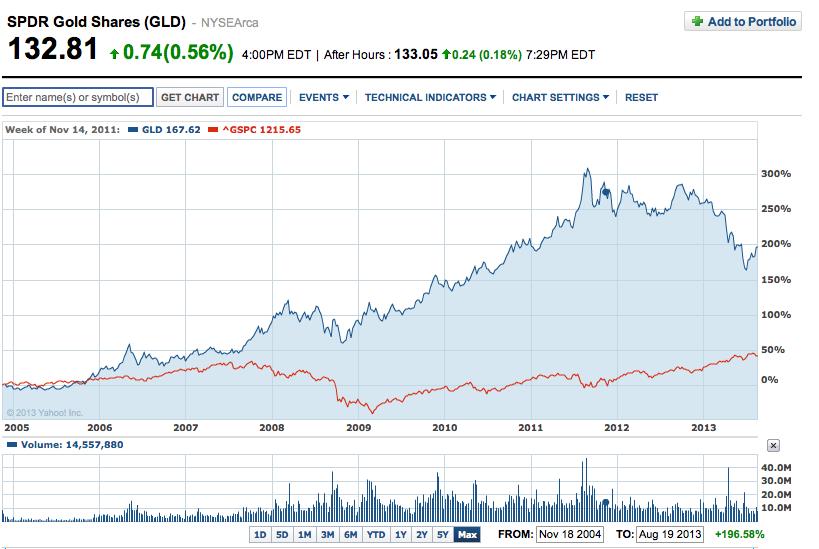 If you haven’t already digested Part I, I strongly encourage you to take a few minutes now to find it and move through it. We provided quite a few “knowledge nuggets” regarding where the price of gold has been, and what trends/developments have been impacting GLD since 2011.

Today, I want to review two interesting theories regarding current and future gold prices, pose a relative “valuation” question, and then highlight just a few of the features that have, throughout recorded history, lent gold a unique and timeless place within the economic ecology of women and men!

First, let’s take a look at two recently reported “takes” on gold. The first emanates from a firm in Schaumburg, Illinois (an “edge city” northwest of Chicago, and just 15 minutes from me). The name of the firm is Asbury Research, and it is likely that you have never heard of it. That is because Asbury’s primary client base is composed of hedge funds and other professional investors.[1]  Asbury studies countless technical indicators to inform them of the primary investment trends and insights that Asbury then shares with clients.

Recently, one of the most intriguing and compelling of those technical indicators springs from the economic behavior of commercial enterprises whose business activities involve (in one form or another) gold. Because the price of gold has an ongoing and significant impact upon these companies’ pricing, profit margin, revenues, and earnings, these firms have made “hedging” the price of gold an integral part of their monthly activity. Let me hasten to emphasize that, in sharp contrast with big banks and investment firms[2] involved in the “proprietary trading” of gold, these commercial enterprises do not intend to make their hedging a “profit center”.  All they intend to do is to manage the risk they bear whenever the price of gold experiences sharp (especially sudden) changes. They endeavor to “smooth out” the level of risk inherent within their business activities.

What Asbury has recently discovered is that these “commercial hedgers” were (during their most recent reporting period) net short 19,041 gold contracts. Of course, to you and me, that number sounds like a lot of contracts – but without any “benchmark” through which to measure “large” versus “small”, that figure, on its own, means nothing. However, when we learn (as Asbury informs us) that 19,041 contracts is a figure so very low that Asbury had to search all the way back to January of 2002 to find a comparably small data point.  That, of course, was when gold was just beginning its long and protracted journey upward (more than quadrupling its price between then and 2011!).

As you can guess, the gold price narrative that accompanied Asbury’s recent report to clients went as follows: “These commercials, a.k.a. the ‘smart money,’ are collectively the least bearish (read most bullish) on gold prices that they have been since January 2002!”

A word of caution: Asbury is not omniscient; no one should rely only on that single insight to inform any trade (of any kind) in gold (GLD). However, when combined with a series of other trends/data points/insights, it may prove helpful to us as we try to discern the future of GLD.

Moving on to a second hypothesis, allow me to confess that I am not yet a big fan of the market professional who has publically shared these views on gold (GLD). However, he does present us with impressive credentials! Axel Merk is founder and president of Merk Investments LLC, as well as the author of the book: Sustainable Wealth[3].

More significantly, back in 2005, Merk’s track record demonstrates that he positioned clients to move out of real estate, as well as out of the U.S. dollar – moving them into gold and “hard” currencies.  Then in 2007, he cautioned clients to expect an eventual surge in volatility, bringing with it an excruciating contraction in credit that would impact all asset classes.   I wish that I had been as insightful back then as he was.

In a recent “Merk Insight” newsletter, Merk indicated that the convergence of continued economic weakness, the dwindling growth levels in recent corporate earnings reports[4], and a dovish[5] Federal Reserve compel him (and by implication, should compel us) to hold gold in higher esteem than the investment markets have demonstrated between January 1st and late June.

However, Merk does have the capacity to find a “silver lining” in the recent (since August 2011) “dark cloud”. Merk appreciates the fact that the sharp selloff since August 2011 has quite successfully shaken innumerable “gold speculators” out of the market… thereby freeing the gold market (now in “purer” form) to resume its age-old role as a “monetary policeman”.

As reasoned and restrained interpreters of recent Federal Reserve speeches, meeting minutes, press conferences, etc. will confirm – “easy money” will be with us for an extended time to come. The only thing that might change sooner than we expected six months ago is the precise level of monthly asset purchases – which is something quite different and distinct from a historically low Fed Funds rate, which will continue indefinitely!

Given that fact, plus the extremely “easy money” policies of the prime minister in Japan and the continuing “open money spigot” provided through the ECB, the BOE, and the PBC,[6] that “police function” of gold should have cause to be active and diligent for months to come!  In Merk’s words: “As monetary policy appears on a more accommodative path than a couple of weeks ago when ‘exit’ and ‘taper’ talk was all the rage, [gold is] the ugly duckling that gets to shine.”

Somewhat like one might put seasoning on food to enhance the entire eating experience, Mark can even add a couple of “bonus” reasons to justify gold being at an inflection point:

1)    In agreement with the general tone of the Dallas Federal Reserve Chief’s (Richard Fisher) recent speech,[7] Merk points to one of many Washington D.C. policies which appears to be holding the U.S. economy back from more robust growth – particularly in job growth. The “Affordable Care Act” (aka “ObamaCare”), is prompting countless companies (big and small) to either reweight the balance of their full and part-time workforce (in favor of part-time) or to flat out drop certain benefit coverage (thereby skewing employment figures and worker well-being negatively). That will likely prolong the perceived need for “accommodative” monetary policy;
2)     Merk lives in San Francisco and notes (anecdotally) that the real estate boom in that area has not been accompanied by a construction boom, which is (in his mind) “suggesting the recovery is all financial.”
3)    Between the two primary “candidates” publically “floated” as the future Chair of the Federal Reserve – current Vice Chair, Janet Yellen, appears most the likely choice. Merk points out that she is even more “dovish” than Bernanke!

You have now read the two hypotheses I promised you. The additional thought I think you might find helpful as a way of weighing “relative value” is this:

Think back to November of 2010. That was the point during which the second round of Quantitative Easing (QE II) was announced.  During that period, what was the price of GLD?

It stood right about where it stands now!!

It happens that, at that point, the market was trading at a level fully 40% below where it trades now!!

Think about that.  In the big picture, given all that you know about monetary and economic developments, as well as reasonable valuation methodologies, which asset is currently priced at a level more appropriate for any prospective period of “tapering” (whenever that may begin)?

Finally, I know that many, many “technical analysis” trading professionals swear by the premise that “all you need to know about the market and trading can be found ‘in the charts’!” For folks such as those, it doesn’t much matter what is traded, or what the nature of the company or commodity traded might be.  However, I definitely don’t fall into that camp. I can not comfortably trade something of which I don’t have at least a “passing understanding”!

So for those of you who might be like me[8], here is a brief review of high school Chemistry class with respect to the characteristics that make gold unique (and valuable):[9]

INVESTOR TAKEAWAY: If during the past two years, you have experienced any of the figurative “whip lash” that has plagued my option trading within the precious metals space, this may (or may not) be an appropriate point for you to step back, take a lingering look at the charts and trends provided in Part I and Part II your review, and then consider what gold’s future might hold?  One of the many benefits of being related to Market Tamer is your access (through classes, webinars, using the site to ask questions, etc.) of lower risk strategies to help you design an effective investment approach toward gold (GLD).

Disclosure: The author is an established “sucker” for bullish positions in precious metals. He currently holds option positions in GLD and shares of iShares Gold Trust (IAU). Nothing in this article is intended as a recommendation to buy or sell anything. Always consult with your financial advisor regarding changes in your portfolio – either subtractions or additions. And in the words of an old TV Show named “Hill Street Blues”: “Be careful out there!”[13]

[1] These are the folks to whom I refer by the term “the big boys” (with all due apologies to our female readers; trust me, no male chauvinism is intended – especially since I have little regard for “the big boys”!
[2] All the usual suspects – but with special emphasis upon JP Morgan Chase (a big player), Goldman Sachs, Morgan Stanley, etc.
[3] The full title is: Sustainable Wealth: Achieve Financial Security in a Volatile World of Debt and Consumption
[4] and in particular, continuing failures to “meet or exceed” revenue expectations.
[5] Forget all the current hoopla about “tapering”. The Fed is still “dovish”.
[6] Acronyms for the central banks of Europe, England, and China.
[7] We wrote an article about that speech this past month.
[8] You have my sympathy!
[9] For more, see http://chemistry.about.com/od/gold/a/10-Gold-Facts.htm:
[10] Malleability is a measure of how easily a material can be hammered into thin sheets.
[11] 18 karat gold is 75% pure gold; 14 karat gold is 58.5% pure gold; 10 karat gold is 41.7% pure gold. Generally, the remaining content is silver, but various other metals are sometimes used.
[12] It is true that most metals can be dissolved, but if gold needs to be dissolved, a special blend of acids is necessary (aqua regia)
[13] Particularly when/if you trade GLD!
Be Sociable, Share!

Here is How You Can Buy Alphabet Stock for Under $2

3 Ways to Plan for a Market Crash

Could Inovio Pharmaceuticals Be a Millionaire-Maker Stock?