This article is going to be a departure from my “usual” style. It is going to focus upon a particular form of an “invisible” force that helps shape the financial markets each day. The force to which I refer is the human mind and heart, and the “form” is anxiety.

Anyone who has studied the investment world for enough years has become familiar with the importance of investor sentiment.  As one would expect, as the investor mindset shifts or investor expectations are disappointed – behavior in the financial markets can be quickly and radically shifted. One non-spectacular, but easily recognized example of this occurred on August 25-27, following the U.S. Secretary of State’s (John Kerry) public statement announcing a prospective 3-day attack on suspected bioweapon user, Syria. Although the military actions promised later became delayed[1]), the reaction within the markets was swift: a 2% downward move in stocks (blue and red lines below) and a nearly 3% move upward in the SPDR Gold Trust (GLD). 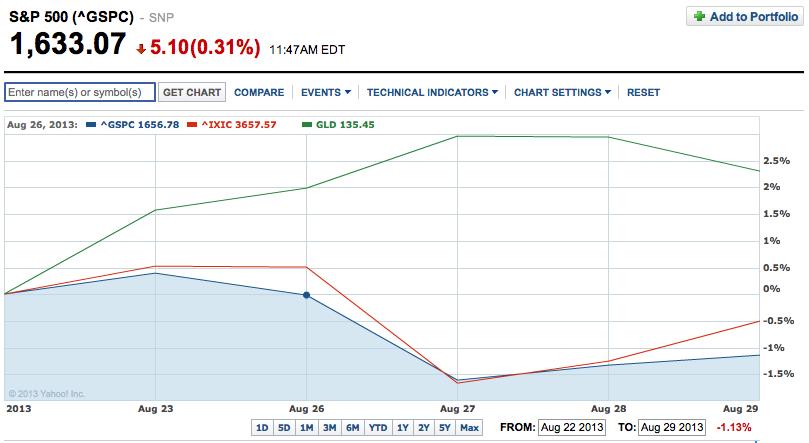 A longer-term example of swift shifts in sentiment can be seen following the May 22nd U.S. Federal Reserve Chairman’s ill-considered reference on May 22nd to a potential reduction in Fed asset purchases in the near future.

For visual reference, here is a chart (to the right) of the iShares Core Total US Bond Market ETF (AGG) between April 12, 2012 and March 8, 2013 – showing a relatively normal, balanced, range of trading in the ETF – starting and ending at about the same price level. 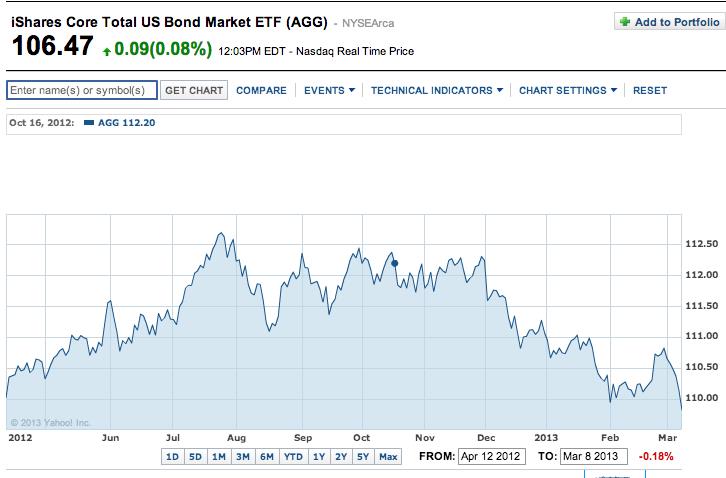 In contrast, this (see graph below) shows the price action stretching from just before Ben Bernanke’s May testimony through July 5th (the drop was not quite “like a rock”; but it was severe): 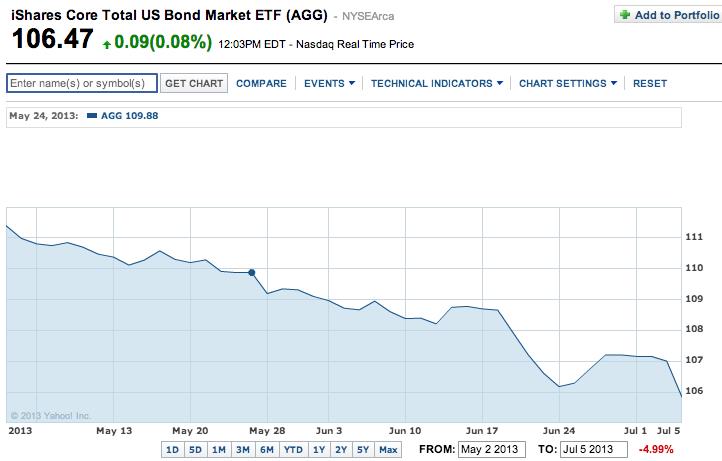 Following July 5th, the fall continued. The next graph (below) illustrates the remainder of the drop between May 2 and August 22, 2013: 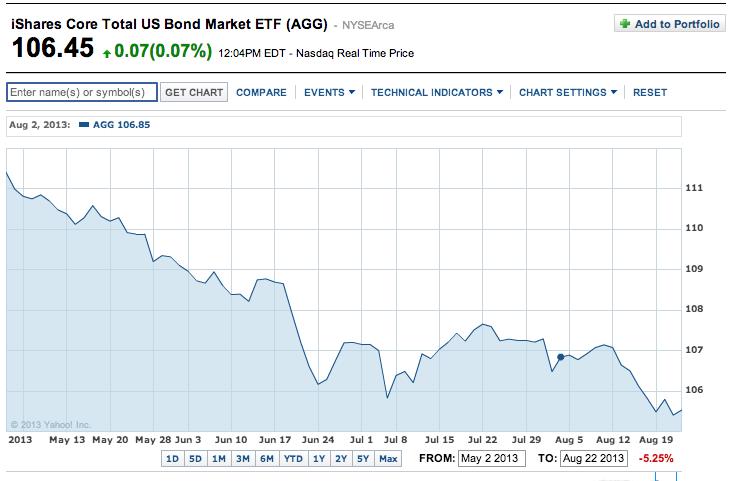 Moving from bonds to U.S. stocks, only two graphs are needed to illustrate the impact of anxiety upon stocks this year. To the left is a graph of the S&P 500 Index between January 1 and May 21 of this year – a steady move upward of 14% (in not quite five months): 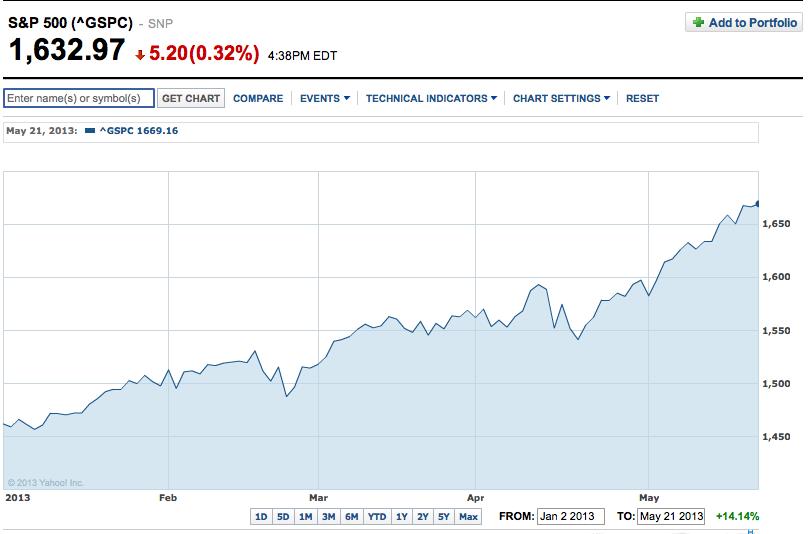 But look at what happened following the brouhaha brought on by the Fed Chair on May 22nd – a 5% descent in just one month, followed by a fairly fast climb upward by over 8% in about a month and a half, and then a six percent rollback during August! 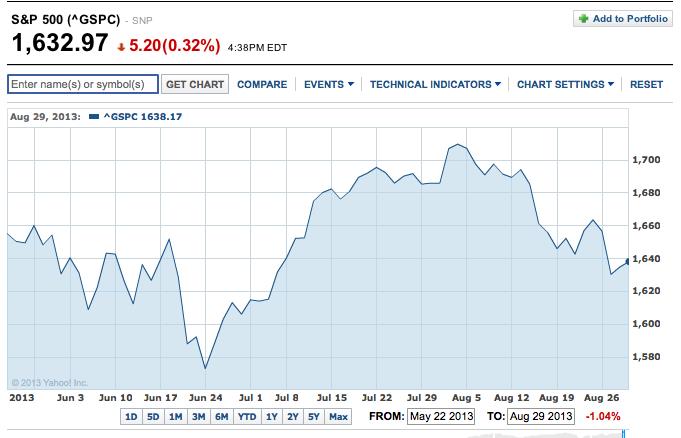 Almost one year ago, Natixus Global Asset Management released the results of an extensive survey of individual U.S. investors. Among the highlights of that survey was revealing data regarding the widespread nature of investor anxiety, profoundly impacting investment choices, as well as confidence regarding the prospect of not running out of assets before they die. Here is a summary of those results:

1)    More than three-quarters of those surveyed were concerned they would outlive their assets;
2)    Amazingly, throughout the survey, Generation Y[3] respondents demonstrated more anxiety than other groups – including the Baby Boomers;[4]
3)    Even more startling, these anxieties were prevalent among “Emerging High Net Worth Investors” (85% indicated concern about risk and outliving assets;
4)    Despite the stock markets having advanced quite steadily for three following the infamous “financial crisis”, more than half U.S. investors (53%) admitted that fear of losing money because of market volatility was the primary influence impacting investing and saving;
5)    “Volatility” was a dirty word among investors:

1. 71% indicated that volatility eroded their confidence in the markets;
2. 70% reported that future investment return expectations are regularly eroded by fear of volatility;
3. 68% responded that volatility undermined their ability to achieve savings goals.

6)    This fixation upon risk and volatility drove investors toward an asset preservation mindset, leading them to be timid and anxious;

The results from this Natixus Global survey (summarized above) go a long way toward providing “context” within which we can more clearly understand certain notable trends from recent years, including the following:

1)    The proliferation of ETF’s heavily oriented toward dividend-paying stocks;
2)    Sustained strength within the “bonds” space – at least until Bernanke’s May 22nd “wake up call”!
3)    Ongoing development of “Low Volatility” ETF funds, with new ones regularly touted as being based on an innovative, market-beating “wrinkle”;
4)    An expanding range of alternative equity index ETF’s – moving away from “market cap weight” ETF’s toward indices based on various other metrics;
5)    Within the fixed income space, twin trends toward lower duration and higher yield.[5]

Late this spring, Nationwide Financial reported the results from a fascinating survey of investors[6] with over $100,000 of investable assets regarding their fears – with the important “kicker” that it ranked “investor” fears relative to other “human life” fears. 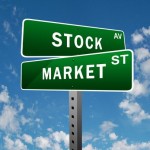 Most folks would agree that, among the most powerful of human fears, the following should be expected to rank among our strongest fears: a) death, b) losing a job; c) not being able to adequately provide for one’s child(ren).  Fascinating and surprising though it might be, here is the ranking of fears as revealed within the Nationwide Financial study: 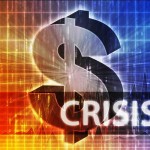 If your mouth has not dropped to the ground, I recommend you visit a therapist. Those are truly startling numbers, indicating a remarkable reversal of what an objective observer would expect in terms of relative human fear.

This brings us to the present period. I think it is well worth noting that, in the midst of a month-long equity swoon, the American Association of Individual Investors (AAII) released its August 22 weekly poll on “bullish sentiment” – showing that the number of “bulls” had dropped from 34.51% to 28.96%. That weekly result marked the sixth straight week that the percentage of “bears” grew!!

Why is that significant?  According to the Bespoke Investment Group, six straight weeks of increasing bearish sentiment has not occurred since 1987!![9]  From the AAII report, here are the past 7 weeks of sentiment data (below), starting at the top with the most recent data:

Wrapping up our look at sentiment, here is a brief peak at a separate metric – the “One Year Confidence Index”, contrasting the sentiment of individual investors with data reflecting institutional sentiment. You can see that individual sentiment is, at times, more bullish than that of institutions – and vice versa. Lately, individuals have been more bearish.

It’s not surprising that individual sentiment has recently been at the low end of its normal range, especially given the results we earlier reviewed from investor sentiment surveys! 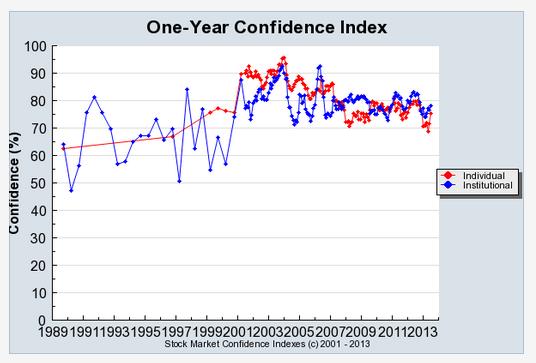 INVESTOR TAKEAWAY: Normally, when investor sentiment reaches a low, it is a bullish indicator[10].  As you now know, however, the S&P 500 Index declined by almost 2% during the last week of August. (See graph below). That is a great reminder that no one “indicator” is infallible, so never “bet the farm” on a sentiment indicator – even when it flashes a level of “strength” it hasn’t provided in 26 years!

What’s that you say?

“Tom, did you notice that the market was up about 0.3% on Monday prior to the Secretary of State’s TV speech about Syria?”

Yes, you are absolutely correct! Great observation. That confirms one of Market Tamer’s important teaching points – namely: “Fundamental news events trump indicators and moving averages (and most anything else).” That is just one more reason to always remain cautious and flexible. 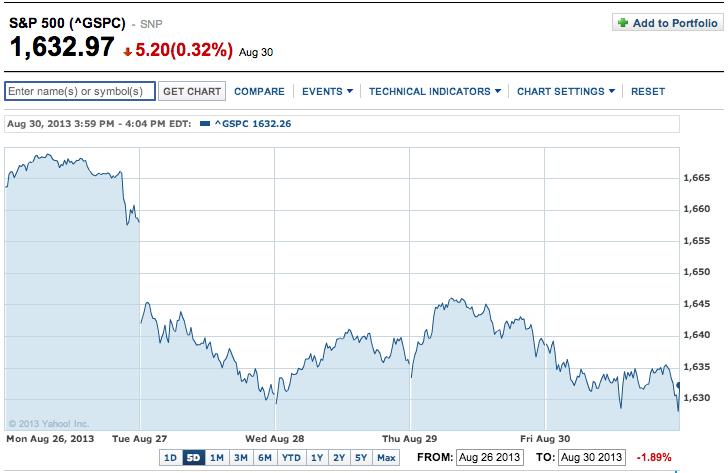 One thing I did notice about trading activity on Wednesday and Thursday was an upward bias through midday, then a fade. It made me wonder what the market might have done if political matters had not grabbed the “front page”. Of course, “what if’s” are not only meaningless, but can grab hold within us as a tool for our investment rationalizations – never a helpful thing.

It is much more helpful is to look ahead, focus on current market conditions and stick to whatever disciplined trading plan we utilize week to week. Within that context, however, I suggest you tuck away this bit of information on sentiment – since it is entirely reasonable to suggest that we are not currently in any danger of suffering from excessive bullishness

DISCLOSURE: Nothing in this article is intended as a recommendation to buy or sell anything. Always consult with your financial advisor regarding changes in your portfolio – either subtractions or additions.