I must start with a “full disclosure” caveat.  “Horror” is a very subjective term. What Jack or Harold might consider a “horror movie” could easily be a “relaxing, entertaining tale” for Thelma and Louise!

Within the investment world, the most genuine, objective “horror stories” include such things as:

1)    Bankruptcies – within which stockowners and/or bondholders lose most or all invested capital. (Refco, Enron);

Chart of scandal-ridden REFCO stock (to the left)

a)    For a first-hand account of that afternoon from a HFT desk professional, see http://www.youtube.com/watch?feature=player_embedded&v=51Zc23faz3o

Chart of the infamous ENRON stock as it collapsed (below) 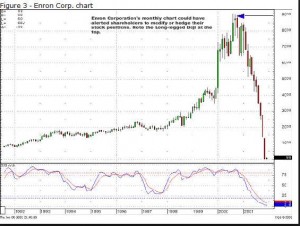 3)    The classic one-day heart-stopper: such as October 19th of 1987, when markets around the world crashed! (Chart of Dow Jones Index below):

Compared to these mega-horror stories, the tale I am about to unfold for you is rated a very mild “PG”. However, for all those who held stock of companies (or ETFs) in the Mortgage Residential Real Estate Investment Trust (mREIT) space on Monday, October 28th, what occurred on that day was scary enough to rate being called a very unwanted “Trick” during the week of Halloween. 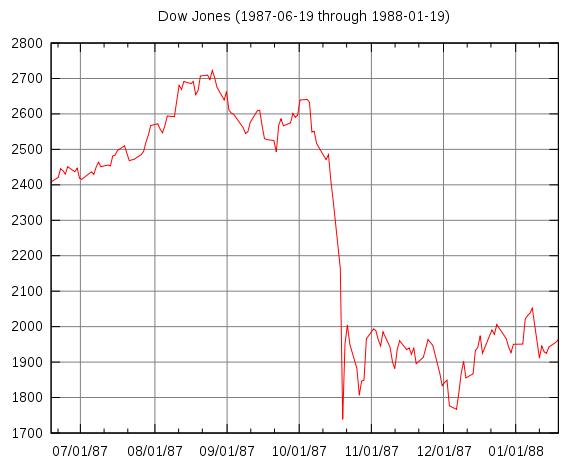 The primary catalyst for this Monday’s “Horror Story” was the earnings report from American Capital Agency Corporation (AGNC) – an $8.5 billion market cap mREIT that was founded in 2008 (based in Maryland). The business model is (on the surface) a simple one.  AGNC invests in residential mortgage pass-through securities and CMOs for which the principal and interest payments are U.S. government guaranteed. As with all REIT’s, it is not subject to federal income tax, but it is required to distribute at least 90% of all taxable income to shareholders.

Those sound like very enticing dividends from a stock with a seemingly “no-brainer” business model, correct? What could go wrong? Not so fast, my eager reader!

Let me ask you a trivia question based on the following premise:

PREMISE: In the current (historically) low-yield environment, with the market recently having been spooked by talk of the Federal Reserve “Tapering” its mammoth monthly asset-purchase program, we live with significant “interest rate risk” (ie. the risk of interest rates increasing, driving the price of bonds downward). As we know (and have just seen between May and September) when bonds are under pressure, that same pressure impacts higher yielding stocks as well!

That, my friends, is a good (albeit oversimplified) summary of AGNC!  As long as interest rates were moving downward and the borrowing costs for AGNC were stable to lower quarter after quarter, and as long as the assets on its books (mortgages) maintained a stable to higher value, all was well with the AGNC business model.

As we know, those “Goldilocks Days” (not too hot, not too cold; not too high, not too low; all is “just right!”) are long past, and it appears as though AGNC and many of its colleagues will be experiencing a good deal of stress in the months ahead.

Let me offer a “Reader’s Digest Condensed” version of the “horror” that was the AGNC third quarter earnings report on Monday: 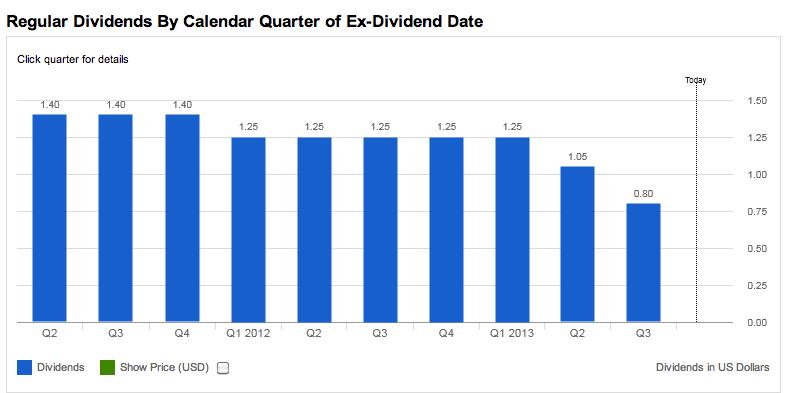 7)    One of the most telling data points from the earnings report was a further drop in book value per share – which is now $25.27, fully 22% lower than one year earlier![2]
8)    If we study the detailed data presented in the 3rd Quarter Investor Presentation, a number of additional metrics stand out. As an especially telling example, review the following graph, comparing the trend in EPS, Taxable EPS, and Dividends Per Share.[3] Anyone who understands simple math quickly grasps the truth that if EPS are shrinking, then dividends will (now or later) soon be shrinking as well!

9)    Finally, do you remember what nearly brought the U.S. financial system to its knees in 2008?  Yes, “over leveraged” balanced sheets. As I hinted earlier, AGNC utilizes a leveraged financial model. It depends upon cheap financing (from Federal Reserve QE) to enable it to leverage its asset portfolio and jack up its net spreads. Months ago, when rates trended smoothly downward, making money with that model was like shooting fish in a rather small barrel.  However, we “previewed” (unpleasantly, I might add) what a rising rate environment will look like when (between May and September) the yield on the (benchmark) U.S. Ten-Year Treasury Security moved from the mid 1% range to (virtually) as high as 2.9% — a huge jump in a very short period of time.[4] For better or worse, at some point in the future[5], higher rates will come in fuller force, and over a more extended time period.  The combination of those rising rates and a leveraged balance sheet will result in greater shareholder risk. AGNC management needs to be commended for reducing its leverage during the recent quarter. However, its leverage is still significant, as demonstrated within the graph below (from AGNC):

I am not the only one concerned about high financial leverage! Consider this story from the Financial Times recounting the grave concerns of the New York Federal Reserve Bank:[6]

“Regulators with the Fed have been probing the proliferation of mortgage real estate investment trusts, or mReits, where long-term mortgages are financed with short-term loans…. The concern is that a rise in interest rates could prompt a selloff.”

An unnamed individual familiar with these conversations within the Fed, as well as Fed interactions with banks and mREITs is quoted in the article saying: “In the spring, they came into a lot of the banks and kind of did a deep dive in that topic.”

The article went on to report: “After inquiries from the Fed, mReits curbed the purchases of securities and short-term borrowings because of talk of higher interest rates.” 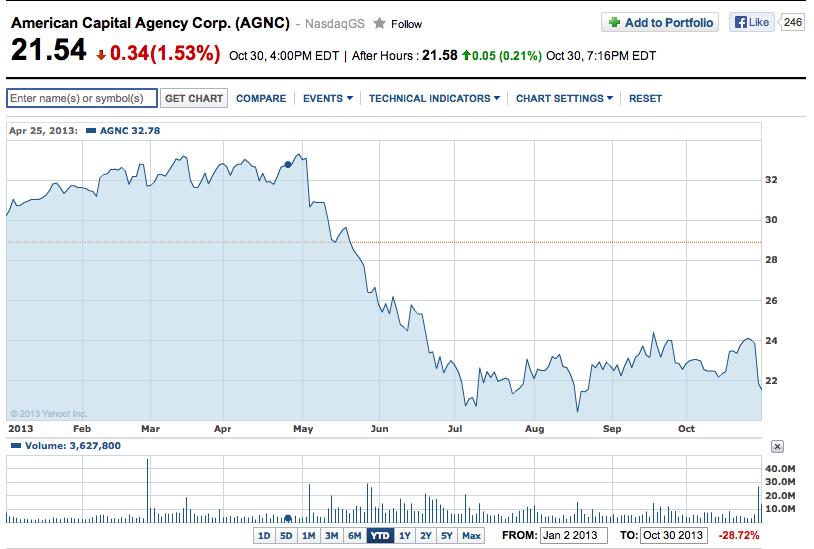 Evidently (according to the Times) the mReits have had the attention of Fed regulators since February because of the possibility of an “overheating within credit markets!”

You can see (of course) the “big dip” caused by Ben Bernanke’s “Taper Talk” in May. The stock price recovered a bit in September.  However, take a long look at this past Monday’s steep fall off a seeming cliff! 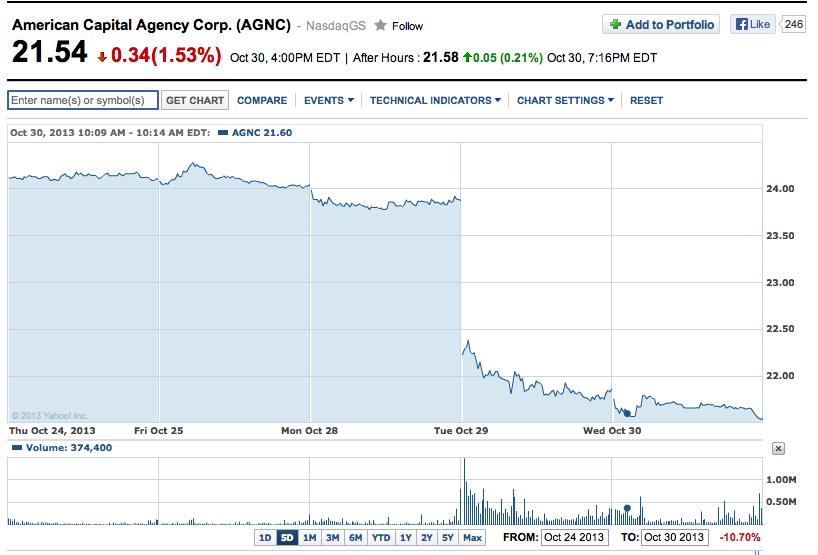 There is one more major point related to AGNC and the mREIT space of which every single one of our readers needs to be aware:

The biggest ETFs that focus within the mREIT investment space are not what even the most charitable among us could call “well-diversified”. There is a good deal of concentrated exposure – exposure that everyone who buys on of those ETFs needs to bear in mind. 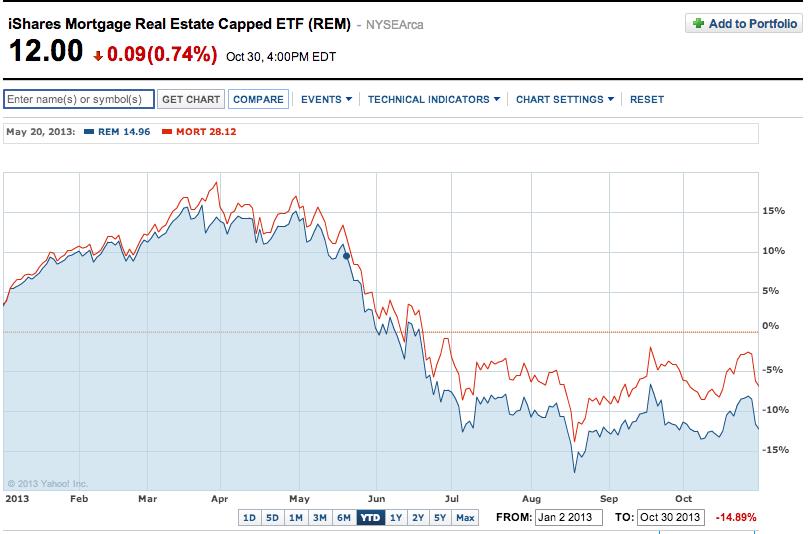 Yes, you are correct that neither one of these ETFs looks much better than AGNC.  The mREIT space (not surprisingly) consists of stocks with a high correlation to one another.  Amplifying that reality is the fact that allocations within each of these ETFs to certain individual mREIT stocks can be hefty.

For example, the three biggest holdings in REM include:

That means that over 39% of REM is accounted for by three stocks! REM fell 3.4% on Monday, trading more than triple its normal volume?!

REM currently boasts a SEC Yield of over 13%, while MORT’s SEC Yield is a tad greater than 10%. However, logic would dictate that these yields will, for some time to come, bear a higher risk of being lowered than prospect of them being increased.

Let me wrap up by offering two contrasting views on AGNC (and by implication, impacting REM and MORT):

However, as we all know, if everyone shared the same opinion, we’d never have anyone available to buy the shares we want to dump, or sell the shares we want desperately to buy! On that note, the firm Keefe, Bruyette & Woods has a decidedly brighter view on AGNC’s prospects moving forward. The firm believes AGNC will “outperform”.  Yes, that is rather lukewarm praise, especially since they simultaneously lowered the price target on AGNC from $27 to $25.50.  However, it is a whale of a lot more positive than the view of Sterne Agee!

INVESTOR TAKEAWAY: If you owned AGNC on Monday, October 28th, the one-day loss of over 8% in share value surely felt as though the spooks, goblins, and evil spirits had conspired to bring Halloween into your life three days early!  I will grant that management gave the effort of producing an upbeat Investor Presentation the “good old college try”.  However, they didn’t convince me!  The trends I consider “key” ones are looking (at best) “tired” and (at worst) “scary”!

For those who are more risk tolerant that I am, the fact that AGNC is currently trading about 6% below book value is a plus. And those who have total confidence in being able to identify technical price patterns, candlestick signals, etc. may want to utilize AGNC as a convenient trading vehicle (it sure has shown significant volatility).

However, I aim to stay away from AGNC for a while and let things settle. I am not much more inclined to jump into either REM or MORT – for many of the reasons I have hinted at above.  In addition, please keep in mind that, although both ETFs have very tantalizing yields, neither one of them is anything close to being a diversified fund. They are each a concentrated fund in a very interest rate sensitive space, so caution (and “open eyes”) are required if you choose to buy them. You absolutely do get more diversification than if you buy any single one of their component stocks.  However, in the “big picture” the mREIT group tends to move very much as though they are dance partners!

DISCLOSURE: In days gone by, the author owned AGNC, REM, MORT, and NLY.  Currently, he owns NLY – but will be watching it very closely!  Nothing in this article is intended as a recommendation to buy or sell anything. Always consult with your financial advisor regarding changes in your portfolio – either subtractions or additions.

[1] I held AGNC as an integral part of my portfolio until about 6 months ago; I recall that we (shareholders) took a deep breath before each earnings report, expecting possible bad news on the dividend.
[2] This marks the fifth straight quarter of decreases in book value
[3] You can find the PDF presentation at http://ir.agnc.com/phoenix.zhtml?p=irol-eventDetails&c=219916&eventID=5042223
[4] Countless experts pointed out that the rapidity of that move was nearly unprecedented.
[5] Whether that means months or years from now….
[6] http://www.reuters.com/article/2013/10/27/us-newyorkfed-mreits-idUSBRE99Q0D220131027
[7] Yikes!  That is a huge cut!
[8] I don’t think Sterne Agee professionals will be receiving any cocktail invitations from AGNC management!