My adult kids roll their eyes whenever I talk about “back in the day”. However, those younger than “Boomer” age cannot possibly fully appreciate the speed with which technology of all types has advanced … without clear memories of what life was like without that technology. As a simple illustration, during the days of my youth, this is what we had available:

3) No remote control for the TV;

4) Only five TV channels in the Chicago area;

5) All documents were prepared by hand or with a typewriter;

6) Accounting was done by hand, with a calculator (preferably with a tape);

7) All telephones were “landline”;

8) When we wanted to communicate with someone, we had to either:

Occasionally we’d read articles (or science fiction tales) about people communicating via video (eg. “The Jetsons” TV show), or talking into their wrist communicator (Dick Tracy), or letting machines clean their house (Jetsons), or a government that saw/heard everything we did (1984)… but the reality-based among us considered much of that to be merely fanciful thinking.

Weren’t we “small minded”?  We didn’t trust our imaginations enough to believe that a “Brave New World” was just around the corner! Today, not only do we have a government watching and listening to us everywhere, but we also have “TV” available (in spectacular color, no less) through computers, laptops, tablets, smartphones, etc.  And who really needs to actually have a face-to-face with anyone anymore when we can text them, instead?!

Meanwhile, we see more and more evidence that technology is becoming an integral part of our everyday life – from medical care monitored remotely via smartphone technology, to parents’ ability to visually check up on their kids at home (while the parents are still at the office) and cars equipped with computers that monitor the car’s operation and alert the driver whenever a problem crops up.

We’ve also seen technology emerge as an ever-growing part of surgery (the last time I entered a surgical suite, it felt like being pushed into the control room of a spaceship). And robots are assuming a growing number of tasks within factories… and now homes.  In fact, I’ve lately noticed commercials for robotic home floor cleaners – something I always wished for during my youth (as I pushed the heavy Hoover vacuum around the house) but feared would always remain just a distant dream!

[See a great video by Henrik Christiansen on “Robots for Everyone” at: https://www.youtube.com/watch?v=yvZqyXeOtUo#t=862 ]

These are exciting developments!  And insightful investors have made room within their asset allocation plan for significant exposure to technology equities!  However, until now, most funds and ETFs within the technology space have segmented their holdings among just a few categories, such as: Computers, Software, Internet, “the Cloud”, Biotech, Social Networks, etc.

However, now for the first time, investors can access an ETF that focuses itself upon the Robotics and Automation Sector!  A co-founder of this ETF, Frank Tobe, has demonstrated expertise in this area through his long-held position as Editor of The Robot Report.  Tobe has become convinced that this sector has been growing to become “the next big thing”, and was struck by the absence of any “pure play” in this sector among available funds.

About one year ago, Tobe was joined by Rob Wilson, whose technical skills helped Tobe convert his existing database and expertise into an investable index!!  The name of that index is the ROBO-STOX Global Robotics and Automation Index.

Of course, the creation of this particular index empowered Tobe and Wilson to found the “first to market” “Robo” ETF: ROBO-STOX Global Robotics and Automation Index ETF (ROBO).   The ETF began trading in October of 2013, so it is still so new that it does not yet have a “200-Day Moving Average”!

What do we know about the make-up of this ETF?  The ROBO-STOX Global Robotics and Automation Index consists of 78 U.S. and international companies within the robotics and automation sector that have met certain criteria – including having a market cap of at least $200 million and qualifying for listing within the S&P DJI Global Broad Market Index. The design of this Index is slanted toward finding robotics companies that demonstrate the most promising long-term value.

Moving forward, the Index will be rebalanced each quarter, and the Committee has the flexibility to remove a company from the Index if and when it is felt that company no longer meets the Index’s criteria.  It is expected that the Index will continue to weight the portfolio at 40% for Bellwether Stocks and 60% for Non-Bellwether Stocks.  These selection criteria resulted in a much more diversified, and therefore more “investable”, portfolio.  See a listing of the current stocks held by ROBO in the APPENDIX at the end of this article. In addition, you will find a breakdown of ROBO by market cap, geography, and sector!

Why should an investor be drawn toward stocks in this space? Although automation has been around for a long time, the robotics/automation industry is still in a relatively nascent stage of development. A look at some graphs can offer a hint at the potential that lies ahead within this space.

For decades, the high-cost of robotic automation meant that they were only economically feasible within industries dependent upon a high-wage, low-skill labor model.  Specifically, “robotics” has assumed a strong toehold within the Western automotive industry because so much of that work is repetitive (dull), dirty, and/or dangerous (and wages have been high). However, as robotic technology has advanced and costs have moderated, it has become increasingly practical (and profitable) to incorporate robotics within a wider range of general industrial production.

Given that background, take a good look at this graph, which illustrates the very limited penetration of robotics within general industry among some of the world’s largest economies. That lack of penetration suggests that future demand could become explosive as current trends continue to evolve. 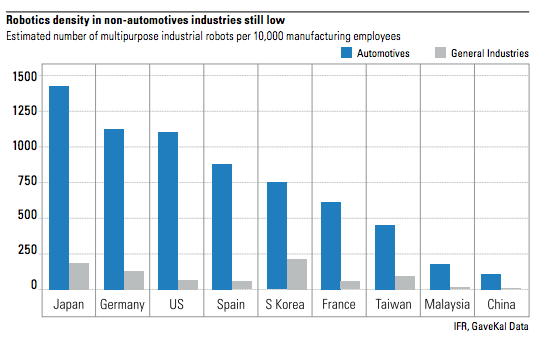 This graph shows the relative density of robotics in the automotive industry versus industry in general!

In fact, Tobe, Wilson, and their colleagues believe that (according to their analysis) the Robotics/Automation Industry is on the cusp of making a huge leap in its economic development, leaping across “the Chasm” – meaning that the “Innovators” stage has now moved into the “Early Adopters” stage (see the text in the slide). 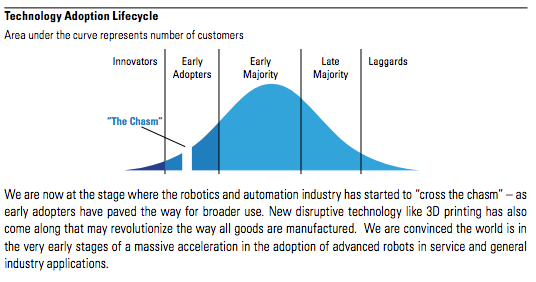 IMAGE DESCRIPTION: The founders of ROBO believe that the automation industry is on the brink of accelerated growth! The current “stage” of robotics is jumping over the do-called “Chasm”.

In addition, demand for robotics is not just accelerating in general industry, but also within the areas of military/defense, healthcare, and search-and-rescue (we’ve been watching clips of the latter on TV news accounts of the big Malaysian plane search in the Indian Ocean).   Among current U.S. Department Defense Advanced Research Projects Agency (DARPA) projects is the development of a robot with two arms and hands that can unzip a duffle bag or luggage, search them for illegal items, and then zip them back up. (A upgrade for airport security!)

And of course, any regular reader of U.S. financial news is familiar with the commitment of several key global companies to commit resources toward the development of robots:

a) Google created a robotics division and acquired eight companies within that space;

b) Foxconn and Google announced a cooperative venture to develop robots for the use of each partner;

c) Apple reported last year that it would invest $11 billion in automation/robotics; and of course

d) Amazon.com acquired a robotics firm (Kiva Systems) in 2012 and announced recently its plans to (eventually) deliver packages via drones!

You might be thinking: “These ‘global companies’ are all U.S.-based. Why does ROBO need to be a “Global” fund?  The answer is simple. Look at this graph, identifying the number of robots per 10,000 employees (ie. “Robotic Density”) within key economies around the world: 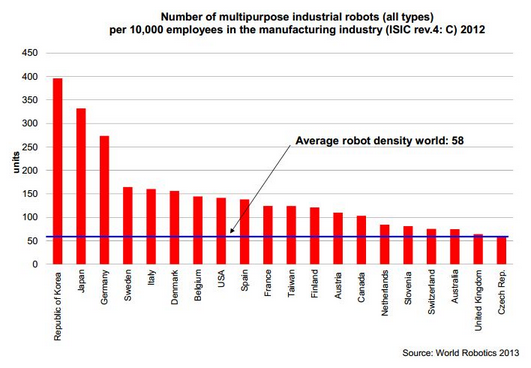 This graph illustrates that the U.S. is not fully in the "vanguard" of the adoption of robotics!

As you can see, the U.S. is not exactly in the “vanguard” of robotics adoption within our economy!! The ROBO ETF is global because there are so many profitable industry players around the world!!

With the caveat that equities have had a very “uneven” 2014, let’s take a look at the still limited performance graph of ROBO since its introduction. ROBO is in blue, the NASDAQ Index is in red, Oracle Corporation is in green, and TWTR is in brown.

This graph demonstrates that, since its introduction in October of 2013, ROBO has underperformed the NASDAQ, out performed Oracle (ORCL) until recently, and out-performed Twitter (TWTR) by 30%

We can see that ROBO trended with the NASDAQ for half of the period shown, and then began underperforming – resulting in an approximate 15% underperformance since October. However, ROBO outperformed ORCL through most of this period, and has outperformed the much-hyped TWTR by 30%!!

Obviously, we’ll have to keep an eye on ROBO during the months ahead to see how it fares within the marketplace!  However, it might be worth noting that, on a retrospective basis, the Index did (on paper) significantly outperform the mainline indices between 2003 and 2013 (see the graph below). 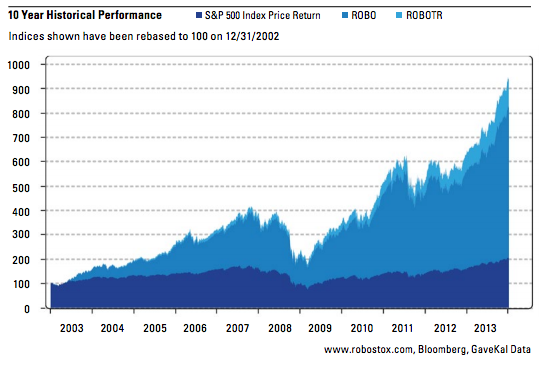 Through backtesting (beware that backtesting has its limits) this graph shows that the ROBO Index outperformed the S&P 500 between 2003 and 2013!

I wrote this article because I was surprised by the fact that no one else had yet developed an index and fund focused on robotics! It would be irresponsible for anyone to recommend a new, as yet untested, ETF, which is why I am not making any such recommendation.

That being said, those readers who are more adventurous may want to review this graph of ROBO showing the 8-Day and 21-Day Exponential Moving Averages. You may see tradable patterns. 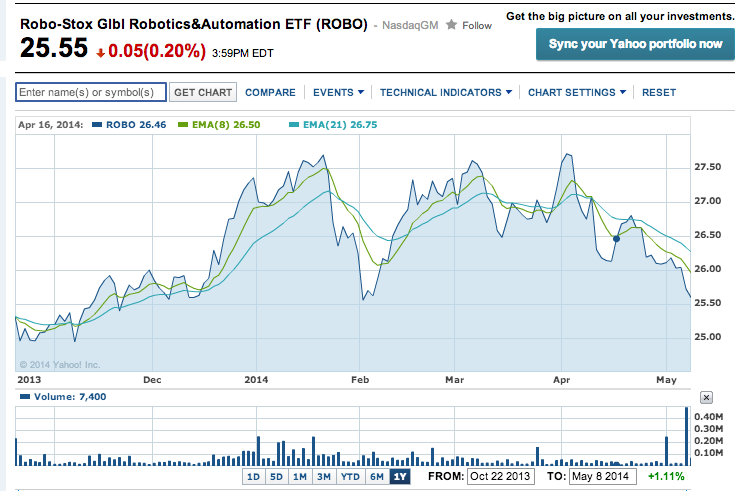 Perhaps some of you can discern a tradable pattern in the ROBO price vis-a-vis its 8-Day and 21-Day Moving Averages.

Most importantly, I suggest you remember that this very focused ETF exists, and as the robotics and automation industry develops and expands (and perhaps “booms”) in the years ahead, consider investing some assets in ROBO.

Regarding an appropriate allocation, I was impressed by how candid co-founder Tobe was on that topic in a recent interview:

I respect Tobe for not overhyping his ETF by underplaying the need for everyone to manage risk through diversification. I think his strategy is balanced and well-reasoned!

Finally, I strongly encourage you to enjoy the following video of a robot that was designed and produced to be an amazing table tennis opponent: https://www.youtube.com/watch?v=tIIJME8-au8#t=162.  I guarantee you that it is enlightening, but it is also delightfully entertaining!!

DISCLOSURE: The author currently does not own ROBO. Nothing in this article is intended as a recommendation to buy or sell anything. Always consult with your financial advisor regarding changes in your portfolio – either subtractions or additions. 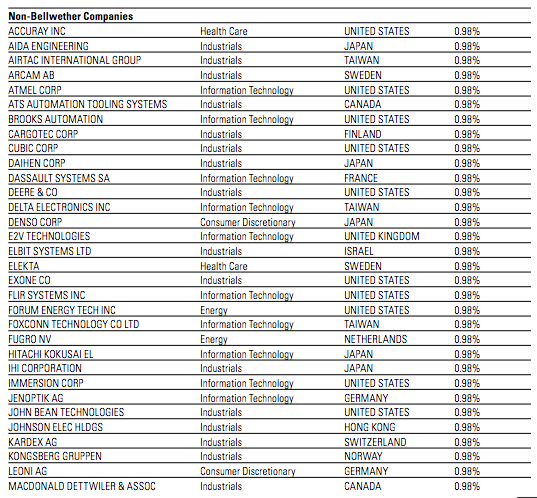 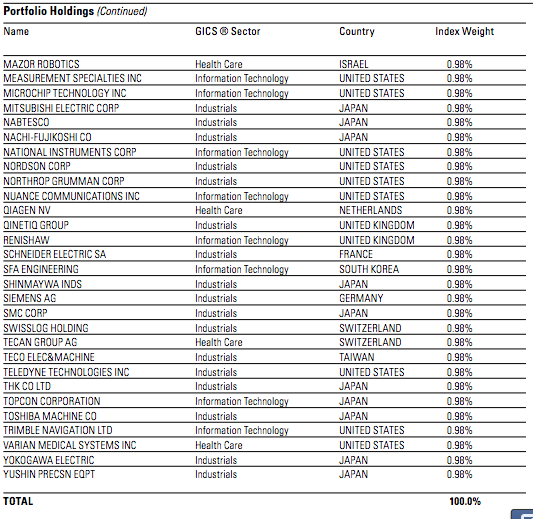 Here are the remaining "Non-Bellwether" components within ROBO! 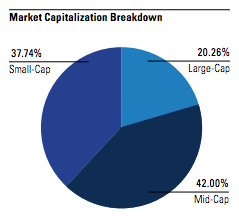 This graph shows the market cap breakdown of the stocks within the ROBO portfolio!

These graphs report a breakdown of the ROBO portfolio by geography and industry segment.

For more details about ROBO, see:

These 4 Mistakes Will Ruin Your Retirement Security

How Much of My Former Income Will Social Security Replace?

Where Will Disney Be in 5 Years?