Can you remember back to a day when your parents made a big decision that drastically complicated your life — a decision that made no sense to you and totally frustrated you? You were still trying hard to adjust to that decision when, from out of the blue, your parents told you that their decision (the one you hate and with which you were still struggling) was “for your own good”?

Remember how that made you feel?!

I suspect that is exactly how tens of thousands of retirees felt on Monday (October 1) when Federal Reserve Chairman, Ben Bernanke,  speaking before the Economic Club of Indiana, declared that his continuing efforts to flood the economy with money (QE1, QE2, and now QE3) is in the “best interest” of retirees living off their savings income.

Currently, the Federal Reserve's “ZIRP” (“zero interest rate policy”) has resulted in money-market rates averaging between 0.07% and 0.10%, while Bankrate.com estimates that the average rate on a current six-month CD is less than .5%! During the past couple of years, I have tried to help senior citizens find “safe” ways to earn a decent return on their hard-earned savings. Trust me, it is next to impossible to find a sufficiently low-risk return on which these retirees can earn what they need to afford the “comfortable life” promised to them during the forty years (or more) of their working life – when they labored as hard as they could and saved as much as they could! 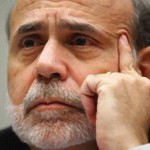 Chairman Bernanke claims that ZIRP is in the best interest of fixed income senior citizens!

In most cases, the “projected return rate” used in planning for their retirement was much, much higher than rates currently available. For example, as recently as February of 2007, the six-month risk-free Treasury Bill rate was 4.96%!  http://(http://www.data360.org/dsg.aspx?Data_Set_Group_Id=243&page=2&count=500)  That means that a typical retiree would have ten times as much interest income each month (the current “average rate” of .49% times ten) if rates were as high as during 2007!

Many retirees tell me that they feel the Fed is trying to reignite our moribund economy on their backs. They have a point. While seniors scrap along with a pittance of interest income, Wall Street investment houses are having a field day making millions of dollars on rising stock prices, as well as the even faster moving gold and silver!

Why do seniors have to be the ones who suffer? Great question! Thousands of such income-depleted seniors have had to cut back on their budgets and lower their food costs.

It is bad enough that seniors get practically no return on their savings. It borders on gross insensitivity for Mr. Bernanke to claim that “ZIRP” is in the “best interests” of suffering seniors! In fact, his claim is reminiscent of the eighteenth century quote: “Let them eat cake!” – supposedly spoken by a princess when told that the poor had no bread.

3 Stocks to Buy to Invest in Augmented Reality

Surprise! Robinhood Investors Are Missing Out on These 2 High-Growth Stocks