Since we just completed the third quarter of 2013, it could be telling to review which ETF’s have performed the best thus far year-to-date (as of very early October).

Assuming you don’t know which ETFs are in that list, which ones would you guess are included in the list?

On the other hand, medical related stocks have done well – especially in the biotech category. That is promising!

We are using the “Top Ten List” prepared by ETFTrends.com for the period covering the first three quarters of 2013 (I took their raw data, added P/E and Yield, and inserted it all into a worksheet (the graph below is sorted by performance through three quarters)):

WOW! Congratulations, folks! You were absolutely correct that “biotechnology” was a big winner – capturing 20% of the “Top Ten”!! (PBE and BBH).  And don’t you just love the official name of BBH – PowerShares Dynamic Biotechnology & Genome Portfolio!!

Amazingly (despite my evidently off-target assumption that all Chinese stocks had a rough three quarters) PowerShares Gold Dragon China Portfolio (PGJ) finished in the #7 spot!!  However, I can easily explain away my mistake.

Whenever we assume that all equity ETFs from any particular nation will perform roughly in sink with one another, we will all too soon discover that we “assumed incorrectly”!!  As a case in point, consider this graph of iShares China Large Cap ETF (FXI) (blue) vis-à-vis PGJ (red) from January 1 through September 30 (below): 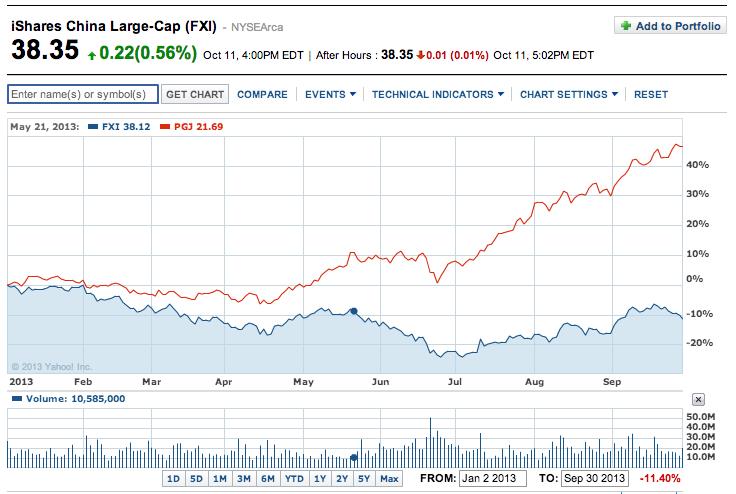 I’ll take the almost 50% return from PGJ and skip the 10% loss in FXI, thank you! This mammoth differential in return can be accounted for through a very quick look at sector allocation. Here is the allocation breakout for PGJ: 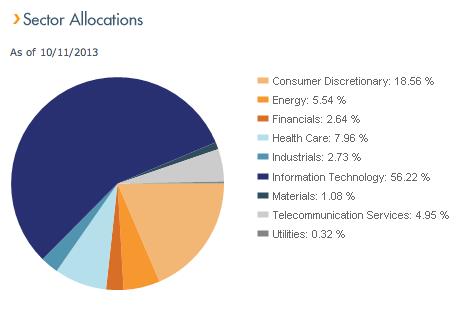 Note that PGJ is not truly diversified, having poured over 56% of its assets into IT, while “financials” account for less than 3% of the portfolio.

FXI virtually “reverses” the allocation of PGJ, with “financials” at the top of the sector list with almost 56%, while only 7% of assets can be found in IT!!

Guess which stock sector excelled in China this year? 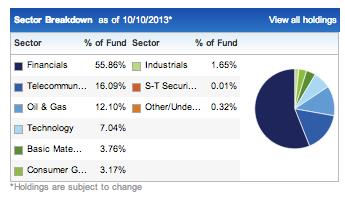 Turning our attention back to the “Top Ten “Social Media” stocks excelled during 2013. Yes, I absolutely knew that LinkedIn (LNKD) had been strong, but I have such a strongly negative opinion on Zynga (ZNGA) and Facebook (FB) that I realize now (too late) that my “market view” has severely detracted from my “market awareness”.[1]

That is why I missed guessing that Global X Social Media Index (SOCL) made it into the “Top Ten” list for the first three quarters (coming in at #6). 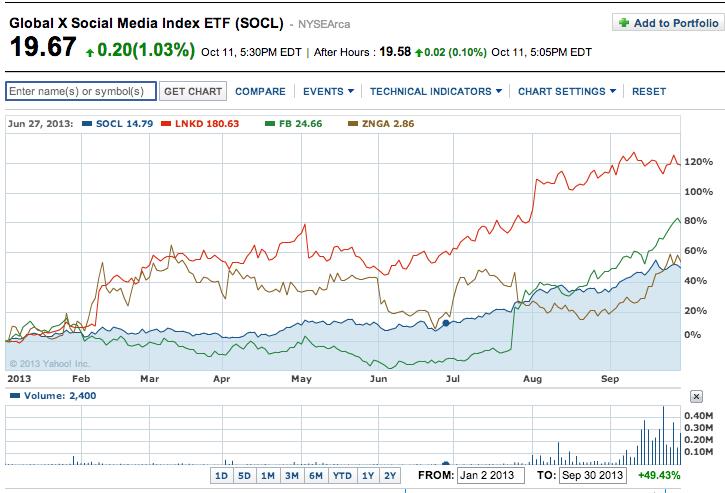 Notice that LNKD was like the “Road Runner” from February onward, and while ZNGA started strong, it faded. Meanwhile, FB held SOCL back all year until July, when it shot upward like a rocket!!  No wonder SOCL was an out-performer!

However, all of these narratives about the “Top Ten List” pale in comparison to the “headline story” from this “Top Ten List” – six of the top ten are within the “Alternative Energy” space, and the top ETF outperformed the runner-up by over 40% (note that both the number one and number two ETFs are “Solar” ETFs!!)

That is amazing…. simply amazing! 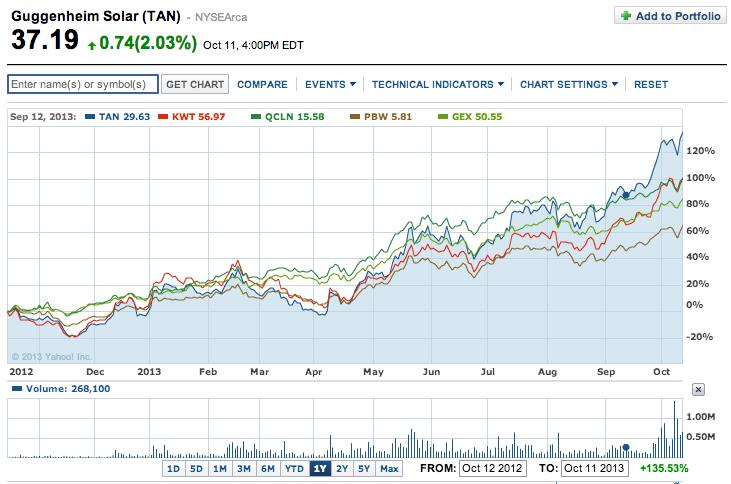 Looking at the graph detail, you’ll notice that TAN and KWT were both more “in the pack” performance-wise through the first six months. Then from July through September, they each had strong rallies – pushing TAN to the top and helping KWT nudge out QCLN for #2 by the end of September!

In addition, we can intuit that, for ETFs moving upwards by anywhere between 60% and (over) 130% in just 9 months, “volatility” levels have been impressive!!  One way to see this point more clearly is by comparing TAN vis-à-vis the S&P 500 Index, as well as three of the stocks that have helped “define” volatility this year: Tesla (TSLA), Solar City (SCTY), and Facebook (FB): 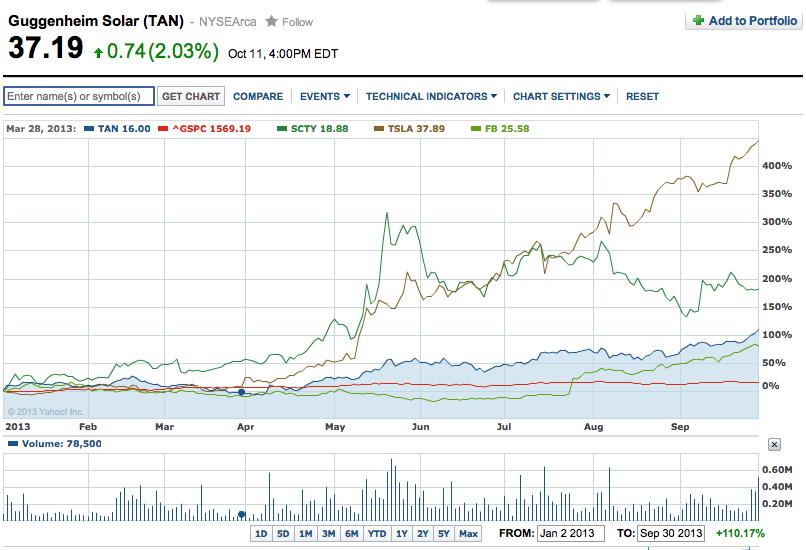 As you can see, TSLA and SCTY make TAN and FB look like “sticks in the mud” performance-wise, while the S&P 500 chugs along relatively steadily.

Since you know that TAN moved up over 130%, that should convince you to ask yourself (before buying SCTY or TSLA):  “Is my stomach really strong enough to cope with volatility that exceeds even that of a stock which moves up 130% in nine short  months??”

Finally, there is the solitary wind power specialist ETF (FAN), “bringing up the rear” within the “Top Ten List”.[2]  However, I wouldn’t call 55.7% a “shabby” nine-month return, even though it did lag the other five “Alt Energy” ETFs!

However, if we review the following graph of FAN vis-à-vis the generic “Alts” – we can see that KBW made a “mad dash” toward the “finish line” to just edge out FAN. 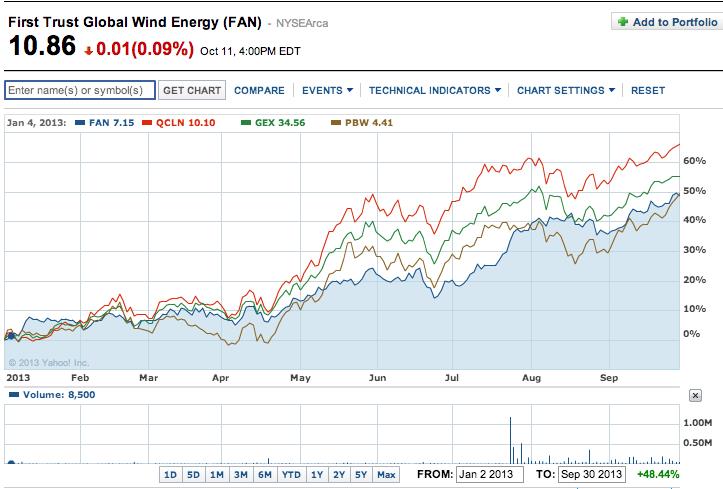 Are you surprised by the performance of the “Alt Energies” thus far this year?

What do you think their prospects are for the next nine months?

There have been some tailwinds helping these stocks, including at least the following:

1)    They are “hot” on Wall Street right now;
2)    Tax laws favor them in a number of ways;
3)    Voluntary (or mandatory) State “Renewable Portfolio Standards” (RPS)[3] goals provide encouragement and support in the migration from fossil fuel to renewable energy. 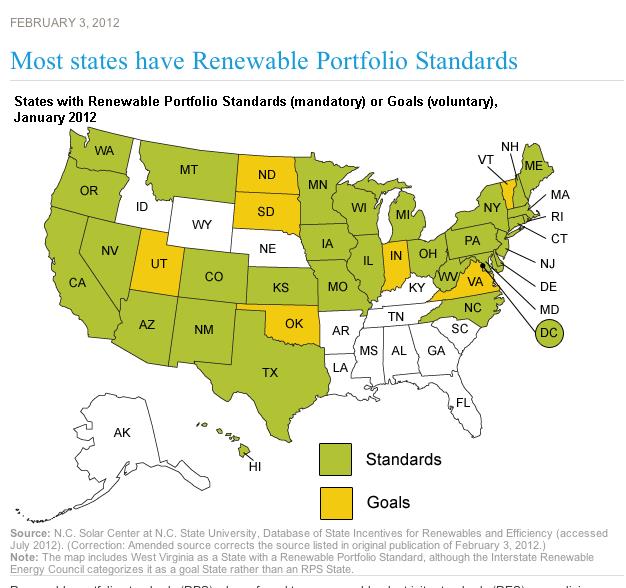 Here are some other anecdotal signs of momentum within the “Alt Energy” space:

a.   TOT has invested over $1 billion in Sunpower (SPWR)

2)    The former British Petroleum (BP) made a big public production of changing its “brand” in 2000 to “Beyond Petroleum” – a move almost universally recognized as a PR and marketing stunt.

a.   Within the past year, it needed to raise cash (to pay for “spill” settlements);
b.   It originally announced it intended to sell $3.5 billion of its U.S. wind farms as part of this cash-raising plan;
c.   To the credit of BP, it has recently reversed that decision and will keep them.

3)    Royal Dutch Shell (RDS-A) has let it be known that they realize they are a company in a depleting industry – recognizing that its “largest client will be non-existent by 2070.”

a.   The U.S. Wind Industry surpassed 50,000 megawatts of electric power generating capacity;
b.   Solar power established itself as the fastest growing energy source in the U.S.

a.    No state is more “Oil-Centric” than Texas, and yet Texas has already blown past its 2015 RPS goal!
b.    Texas has more than 1,300- companies employing over 100,000 folks in industries that (directly or indirectly) relate to renewable energy![5]

6)     In Colorado, the American Wind Energy Association estimates that the state’s RPS is supporting over 5,000 jobs generating a billion dollars a year in wages, along with millions in leasing revenue for landowners participating in the policy.

So there you have it… the “Top Ten” ETFs through the first three quarters of 2013. In order to provide you with a bit more to think about, here is that same list ranked by P/E Ratio (as provided through YahooFinance.com):

INVESTOR TAKEAWAY: It has been (thus far) the “Year of Alternative Energy” within the U.S. stock market!

Will this trend continue? No one can say for sure.  However, two fairly “safe” observations can be made:

1)    These stocks have climbed very quickly, and at a pace that is not likely to be sustainable. If you have the stomach to invest in any of these ETFs, please do so with a full awareness of the risks involved. Watch for pullbacks toward the bottom of a trading range or a Keltner Channel, or at or near a strong “support” level.  Always maintain a protective stop-loss order. Don’t be greedy if your trade moves up to a reasonable ROE level!
2)    If my pocketbook was “unlimited” I’d be willing to invest 5-15% of my assets in “Alt Energy” now,[6] having great confidence that within ten to fifteen years,[7] my investment would show a very pleasant profit.

Be aware of the danger of “chasing” performance! Countless studies have established, beyond a shadow of a doubt, that equities are cyclical.  One thing this means is that this year’s “top performer” is as likely to be next year’s “dog” as it is to be a #1 or #2 performer next year!

Finally, learn from the error I confessed about earlier —  my “market view” clouding my “market awareness”, which can never, ever be helpful in either investing or trading!!

DISCLOSURE: The author does not currently own any of the stocks mentioned above. Nothing in this article is intended as a recommendation to buy or sell anything. Always consult with your financial advisor regarding changes in your portfolio – either subtractions or additions.

[1] If you are scratching your head at that observation, here is an attempt to elaborate. Because of my prejudice against ZNGA and FB, I tend to pay more attention to days when they fall, and (evidently) discount days when they move up. Hence, I become “blind” to some significant price trends in the market!!
[2] Yes, you are correct. Technically, it isn’t “tenth” – it is tied for ninth with BBH. But narratively, it works best if you accept FAN as tenth.
[3] These are policies designed to increase generation of electricity from renewable resources. These policies require or encourage electricity producers within a given jurisdiction to supply a certain minimum share of their electricity from designated renewable resources. Generally, these resources include wind, solar, geothermal, biomass, and some types of hydroelectricity, but may include other resources such as landfill gas, municipal solid waste, and tidal energy.
[4] The world’s 9th largest oil company.
[5] The state’s controller said: “After the RPS was implemented Texas wind corporations and utilities invested $1 billion in wind power, creating jobs…and increasing the rural tax base.”
[6] Never all at once, but through dollar cost averaging or “staged” buying points.
[7] Barring, of course, an economic cataclysm.

Here’s Why Pfizer Fell 14% in June