Continuing our look at Warren Buffett’s March 1st Berkshire Hathaway letter to shareholders, Buffett once again establishes why he has become known as “the Oracle of Omaha”.  At the letter’s start, in the midst of engaging in two acts of contrition (see “An Oracle Who… Owns Up… And Oversees” at http://www.markettamer.com/blog/an-oracle-who-owns-up-and-oversees), Buffett draws attention to the performance chart of Berkshire relative to the S&P 500 Index that appears on the first page of his report.  In conceding that Berkshire not only underperformed the Index during three of the past four years, but might underperform during 2013 as well, if the market continues on its current pace, Buffett points out a trend obvious within that performance chart: “We do better when the wind is in our face.”

Lest you imagine that Buffett’s comment is some sort of “excuse” or “cop out”, consider these figures:

I will refrain from offering direct investment advice to anyone reading this commentary. Among other factors behind my not presenting investment advice to readers is this rather overwhelming one: I have no way of knowing your personal investment style or risk parameters. However, now that the Dow Jones Industrial Index has scaled an all-time high (and the S&P 500 Index is just 3 points shy of its October 2007 record high (today is 3/14/13), it would be prudent for anyone to perform a comprehensive review of asset allocation and risk metrics within her/his portfolio.  As you engage in that review, take a good look at this chart: 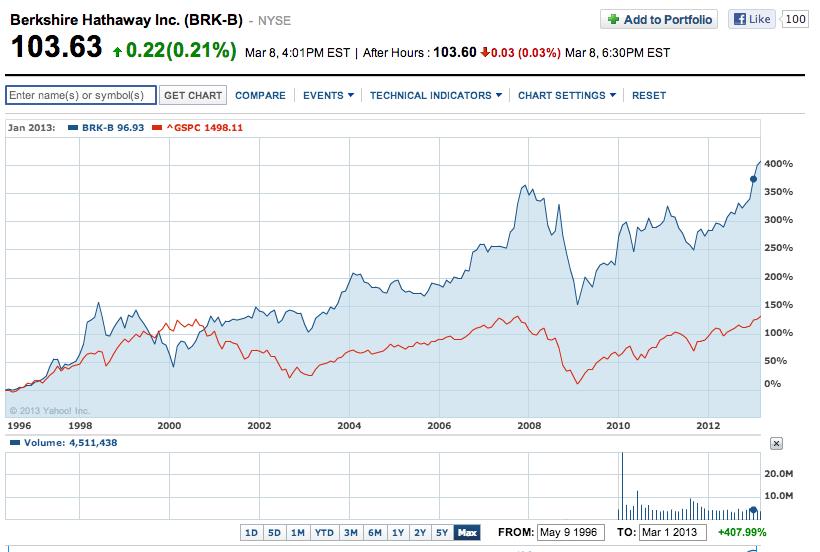 GRAPH of BRK-B: This graph compares the performance of Berkshire Hathaway to that of the S&P 500 Index between 1996 and 2013. It is clear that Berkshire shines in periods when the S&P struggles. (Graph by Thomas R. Petty, C.F.P., using data from YahooFinance.com)

So, I cannot and will not give anyone specific advice. However, I can offer this thought without hesitation: Anyone who desires to remain exposed to the U.S. equity asset class, but diversify into an investment with a lower risk profile than the S&P 500 Index, would do well to consider allocating some funds into Berkshire Hathaway (BRK-B).  (Other alternatives would include any one of a number of high-dividend U.S. equity ETFs or “low volatility” U.S. equity ETFs.)

Over and above Buffett’s proven record, no investor could ask for a more genuine and committed manager of “other people’s money”. Consider these words from Buffett in his letter:  “Charlie (Munger) and I believe the gain in Berkshire’s intrinsic value will over time likely surpass the S&P returns by a small margin. We’re confident of that because we have some outstanding businesses, a cadre of terrific operating managers and a shareholder-oriented culture. Our relative performance, however, is almost certain to be better when the market is down or flat. In years when the market is particularly strong, expect us to fall short.”

Yes, you are not imagining it – an internationally recognized icon of investing is humble and realistic. What he can offer is not for everyone – just for those who want to entrust their savings to someone who is trustworthy and has a long-term record of steady performance. An “oracle” indeed!

But Buffett is not only an “oracle” because he is an authoritative source of investment wisdom and money management. Buffett also serves as an oracle for both business leaders and us common investors — an oracle of proper perspective, investment perseverance, and hope in our common future!

It is common knowledge that U.S. companies are sitting on a record level of profits and cash. One would think that this would lead business leaders to re-invest in the future of the companies they manage; but such has not been the case. Many have been restraining capital investment at below normal levels, waiting for better conditions to somehow emerge.

Buffett and Berkshire stand in sharp contrast. Buffett is proud of the nearly $10 billion that Berkshire devoted to capital investment (expenditures) during 2012 – a record for the company and an increase vis-à-vis 2011 of (get this) 19%!!  In and of itself, that nearly 20% boost in capital investment would be a testimony to Buffett’s vision and confidence. However, considering that a large percentage of Berkshire’s businesses are in very non-capital intensive businesses (such as various insurance and financial companies), Buffett’s enormous commitment to, and faith in, the future is remarkable!  He reports that he has given a “green light” to even larger capital investment in 2013.  Befitting the role of “oracle”, Buffett is not shy about testifying to his fellow “captains of industry” about the importance of faith and hope in corporate management.  Get a load of the pointed commentary he offers in his letter:

“American business will do fine over time. And stocks will do well just as certainly, since their fate is tied to business performance. Periodic setbacks will occur, yes, but investors and managers are in a game that is heavily stacked in their favor. (The Dow Jones Industrials advanced from 66 to 11,497 in the 20th Century, a staggering 17,320% increase that materialized despite four costly wars, a Great Depression and many recessions. And don't forget that shareholders received substantial dividends throughout the century as well.)

“Since the basic game is so favorable, Charlie and I believe it's a terrible mistake to try to dance in and out of it based upon the turn of tarot cards, the predictions of “experts,” or the ebb and flow of business activity. The risks of being out of the game are huge compared to the risks of being in it.

“My own history provides a dramatic example: I made my first stock purchase in the spring of 1942 when the U.S. was suffering major losses throughout the Pacific war zone. Each day's headlines told of more setbacks. Even so, there was no talk about uncertainty; every American I knew believed we would prevail.

“The country's success since that perilous time boggles the mind: On an inflation-adjusted basis, GDP per capita more than quadrupled between 1941 and 2012. Throughout that period, every tomorrow has been uncertain. America's destiny, however, has always been clear: ever-increasing abundance.

“If you are a CEO who has some large, profitable project you are shelving because of short-term worries, call Berkshire. Let us unburden you.”

When I read Buffett’s not-so-gentle tweaking of his colleagues, I was awed. “Oracle” may not quite adequately capture what Buffett can be for business leaders who truly listen.  What’s more, I confess that he spoke to me, as well.

I beg to differ. As do all too many other traders and investors (I spend large portions of each weekday trading stocks and options), I am uneasy and anxious more often than I am steady and confident in the future of the U.S. markets.  I personally felt the weight of Buffett’s critique. As a consequence, I have committed myself to extending the length of my investment horizon from the “next hour” to something much more akin to the “next decade”. I am confident I will be the better for it.

I look forward to sharing at least one other key lesson from Buffett’s rich and textured shareholder letter (his fascinating discourse, akin to a “mini-class”, on “dividends”) in the weeks ahead.

Should You Buy Hertz Stock Now?