In Part I, we presented a deep background look at a company that made headlines in May because it announced a major new acquisition that will further change the North American “Death Care” industry. The name of that company is Service Corporation International (SCI)

Prior to 2012, the major industry consolidators in North America were Service Corporation International (SCI), Stewart Enterprises (STEI) and Carriage Services Inc. (CSV).   However, as of the May announcement, SCI has contracted to buy STEI  for $1.2 billion – thereby creating a relative powerhouse within the death care space.

Let me hasten to add that when I use the term “powerhouse”, I use it relative to the death care industry (rather than in the typical “Wall Street” usage — such as holding more than 30-40% of market share).  Despite over 40 years of consolidation, SCI’s industry is still very much dominated by operations that are owned by a family or an individual.[1]  Prior to this merger, SCI held about 13% market share. By the end of this year (after absorbing STEI) it will hold 16-17% of industry market share. This larger company will hold the following assets, spread across forty-eight states in the U.S. and eight provinces of Canada:

$    9 Billion:     “Non-earned Revenue” (funds paid to SCI or STEI for future funeral services – a product that SCI refers to as “Pre-need Revenue”).

The market clearly likes this buyout and the prospects for the combined company. In the month prior to the announcement, SCI traded around $15.50; that price sat at $18.44 on the day of the announcement. Why does the market feel positive about the deal:

1)   The CEO of SCI, Thomas Ryan, was brought on as President (and COO) in 2002 – while SCI was still struggling with the excesses of overexpansion from the 1990’s (see chart in Part I). He demonstrated a masterful hand in “righting the ship”:

a.  Unloaded international operations to reduce the heavy debt load;
b.  Sold off excess real estate just as the real estate market was cresting;
c.  Set SCI on the strategic course that has brought it to the purchase of STEI;
d.  Focused on increasing profitably rather than market share;
e.  He became CEO in 2005.

2)    Ryan’s management team has established a track record in managing acquisitions with a deft hand, delivering on projected accretive cost savings and revenue enhancement.
3)    From the presentation to shareholders on May 29th: [2]

4)    The projected Return on Investment (ROI) of the acquired locations and assets exceeds SCI’s cost of capital in closing on the purchase (a benefit from record low interest rates).
5)    Although STEI brings with it $323 million in total debt, it also brings $516 million in annual revenue and $78 million of cash.
6)    SCI will finance the deal through a mixture of cash, long-term debt, and pre-payable short-term debt.
7)    Because of the nature of its business, cash flows are very steady and dependable, so servicing the debt will not be an issue.
8)    Very significantly, SCI will continue its current dividend (about 1.6% yield).
9)    Projections show that the savings that will result from integrating STEI with SCI (through leveraged buying power and elimination of duplicate back office operations) will approximate $60 million – or about 11.4% of STEI’s existing annual revenue!
10)    From the May presentation:

11)    Ryan has successfully “branded” its national network of funeral providers.

a.    This network will continue to grow, thereby increasing the public’s awareness of it and leveraging the value of the brand for shareholders.
b.    The network has its own, separate website, with a variety of resources for “pre-planning” or to fulfill a current need: http://www.dignitymemorial.com/en-us/index.page

There are obviously other factors to consider in ascertaining the attractiveness of SCI shares:

a.   However, excluding the aberration of the 1990’s industry excesses, SCI has been much steadier

2)    It is the industry leader in cost management, and therefore Return on Investment (ROI):

a.   SCI’s trailing ROI is close to 12%, while the industry ranges between 10% on the upside to various levels of loss on the downside.

3)    The industry is heavy on fixed costs, but provides steady cash flow, so as management increases brand identity, grows utilization, and manages cost, the incremental increase in revenue “fall to the “bottom line” (as is true for other highly leveraged businesses).
4)    There are high “cost of entry” barriers for new operators in the industry;

a.   Because of SCI’s scale and experience, it is very unlikely that any new entrant will ever compete with it.

5)    There is absolutely no danger of SCI’s business becoming “obsolete” (unless a “cure” for death suddenly appears).
6)    Because of the above, combined with SCI’s buying power, it has pricing power available to it. 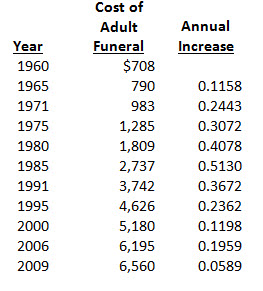 7)    Fund ownership is significant, including Fidelity (over 12%), BlackRock (over 8%), and Vanguard (over 5%).
8)    SCI has had a solid record of buying back shares; it plans to continue its existing $2 billion plan for share repurchases.
9)    The $9 billion of “unearned revenue” is a potential boon to the bottom line if SCI can secure an average investment return on that huge pool of assets that exceeds the average rate of increase on SCI’s cost to provide the related funeral services promised (through their “Pre-Need” contracts).

At this point, you might be thinking that SCI is a “no-brainer” for your portfolio. However, before you “leap”, consider these risks (a list that I do not claim is exhaustive):

1)    There is a growing trend toward cremations – a trend that results in lower revenue and less profit for SCI.

a.   However, SCI has been expanding its relationships with and involvement in the cremation side of the death care industry.
b.   Demonstrating SCI’s pragmatic realism with regard to this topic, it has developed a “brand” (“ADVANTAGE”) through which it can provide “basic”, low-cost funeral services to those who prefer that level of service:

2)    As Chinese philosophy points out through the Yin-Yang concept, the potential “plus” for SCI of its $9 billion cash trove of unearned revenue also carries with it a very significant risk:

a.   If investment managers fail to produce returns in excess of SCI’s cost of providing services, the difference will hurt SCI’s bottom line;
b.   During the 2008 market crash, the investment pool suffered over $600 million in unrealized losses;
c.   The same is true for the “Perpetual Care Trusts” SCI manages to ensure perpetual upkeep of its cemeteries.

3)    The cemetery business is much more volatile than the funeral business. It has greater fixed cost relative to annual revenue (therefore higher operating leverage).

a.   Success within that part of the SCI business will depend upon continued growth within the advanced sale of cemetery plots.

4)    I personally believe that SCI is a bit over-priced at this level. See my observations below.

Below is a graph of the past six months’ price action on SCI. Not surprisingly, it now sits below both its 5-day and 20-day Exponential Moving Average. However, it remains above the Simple Moving Average levels of 50-days and 200-days. If you find SCI appealing, I suggest you target one of those levels. Also notice that, prior to the announcement regarding its $1.2 billion purchase of STEI, SCI was sitting below $16/share.

Normally, you might turn to the options market for a play on getting the stock at the price level you prefer. However, if you review the options available, the open interest levels are pathetic, so the options have little liquidity and huge spreads. Therefore, your best option (pun intended) may be to set an alert on your trade platform at a price level you would find appealing.

Finally, consider your emotional response to my regular references to the “death care industry” throughout this narrative. If you were uncomfortable or “squeamish” about some of the dimensions surrounding this SCI business plan, that may be a tip to you that you are better off not owning it.

[DISCLOSURE: the author does not own shares of SCI. The stock charts were created through YahooFinance.com].

[1] No less an authority than the National Funeral Directors Association reports that well over 80% of all local homes are owned by an individual or a family.