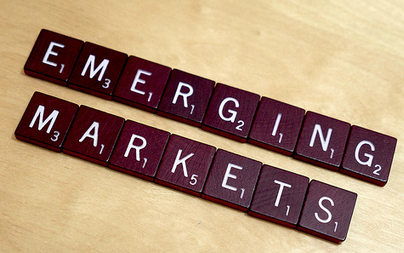 EMERGING MARKETS have become a key asset class within a diversified portfolio... a class within which the average U.S. investor is likely under-allocated

In that context, it is worthwhile to note that, throughout the past couple of decades, one of the most consistently volatile equity spaces has been that of “Emerging Markets”, as we can see in this chart of its biggest and most liquid ETF: iShares MSCI Emerging Markets (EEM): 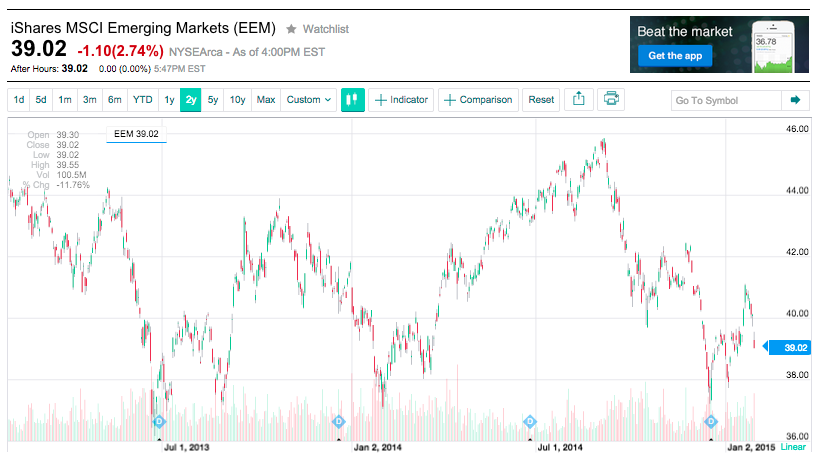 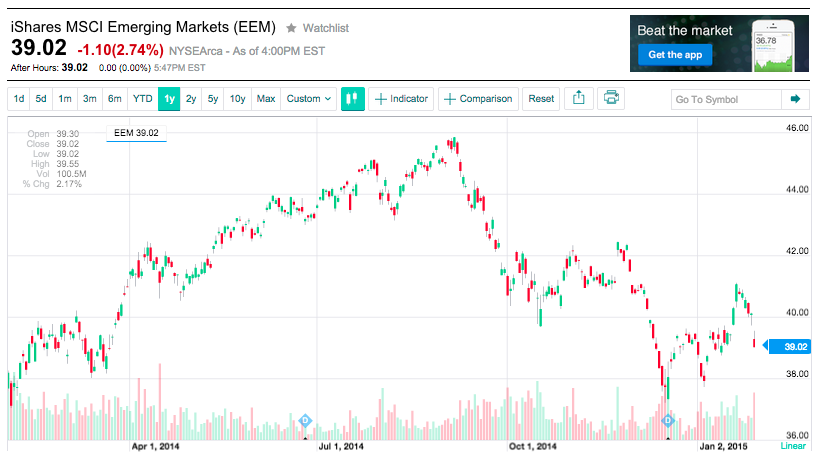 The one-year chart does not look any less volatile. 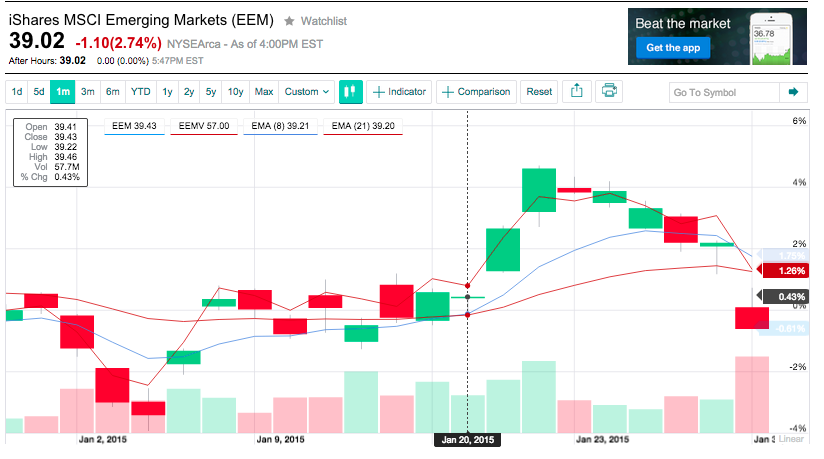 On January 20th, the 8 day exponential moving average (EMA) crossed up over the 21 day EMA

We have just entered into February, and (alas) anyone who purchased EEM based on that “signal” is (at least through January 30th) sweating out the trade…. because after initially shooting upward, EEM has since fallen off.

A word of caution is warranted here.  The Emerging Markets space is significantly more volatile than the S&P 500 Index within the U.S.:

ETFReplay.com offers great graphs comparing the relative total return and volatility reflected in different ETFs. Here we see that over the prior 24 months, the S&P 500 has far outperformed the EEM, while simultaneously experiencing significantly less volatility!

Let’s consider some of the reasons why the Emerging Markets space is more volatile than the U.S. market (on average):

2) More volatile currency (example, when the U.S. Federal Reserve whispered “Taper” in May of 2014, the emerging markets were among the most significantly impacted).

3) More dependent upon natural resource products (including agriculture and mining) instead of manufactured products. 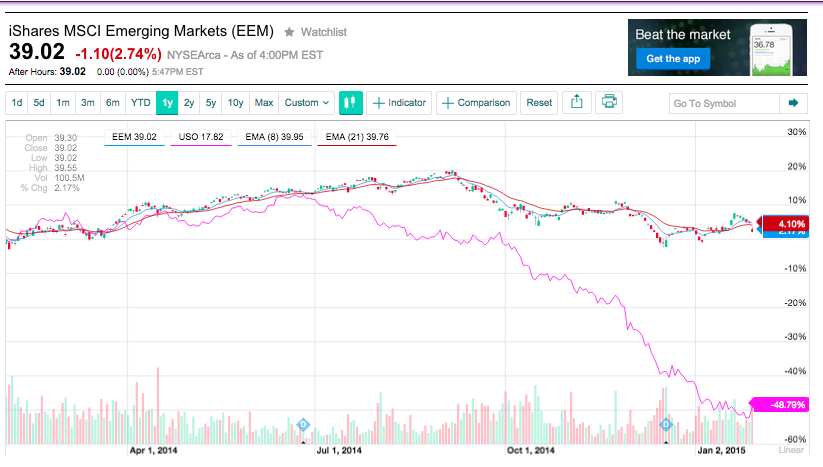 This graph comparing EEM with USO, hinting at the negative impact of falling oil prices on the economy of some EEM countries. There is clearly not a "one to one" correlation... but it did have a negative impact on EEM through the second half of 2014!

4) Market expectations/confidence are not as firmly embedded with regard to emerging market stocks as they are toward “Developed Market” equities.

Everyone who watches the daily financial news knows what a prominent (and manic depressive) role economic news reports coming from China plays within daily market activity (in my opinion, a disproportionate role). Add that fact to the fact that a number of key emerging market countries depend upon oil exports (like Russia) and precious metals exports for economic success… and it is no wonder that EEM has had a wild run in recent months! [And don’t forget that Brazil is a major component within EEM… what a mess!]

However, for those who enjoy regular trips to Las Vegas … and are imbibed with a spirit of adventure… the Emerging Market space can be an interesting point of focus!

Here are some key descriptors related to EEM: 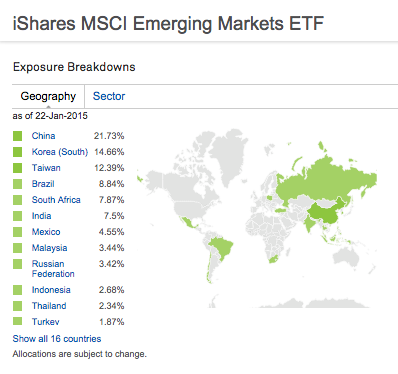 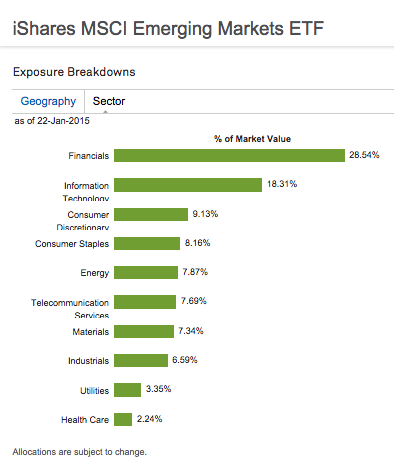 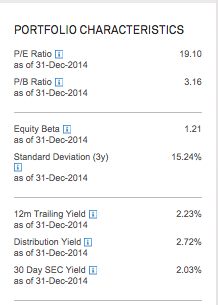 The two most obvious “trading pluses” of EEM are:

2) Volatility is higher so you could capture (on average) higher premium through credit spreads.

Of course, the above two “pluses” assume that you have a discipline and expertise capable of capturing trading profits through these features within the emerging market space!

It bears mentioning, as well, that there have been years (before 2010) when the Emerging Market Space has outperformed the U.S. S&P 500 Index!

Besides the “8 EMA/21 EMA Crossover” on January 20th, why am I writing about this topic now?

2) If Russia has found a bottom (another sizable “if”);

the Emerging Market space could prove quite profitable.

But is there a “better way” to take a position within that space than EEM?

During the rest of this article I will endeavor to explain why I think there is such a “better way”.

Let’s take a look at two other ETFs within the Emerging Market space and compare them to EEM: 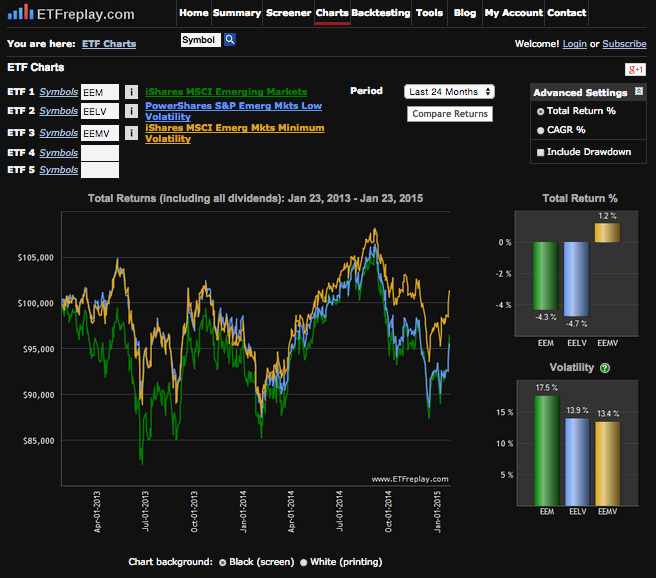 Understanding that the GOLD-colored ETF outperformed both the GREEN-colored one (EEM) and the BLUE-colored ETF over the past two years by over 16%… while experiencing significantly less volatility… which ETF would you rather own?

Why of course you’d rather own the GOLD-colored ETF!

Since you are surely wondering what the “Secret Sauce” is that enabled the GOLD ETF to perform so much better… it is through the use of a “Minimum Volatility” strategy[2].

The ultimate objective of ETF strategies that focus on adjusting Volatility within any particular portfolio is to achieve a Risk-Adjusted Return that is superior to a related “standard index”.  Another way of saying this is that the “low vol” funds endeavor to “capture Beta, while offering better Alpha”![3] In this case, the “standard” index [which the others are trying to outperform] is the MSCI Emerging Markets Index.   …

At this point (if you did not already read it) you will greatly benefit from accessing and reviewing our recent article on “Low Volatility” strategies:

Lest you wonder if the two-year performance shown above was no fluke.  Here is the relative performance of these same ETFs over the most recent 12-month period: 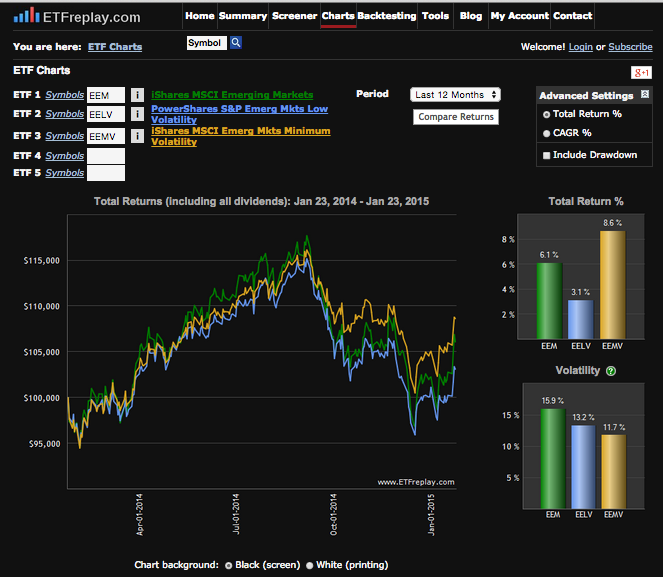 I think you will agree that on a Risk Adjusted basis[4], EEMV has demonstrated outstanding relative performance!  Therefore, let’s dissect a bit of the characteristics of the EEMV ETF: 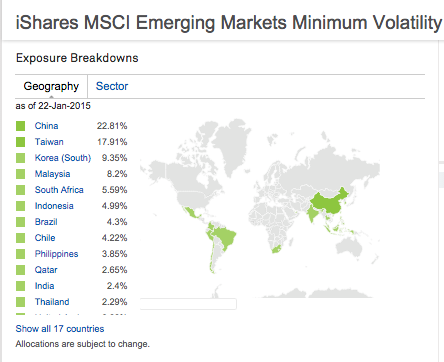 Here is the GEOGRAPHIC exposure within the EEMV portfolio. Note that the "geographic" allocation is not dramatically different than that of EEM! 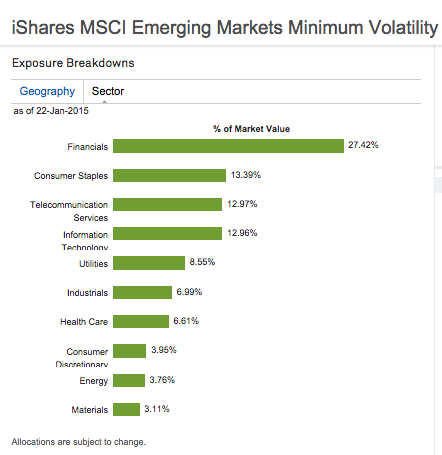 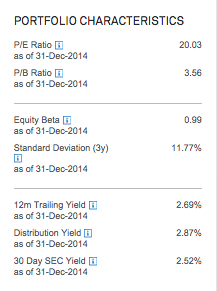 Financial experts agree that the “average” portfolio will benefit over time from an allocation within the Emerging Markets space.  For example, EEM is not highly correlated with either U.S. Equities or U.S. Fixed Income, so the portfolio is thereby diversified via both a broader geography and a greater number of company stocks.  Consequently, there are worthwhile benefits that can accrue within a portfolio when it captures some of the economic growth for which those markets are famous.[5]

In addition, as was suggested earlier in this article, the emerging market space can be fruitful as a trading vehicle (primarily swing trading) for those who are both knowledgeable and willing to accept and manage greater risk in return for a potentially greater reward.

The most important question I am posing to you today is this:

“Is the EEMV ETF a more attractive vehicle for these purposes than is the EEV ETF?”

I will leave the answer to that question for you to answer upon further review and reflection.

The author owns mutual funds within the Emerging Markets space (but neither EEM nor EEMV) because the particular account within which that allocation is located does not permit the use of ETFs. Nothing in this article is intended as a recommendation to buy or sell anything. Always consult with your financial advisor regarding changes in your portfolio – either subtractions or additions.

[1] Government controls on the Real (currency) and horrible scandals within the internationally famous Petrobas (PBR), along with fiscal issues, have done great damage.

[2] “Minimum Volatility” and “Low Volatility” are each among the number of “Smart Beta” strategies that have come into vogue since the Financial Crisis of 2007-09.

[4] As you read in the referenced “Low Volatility” article, the most commonly used metric for “Risk Adjusted Return” Is the “Sharpe Ratio”.

[5] Over the course of an economic cycle, emerging growth economies demonstrate greater average annual growth vis-à-vis “developed” economies … but that growth is more volatile and cyclical.

Why ApeCoin Was Roaring on Sunday