As I walked through the downtown Chicago Loop area very early Saturday morning (on my way to an all-day investment webinar) I saw a Skechers Shoe store. That caught me by surprise because, although I am very familiar with Skechers shoes (I have owned and worn one pair of Skechers for at least the past six years, and I assure you they are the most comfortable shoes I have ever owned!), I was not aware of any store dedicated to Skechers. I made a mental note to check on its stock when I returned home Saturday evening.

Skechers USA, Inc. (SKX) designs, develops, markets, and distributes a wide variety of footwear for every age group, and its diversified sales network ranges from its own website and retail stores, to outlet stores, a variety of retailers, and even boutiques and internet retailers.[1]  The company is 21 years old and is headquartered in California.

A couple of hours of research uncovered a fascinating story of a company that has moved through very good times and very challenging times. The challenging times included the 2011 FY, when earnings tanked sharply… following a nice recovery in 2010 from the almost universally dreadful 2009-09 period!

Another challenging period resulted from SKX’s attempt to profit from the strong “shape up” trend prevalent within the U.S. and the shoe fashion world. SKX introduced four styles of footwear that catered to that clientele: “Shape-Ups”, “Resistance Runners”, “Podded Sole Shoes”, and “Tone-Ups Non-Podded Sole”.  Because I am not an attorney and am not familiar with all issues involved, I will restrict my comments to the simple fact that SKX was held responsible by the U.S. Federal Trade Commission for marketing these shoes in a manner which lead (or “mislead”) buyers into thinking that, by wearing the shoe(s), their physical appearance and/or condition would be improved.[3]  As a result of that action, SKX “stepped up” and committed $40 million to recompense customers for any harm experienced (paying out between $20 and $42 per shoe (depending which style was purchased) as properly filed claims were received).  That settlement process was wrapped up this year.[4]

In late July, SKX posted an impressive earnings report that caught analysts by surprise – demonstrating conclusively that it could rebound from its disastrous 2011 year. Management pulled that off by developing new products and diversifying its product line. The result has been performance improvements within both the “top” and “bottom” lines of company data – which gave grown steadily over the most recent four quarters. In addition, SKX gross margins have improved.

So far, I imagine you are impressed. However, the discerning reader will ask – “How did competitors fare during the past year?” 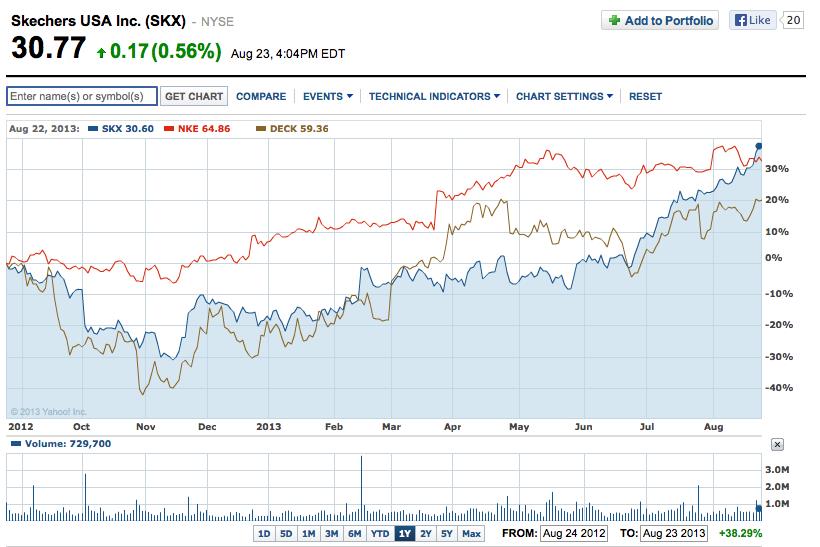 Here (above) is a price chart of SKX (blue), Nike Inc. (NKE) (red), Deckers Outdoor Corp (DECK)(brown). As you can see, NKE outperformed SKX and DECK all year, until July, when SKX made a furious rally to trend above NKE during the period shown!!  Meanwhile, DECK has lagged during most of this year – in part because one of DECK’s major sellers has been the “Ugg” brand, which has seen sales fall by almost 7% during the most recent period![6]

Below is another interesting graph. Because NKE is so much bigger than either SKX or DECK[7], I show you revenue growth data versus price levels on SKX and DECK. The main “take away” here is to notice that SKX revenue was much more cyclical during this three year period, but the price was less volatile than for DECK.

That said, the next graph (below) shows a slightly different pattern. This graph contrasts “free cash flow” and stock price for both SKX and DECK. In this graph, DECK shows much greater variability on the financial metric (free cash flow), and (as before) has the more volatile price action.

The final graph shows book value per share and price for both of these stocks. It would appear that, during these three years, the price action on both DECK and SKX is largely independent of the book value/share. In particular, notice the relatively steep move upward in DECK’s book value/share, while its price seems to ignore that climb.

So you will not wonder what similar data from NKE looks like (relative to SKX), I provide them below.  There isn’t anything particularly startling that you will find there, except that the price of NKE (being so much bigger) does not seem to be as responsive to data as SKX (which should not surprise us). Here is the first NKE graph (book value/share):

At this point, I want to wrap up by offering a few fascinating quotes from two of the world’s greatest “value investors”: Benjamin Graham and (you guessed it) Warren Buffett!!

You’ve already seen how variable the price charts of these three shoe companies can be. I showed you before that DECK underperformed both other companies during most of the past year. However, that said, take a look at this graph (year to date): 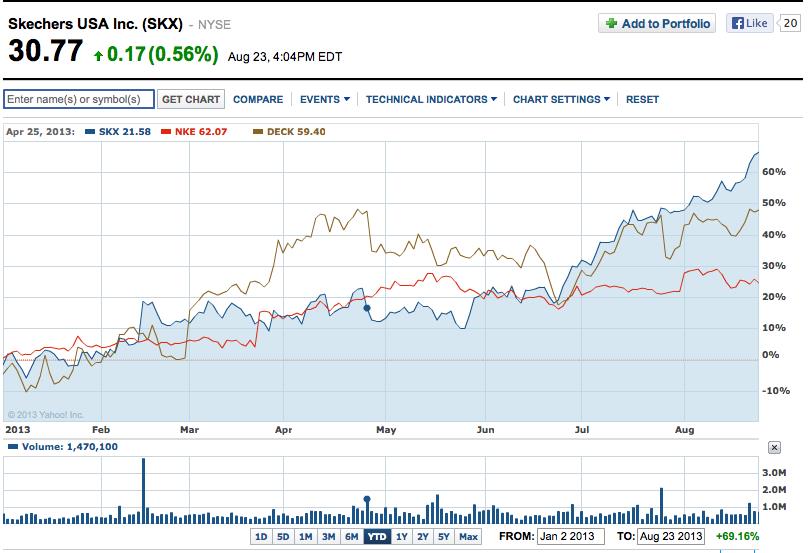 DECK has been outperforming NKE for most of this period, and outperformed SKX until very recently!  Keep that in mind as we take a look at the graph below that shows all three shoe companies beating the S&P 500 Index (red) over the past five years! 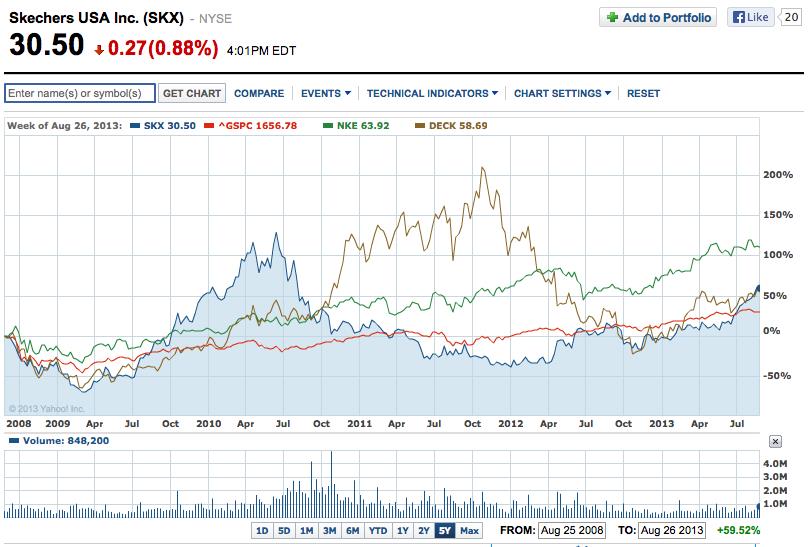 What do you think we can deduce from all of the above?

That strikes straight to the points I think are germane to this article’s main “teaching points” for you and me!!

“…we advised the readers to buy their stocks as they bought their groceries, not as they bought their perfume. The really dreadful losses of the past few years (and on many similar occasions before) were realized in those common-stock issues where the buyer forgot to ask, ‘How Much?'”

If and when you ever consider buying SKX (or any other stock), do not forget to consider the question: “How much?”  It is easy for me to say that SKX was a “steal” in 2011, at the height of its multiple difficulties. However, if you had reason to trust the management team of SKX and recognized the inherent quality in SKX shoes, buying SKX would have been an easy (and great) choice!

A corollary to the insight above is:

“Although there are good and bad companies, there is no such thing as a good stock; there are only good stock prices, which come and go.”

SKX, NKE, and DECK are each “good companies” – a fact they have established through years of above average performance. However, at various times during the past five years, each one has stood at a price that was not as good (relative to value) as other available choices.

And here is a similar, but much more entertaining, quote from Mr. Buffett:

“If you buy a stock at a sufficiently low price, there will usually be some hiccup in the fortunes of the business that gives you a chance to unload at a decent profit, even though the long-term performance of the business may be terrible. I call this the “cigar butt” approach to investing. A cigar butt found on the street that has only one puff left in it may not offer much of a smoke, but the “bargain purchase” will make that puff all profit.”

Mr. Buffett thereby offers a perfect description of why it made sense to buy SKX back in 2011. As we have seen, SKX has actually seen four consecutive quarters of “hiccups”, which has produced a huge boost in price.  Therefore, from a strategic “big picture” view, a strategy to consider, had you purchased SKX in 2011 or early 2012, would be to sell it now and move on to your next great “cigar butt” purchase!!  The same can be said of either NKE or DECK, but in tandem with each of those stock’s unique cycles of profit success or profit challenge.

DISCLOSURE: The author does not currently own SKX stock or options, but absolutely loves his SKX shoes!!   Nor does he own NKE or DECK.[9]  I should also mention that the SKX COO (David Weinberg) sold 25,000 shares of the company’s stock in a transaction dated Friday, August 23rd (average price of $30.51) for a total value of $762,750.00. I hasten to add that the development is neither unusual nor uncommon. I could have easily done the same thing for a variety of reasons, including buying real estate, paying off a mortgage, etc. Nothing in this article is intended as a recommendation to buy or sell anything. Always consult with your financial advisor regarding changes in your portfolio – either subtractions or additions.

[1] The title derives from a 1989 quote from Warren Buffett in Berkshire Hathaway’s 1989 Annual Report. You’ll see how it “ties in” at the end of this article.
[2]Note to self: find a new pair on the internet because your current Skechers look like they’ve been through a war!
[3] All the financial metric graphs used in this article are prepared through YCharts.com
[4] Famously, one commentator remarked that some female customers hoped to end up with a “Kardashian booty” by wearing the shoes.
[5] The Federal Trade Commission announced in July it sent out 509,175 checks to persons who had purchased a qualifying SKX “toning shoe”.
[6] As outstanding as that growth appears, it is even more impressive when you know that Easter fell into Q1 this year (versus Q2 the prior year)!!
[7] All the price graphs (without financial metrics) are prepared through YahooFinance.com
[8] NKE’s market cap is $57 billion; DECK’s market cap is $2 billion; SKX’s cap is $1.8 billion
[9] Never forget, my friends, that Warren Buffett did not “create” his investment approach on his own. He regularly credits Benjamin Graham as being the biggest influence in his professional trading growth!
[10] But he did recently buy a pair of DECK shoes at a steep discount!