The S&P 500 is right back to where it started on Monday morning. It bounced nicely off its 50-day moving average. This could be a cyclical bottom, a classic reversal that makes a good entry point for bullish bets. 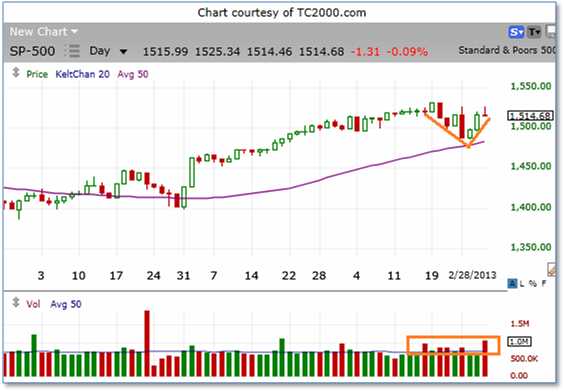 Not so fast. The two rebound days, Tuesday and Wednesday, were on below-average volume. Yesterday's candlestick is what's called a ‘Gravestone Doji', and where it formed, after two days up, can mean “that's it for now”. The fact it occurred on high volume, and the high formed a lower high than eight days ago, doesn't paint a good picture for the near term.

But let's give the market a day or two more, time to try on its new ‘sequester' suit, to walk around in front of the mirror and get a feel for how it looks.

In the meantime, TLT, the ETF representing longer term bonds, has been regularly cycling up and down. It may have just formed another short-term high. 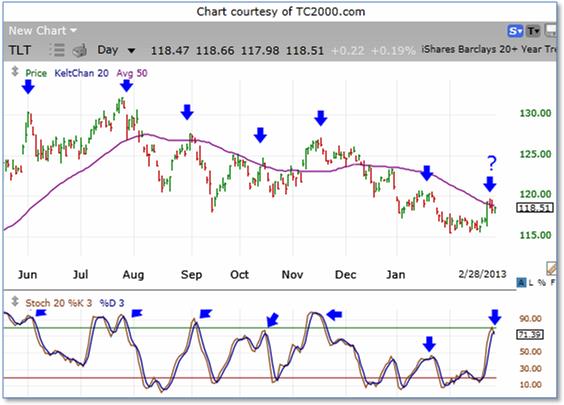 If I wanted to play a move down from a likely short-term high, shorting a $120 stock (ETF in this case) does not interest me.

Since previous drops off short-term cycle highs happen rather quickly, a near term in-the-money put may work as a lower-cost surrogate for shorting the stock. If I wanted the same exposure as shorting 100 shares of TLT, a March 124 Put could do it. There are 14 days left in March options. That should be enough time.

Let's look at the numbers:

Is there any other factors in favor of a downward move in TLT, to give such a bearish bet more ‘tailwinds'?

For a 2 week or less trade, it's hard to make any kind of case with seasonals or fundamentals. But if I was going to consider a longer-term bet against TLT, there are arguments for both.

Fundamentally, bonds may be near their peak. This is the best article I've seen describing how the reward-to-risk level on bonds makes them a poor bet for the upside:

If money keeps moving from bonds into stocks, regular downside bets on TLT may work well.

Kroger Rolls Out Rapid COVID-19 Antibody Tests at Its Pharmacies